Should we look past the US Q1 soft patch?

Friday was another disheartening day for US economic data and has left dollar bulls in doubt entering this week. Focus shifts to pivotal European economic releases, as the lack of tier one US economic announcements this week, will leave US investors lamenting on Friday’s weaker retail sales and disappointing consumer price index prints. Given the recent trend of deteriorating US data, set against a backdrop of other G-10 economies that have surveyed data print above expectations, if this bias persists it may bode poorly for the US dollar’s performance this week.

We can sugar-coat Friday’s retail sales data, which rebounded from two sluggish months and was mitigated by a three-tenth upward revision to March. But the cold, hard fact is that the figures grew just 0.4%; badly missing market expectations of 0.6%, which did little to convince investors that a recent run of weak US economic performance was reversing. While confidence was extremely elevated for a high rebound after a poor print in March, the dollar may have got off easy this time, as the Fed had already warned the market that they would look through the Q1 US economic soft patch, so why shouldn’t traders? If the deterioration in tier one US economic data continues, I think it will be time for a reality check, as both the market tonality, along with Fed policy expectations, could yaw significantly.

While the CPI missed the Fed’s 2% mandate level, the print itself is unlikely to alter June rate hike expectations. A miss on both Retail sales and CPI is concerning and resulted in a modest repricing for hike odds to just over 70% in June and only a 50%.But US labour markets remain robust and parsing the recent Fed speak; there is little slack left in labour markets, so the FOMC will likely remain unwavering on it’s tighter policy path.

Trying to extract juice from the Aussie dollar trade has been little more than an exercise in futility of late. Thwarted on the downside by commodity price basing, and struggling to stage any meaningful topside momentum due to lingering concerns over China’s ‘Moneyball’ reduction. Fleshing out convincing signals amongst a myriad of global and domestic narratives has traders increasingly frustrated.

Friday’s jump above .7400 after Friday weak US data was faded, suggesting focus remains on the emphatically weak Australian consumption data and uncertainty over the commodity landscape.

The base metal view is mixed: copper higher, while iron ore regained a foothold above USD 60 per tonne after there was a 3% drop in China iron ore futures on Friday. But momentum remains clouded as a weaker US dollar on Friday failed to excite commodity investors, suggesting that tighter monetary conditions in China are taking a bite out of demand. Parsing President’s Xi’s recent comments, regulators are committed to weed out excess leverage throughout the economy and commodities could continue to struggle near term as China deleverages.

The market has opened flat to Friday’s close, as dealers await a round of fresh economic data from China which could steady the Aussie dollar market. This morning’s China retail sales, industrial production and fixed asset investment will garner some attention after a recent soft patch in Mainland’s economic data.

In the meantime, in the absence of any spark, look for dealers to go through their daily ritual of selling rallies above .74 and buying dips too.73 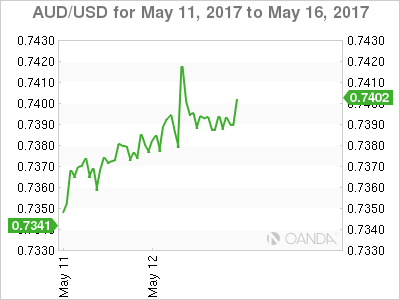 Dollar-Yen ground lower on the data, as dollar bulls were chop blocked by a slide in US Treasuries, which triggered stop loss orders at 113.50 on the way to a low of 113.20 before recovering. The bullish bond tone was then further aided by Chicago Fed Charles Evans, who said he thought ‘downside risks [for inflation] still predominate.’

In a show of defiance, North Korea conducted a ballistic missile on the weekend, which has had little impact on risk so far as it was not the intercontinental variety, but there remains a very cautious mood in first markets eerily reminiscent of April trade.

We could see USDJPY struggle this week in the absence of any tier one US economic data to ignite the dollar bulls, as dealers shift their focus to Japan’s preliminary GDP data to be released on Thursday, as an acceleration in economic activity would suggest a higher probability for the BOJ to consider tapering. 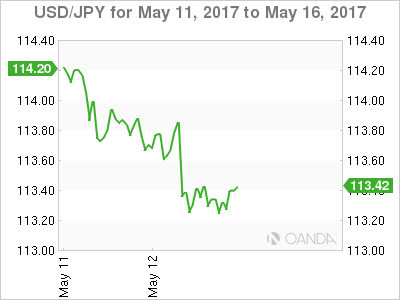 The EURUSD has surged on weaker US data and aided by an ECB source cited by Der Spiegel who stated that starting in July, the ECB would prepare markets for exit from ultra-loose policy; followed by starting in the fall to lay out plans for exit from QE. With political risk abating, the euro longs held steadfast above the critical support level last week, anticipating some ECB hint of policy convergence with the US.

Traders did take note of weekend elections held on Sunday in Germany’s most densely populated North Rhine-Westphalia. Angela Merkel’s conservative party scored a big victory, dealing a knockout blow to Martin Schulz’s ambitions. With no election surprise, the EURO has held on to Friday gains.

In the meantime, I expect offers to remain substantial between a 1.0950-.75 level which was the top of the range before the French election run up. 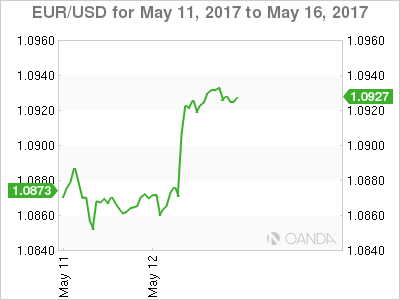