U.S. sanctions have not been able to push the Iranian oil production but the coming months could put pressure on the Saudi spare oil capacity

The consequence of this measures in Iran will affect companies which are indirect business with other foreign firms. Iran’s supreme leader Ayatollah Ali Khamenei, has denounced the measures as a disgrace to US prestige and he is confident that these measures have already made the U.S. relation with other countries worse. The Trump administration would make the U.S. position weaker and the country would be a loser in the longer term.

U.S. Secretary of States Mike Pompeo has said that the sanctions would be reimposed and Iran would need to change its stance of conducting things. Traders are on high alert and watching the oil market very closely. Under the reimposed sanctions, the mission is to bring the oil export near to zero. Currently, the country is producing nearly 3.4 million barrels per day. The October’s production is down only by 10,000 barrels per day. The spare capacity for the country stands at 4.0 million barrels per day.

Eight temporary waivers have been issued for countries which have made significant moves toward shunning import of Iranian oil. Japan, India and South Korea are getting the waiver and China is in talks for a waiver along with Turkey and Taiwan.

Some completely closed mind individuals think that the waiver which are granted are too generous and the U.S should stop all Iranian banks from using its SWIFT system. Unlucky for them, the counter-reaction is already in play.

The long-standing ally of the U.S., Germany, France and the U.K. have said in a joint statement that the U.S decision to reimpose the sanctions is “deeply regretful”. They are going to work together to carry on their legitimate work relation with the Republic of Iran and provide a system and protection for the European economic operators.

Only Saudi Arabia, the leading player of the OPEC committee, has the ability to fill in for the lost supply. Saudi oil production touched a level of 10.68 million barrel per day, an increase of 150K b/d. The spare capacity of Saudi Arabia stands at 11.5 million barrels per day. OPEC has increased its output by 430K barrels to 33.33 million barrels a day during October, this was the highest amount since 2016. 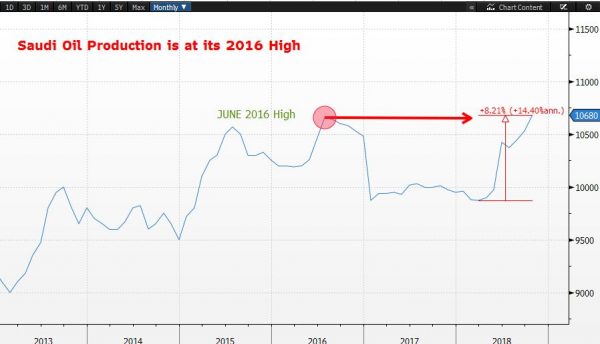 The oil market has been somewhat stable as traders are not overreacting. They think that the increase in the oil production by other oil members and most importantly the waiver for some nations would continue to support the Iranian oil supply. On top of this, we have demand curve shifting adversely and this has eaten up a lot of market’s strength.

Back in October, the oil price surged towards its four-year high, but ever since, the rout in the global equity market stoked concerns about the fuel demand. Looking at the prices now, one could easily see that the price is near the bear territory. It has dropped nearly 16.04% from its peak. 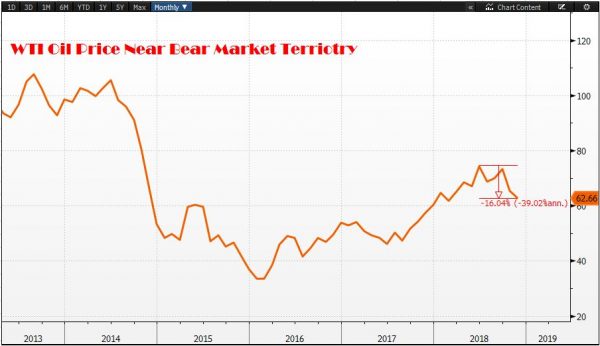 The OPEC committee needs to pay attention to the increase in the oil production levels because the Iranian oil production isn’t slowing dramatically. The fear of supply glut would surface again if there is no restraint in output by 2019.

WTI Futures May Have More Weakness in Store in Short Term

UK to introduce digital tax in April, US threaten retaliation with auto tariffs