On the data front, the Euro-zone’s final consumer price inflation slowed for the third consecutive month to 1.4% on an annual basis in January, confirming the preliminary print and in line with market expectations. In the previous month, the CPI had recorded a revised rise of 1.5%.

Separately, in Germany, seasonally adjusted final gross domestic product (GDP) remained steady on a quarterly basis in the fourth quarter of 2018, at par with market expectations and confirming the preliminary print. In the prior quarter, GDP had registered a drop of 0.2%. Meanwhile, the nation’s Ifo business climate index slid to its lowest level since December 2014 to 98.5 in February, compared to a revised level of 99.3 in the prior month. Market participants had envisaged the index to ease to a level of 98.9. Moreover, the Ifo business expectations index unexpectedly declined to a level of 93.8 in February, defying market expectations for an unchanged reading. In the prior month, the index had registered a revised level of 94.3. Further, the Ifo current assessment index dropped to a level of 103.4 in February, more than market consensus for a decline to a level of 103.9. In the preceding month, the index had registered a revised reading of 104.5.

In the Asian session, at GMT0400, the pair is trading at 1.1342, with the EUR trading a tad higher against the USD from Friday’s close.

Amid lack of macroeconomic releases in the Euro-zone’s today, traders would focus on the US Chicago Fed national activity index for January and the Dallas Fed manufacturing activity for February, scheduled to release later in the day. 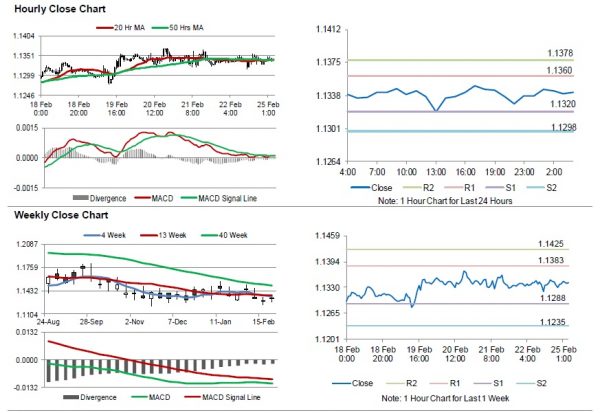 Euro Reverses Its Gains In The Asian Session