The Canadian dollar is trading near its 2019 lows against the US dollar as investors await the employment report for April on Friday at 1230 GMT. Stronger figures in employment may provide some more relief to the domestic currency, sending dollar/loonie lower. 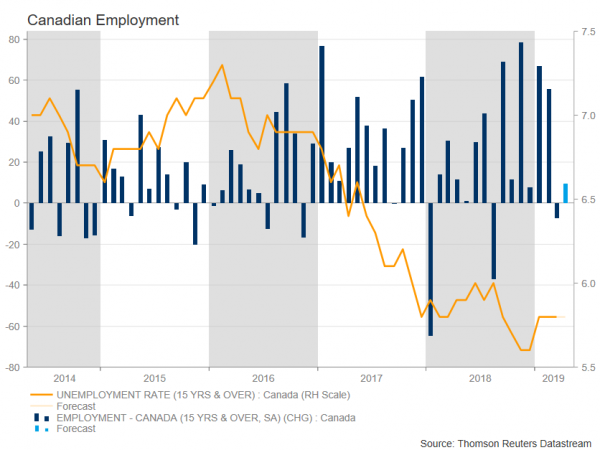 Consensus is for the unemployment rate to hold at 5.8%, which is the highest level since October while the net change in employment is expected to show that the economy added 10,000 jobs from an unexpected drop of 7,200 jobs in March, its first decline in seven months. However, the participation rate is expected to remain the same at 65.7% as the preceding month, so there could be some gains ahead for the loonie if wage growth and employment numbers show some improvement in the labour market. After a surprisingly weak print in March, the labor market is waiting for a modest rebound in these readings.

The Bank of Canada (BoC) left its interest rates unchanged at 1.75% on April 24, as widely expected, which is the highest rate since December 2008 but avoided to signal any need for future hikes and lowered its growth forecast for this year. The Bank, which has increased interest rates five times since July 2017, mentioned that it expects growth to advance in the second half of the year, as housing activity stabilizes and consumer spending is underpinned by growth in employment income.

On May 6, the Bank of Canada’s Governor Stephen Poloz in a speech in Winnipeg was optimistic for the growth in the housing market despite various challenges and referred that a supple mortgage market would support the nation for creating a better financial system.

Turning to market reaction, the Canadian dollar has been losing considerable ground against the dollar since the beginning of the year, helping USDCAD to touch a three-month high of 1.3520. However, a weaker-than-predicted jobs report on Friday, could reduce chances for a rate hike and drive USDCAD to test the 19-month high of 1.3663, identified by the peaks on December 31.

Alternatively, if the employment report shows growth or/and the unemployment rate shifts lower, the pair could return to the 1.3380 support area, around the 50-day simple moving average (SMA), while steeper declines could also revisit the long-term ascending trend line, which has been holding since January 2018.