HIGHLIGHTS OF THE WEEK

With few data releases, the return of U.S.-China trade tensions captured attention. Financial markets were volatile, but largely down as President Trump tweeted over the weekend that an increase to tariffs on Chinese imports would go into effect Friday. These sentiments were reiterated by other high-ranking U.S. trade officials who accused Beijing of reneging on its promises in earlier negotiations. This rhetoric threatened to derail planned high-level talks with Chinese negotiators; however the Chinese delegation only delayed the meetings rather than cancelling them.

The U.S. administration officially implemented the tariff increase from 10% to 25% on approximately $200bn worth of Chinese imports on Friday. Additionally, President Trump has tweeted that he plans to levy the new 25% tariff on a further $325bn worth of Chinese goods “shortly”, a move that would cover virtually all U.S. imports from China. Even as China urged the U.S. to meet them halfway, they announced that countermeasures will be implemented, although specific details have not been revealed.

Despite the new developments, talks continued on Friday as the two sides try to salvage a deal. A sticking point for the U.S., however, is whether China will agree to implement legal changes so as to facilitate the trade deal and to make the details public. China has resisted this push, insisting that it impinges on their national sovereignty.

The new tariffs will result in a more significant drag on growth if they are sustained, impacting not only capital expenditure and consumer spending but also confidence. In a recent note, we estimate that U.S. growth could be lowered by -0.1% to -0.3% with the higher tariff. Growth could fall by as much as -0.6% if the threatened $325bn becomes a reality. The run-up in inventories witnessed in prior months partially reflected preparation by businesses for this possibility, and with additional tariffs to take effect, they are likely to pass on price increases to consumers.

To date, inflationary pressures have been benign. Consumer prices in April rose 0.3% over the previous month and were up 2% year-on-year (Chart 1). However, the threatened escalation in tariffs could see inflationary pressures firm up. We estimate that consumer prices rose by 0.3ppts from tariffs already imposed and could rise by an additional 0.4ppts if the remaining $325bn of Chinese imports are made subject to 25% tariff (see note).

Despite the U.S.’s heavy use of tariffs to rebalance trade flows, their trade deficit edged up in March, reflecting the difficulties inherent in attempting to redirect international trade. Of note, the merchandise trade deficit with China, a special area of interest, has been declining for the past few months, and hit a five year low in March (Chart 2). This development may positively impact ongoing negotiations between the two economic powerhouses. All told, the U.S. and Chinese economies are at an important juncture. Decisions made now are likely to have significant implications for the global economic landscape in the future. 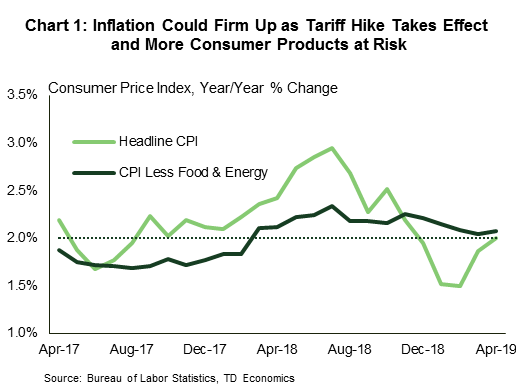 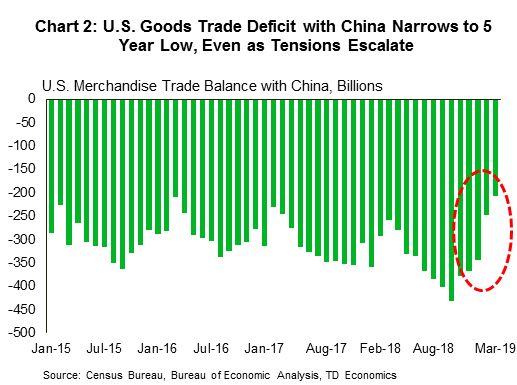 Canadian financial markets were mixed this week, with the S&P/TSX composite following global peers lower, dropping around 2.1% (as of writing), and the loonie moving sideways but remaining flat relative to last week. A mixed bag of data releases was joined by recent developments on the U.S.-China trade front. In a recent note, we highlight that the likely impact on Canadian growth if the recent increases in U.S. tariffs on Chinese goods persist sits in the 0.1%-0.2% range, with most of the impacts generated through confidence effects.

On the data front, today’s Labour Force Survey release was the main event. Labour markets continued to defy the ongoing soft patch in the Canadian economy, with a record 106.5K job gain (Chart 1) that was staggeringly above expectations for a flat print. Details of the report were just as positive. For instance, wage gains advanced 2.6% (y/y). The composition of job gains was healthy, with private sector (+84K) and full-time (+73K) hiring doing the heavy lifting. Other details were also encouraging, including an uptick in the participation rate (to 65.9%), and an unexpected but welcome increase in Alberta’s job gains (+21K).

Meanwhile, March’s international trade data offered a glimpse of hope (Chart 2). Export volumes rebounded 2.6%, and a pick-up in some consumer and investment-related import categories offered signs of optimism for domestic demand. The export bounce-back was also relatively broad-based, spanning 9 of the 11 categories, Unfortunately, much of this was eclipsed by a downward revision to already-weak February report, which left overall Q1 export volumes down 2.4%.

The economic calendar was also heavy on housing data. Housing starts surprised on the upside, surging 23% (m/m) in April to reach a 236K annualized pace. TREB data showed that Toronto home sales advanced 11% in April, an encouraging print given the subdued performance in Q1. Also grabbing attention was a speech by Governor Poloz highlighting the impacts of the B-20 regulations on the quality of new loans, and calling for changes in Canada’s mortgage markets, including longer renewal terms and a private market for securitization.

On the whole, this week’s data releases confirm that the economy’s current soft patch is likely temporary. While certainly not a leading indicator, the continued health in Canada’s labour markets should at least provide some reassurance on existing business sentiment and for consumer spending going forward. It is worth noting that the Bank of Canada’s conservative Q1 assumption was primarily driven by a drag from exports, and to a lesser extent, housing. Data has confirmed outsized weakness in these categories in Q1, but the recent reversals, and the resulting handoff provide some early indications that Q2 will likely turn in a better performance – in line with the Bank of Canada’s expectations (and our own). 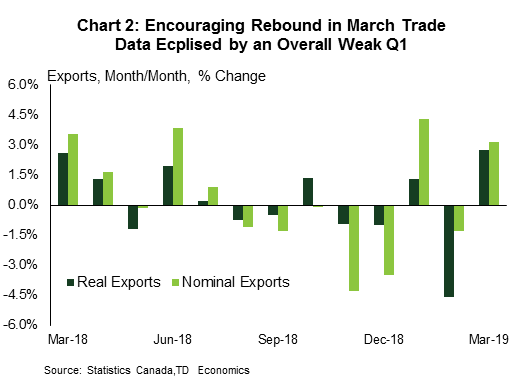 We expect another firm increase in sales in the control group (+0.5% m/m) to be the main driver behind a 0.3% rise in the headline measure for April. The increase in the latter would represent a mean-reversion in growth following the notable 1.6% jump in March that likely reflected, to a large extent, a normalization in tax refunds. We expect growth in sales in the key control group to be supported by solid real disposable income and a still humming labor market. In addition, we anticipate a 2.5% decline in auto sales to be a drag on headline growth, while food and gasoline station sales should continue to lend upside support to the headline measure. 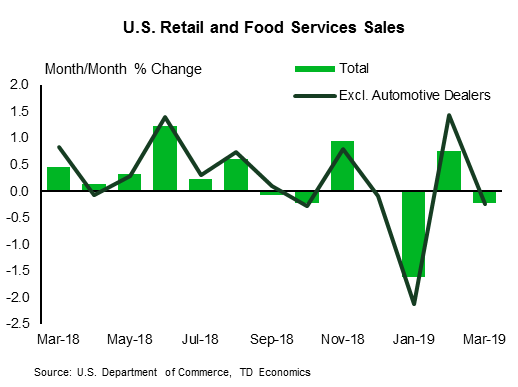 TD looks for headline CPI to firm to 2.0% y/y in April, leaving inflation at target for the first month since December. Our forecast is consistent with a 0.4% m/m increase, helped by a broad pickup in energy prices on the heels of the federal carbon backstop imposed on Ontario, Saskatchewan, Manitoba and New Brunswick on April 1st. This set the price for carbon emissions at $20/tonne and pushed gasoline prices higher by 4.4 cents per litre, contributing to another 10% m/m increase in the price at the pump following an 11.6% gain in March. The combination of carbon taxes alongside seasonal fluctuations and a pickup in oil prices has pushed gasoline prices above their Q4 highs to an average of $1.35 on April 29, just five cents shy of the record from 2014.

Looking past energy prices, we expect CAD depreciation to provide a tailwind to food products while ex. food and energy prices should see a soft 0.1% increase (0.2% seasonally adjusted); BoC measures of core inflation are likely to hold at 2.0% on average. Telephone services are a key upside risk after the Big 3 Telecoms raised internet prices throughout late March and early April while rent should also provide another source of strength following methodology changes that had seen rental CPI rise by 0.5% m/m in the last three months. 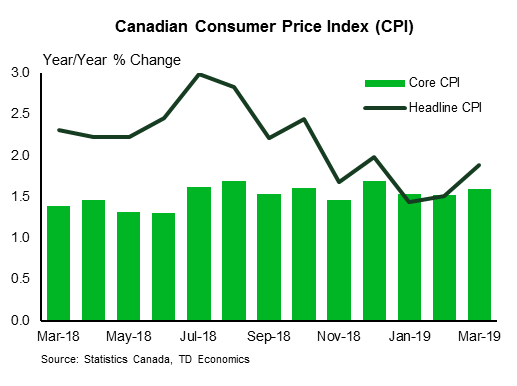 Manufacturing sales are forecast to rise by 1.6% in March, helped by a rebound in motor vehicle production and a significant increase in factory prices. Motor vehicle exports rose by 8% in March which fits with a rebound in preliminary production figures following a sharp pullback in February. Energy products will provide another source of strength for the nominal print on the heels of a 10% increase in gasoline prices. Excluding gasoline, industrial prices saw a more modest increase which will still provide support to the nominal series although the broad strength in real exports bodes well for manufacturing volumes. 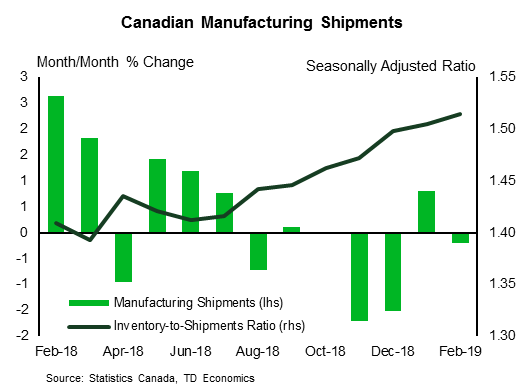