Wednesday May 15: Five things the markets are talking about

The ‘big’ dollar continues to tick higher but remains confined to another tight range, while sovereign bond yields trade atop of their two-month lows on the breakdown of Sino-U.S trade negotiations. Nevertheless, financial markets remain on edge as the White House announced it was preparing tariffs on the remaining +$300B of Chinese imports.

Elsewhere, in commodities, oil has pared some of its recent gains on reports that growth in U.S crude stocks is easing market concerns over tighter supplies worries after a drone attack in Saudi Arabia had highlighted the defencelessness of the country’s energy infrastructure.

Heightened intraday volatility is expected at least until Trump meets his counterpart, Xi Jinping, at next month’s G-20 summit.

On tap: Canadian CPI and U.S retails sales are due out at 08:30 am EDT. Down-under, Aussie unemployment numbers are due later this evening.

In Japan, the Nikkei ended higher overnight in another whippy session, breaking a seven-day losing streak, on market hopes that China would introduce fresh stimulus to support a slowing economy. The Nikkei share average ended +0.6% higher, while the broader Topix, which hit a four-month low on Tuesday, rallied +0.6%.

Down-under, Aussie shares rebounded overnight on expectations that RBA interest rates may be cut while a fall in the AUD boosted miners. Expectations of a rate cut increased after domestic wage growth stalled in Q1. The S&P/ASX 200 index rose +0.7% at the close of trade. The benchmark fell -0.9% on Tuesday. In S. Korea, the Kospi gained +0.6%. 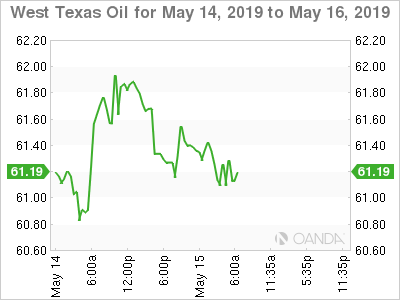 Oil prices are under pressure after U.S data showed a surprise rise in crude stockpiles and as Chinese industrial output grew less than expected in April. However, deeper pullbacks are well supported by ongoing tensions in the Middle East.

Data from the API yesterday showed that U.S crude stockpiles unexpectedly rose last week, while gasoline and distillate inventories increased. Crude inventories climbed by +8.6M barrels in the week to May 10 to +477.8M, compared with analyst expectations for a decrease of -800K barrels.

Oil prices have found support on deeper pullbacks after Saudi Arabia indicated yesterday that armed drones struck two of its oil pumping stations, two days after the sabotage of oil tankers near the UAE. The U.S remains on alert of “possibly imminent threats to U.S forces in Iraq” from Iran-backed forces.

Ahead of the U.S open, gold prices have steadied, retreated from their four-week high print Tuesday on investor optimism surrounding Sino-U.S trade. Spot gold is steady at +$1,296.49 an ounce, while U.S gold futures have edged +0.1% higher to +$1,297.20 an ounce. 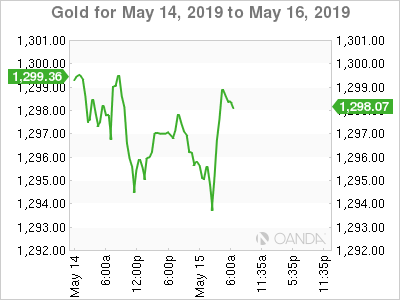 Germany’s 10-year Bund yield has fallen to its lowest level since October 2016 as a combination of weak Chinese data, Sino-U.S trade tensions, and anti-austerity rhetoric from the Italian government is supporting a safe-haven bid in bonds. Germany’s 10-year yield was last down -2.5 BPS to -0.098%. 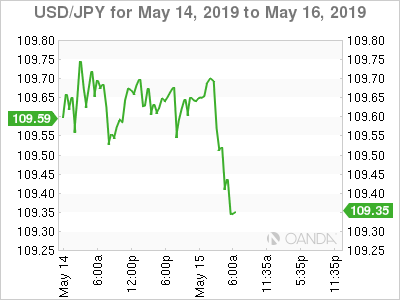 4. Dollar stuck in a contained vortex

Markets risk-off demise has eased a tad this morning with the ‘big’ dollar index trading a tad higher than the previous three-sessions.

EUR/USD (€1.1206) with an inline preliminary German GDP number (see below), the single unit continues to trade in its range of €1.12 to €1.126 while the Bund yield continues to be negative and trades atop of its three-year low yield.

GBP/USD (£1.2911) remains in a downward spiral as talks on Brexit continue at a slow pace. Parliament has set the date to vote on the Brexit bill during the first week of June.

USD/CAD (C$1.3473) with Canadian CPI due out today (08:30 am EDT), the CAD continues its sideways trading between C$1.34 and C$1.35 and this despite last Friday’s “unbelievable” Canadian employment numbers.

Turkey has raised to +0.1% from zero a tax on some foreign exchange sales, marking the country’s latest policy change to discourage a months-long trend of Turks selling the beleaguered TRY for more stable USD and EUR. The move comes after intervention by state banks that have spent billions of dollars in foreign markets to support the lira. TRY has weakened to $6.0670 outright, on market worries of possible U.S sanctions over a Turkish plan to buy a Russian S-400 missile defence system. 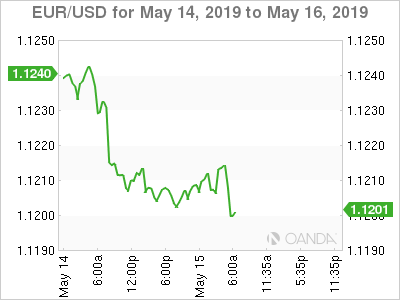 Data this morning showed that the German economy rebounded in Q1 after narrowly avoiding recession in Q4, 2018.

German business executives remain cautious, however, suggesting that any recovery could be short-lived. German exports faces renewed headwinds from Sino-U.S trade tensions and ongoing uncertainty around the U.K’s Brexit departure from the EU.

The latest escalation of the U.S-China trade battle “has created a fresh downturn in sentiment among German engineering companies.” 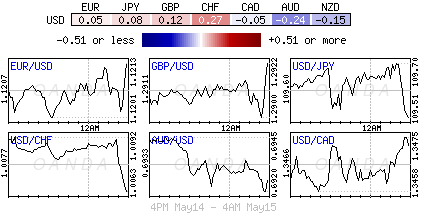