The Canadian Dollar rose 0.18 percent against the greenback on Wednesday. Canadian inflation data met the forecast at a 2 percent rise on a year over year basis. Gasoline prices increased 10.2 percent in the last 12 months as crude has appreciated with the OPEC+ deal limiting output and several geopolitical disruptions to supply offsetting the rise of US and Canadian production.

The biggest factor for the loonie did not come from an economic indicator. The news that the US is close to reaching a resolution on steel and aluminium tariffs boosted the currency. US Treasury Secretary Mnuchin said high level talks met to discuss trade. Given the uncertainty surrounding trade with the US, the news carries a positive connotation and eases concerns for the USMCA deal that could come under fire if the US decided to pursue a global trade war. 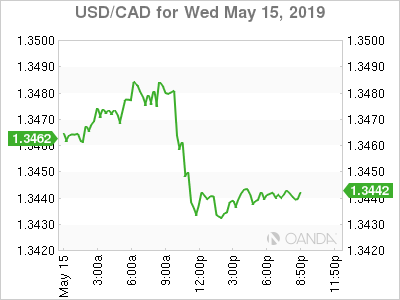 The US is also signalling a willingness to reassume talks with China as Mnuchin is looking forward to connecting again with Beijing.

Oil prices rose despite higher US weekly inventories as tension in the Middle East forced the US to pull out its diplomats out of Iraq. The OPEC+ deal brought about stability to crude prices, but as geopolitics have caused supply disruptions prices have risen as sanctions, sabotage and military action threaten the steady flow of crude in the region.

The US dollar is higher against most majors on Wednesday after a flurry of trade comments injected optimism into the market. A delay of US auto tariffs boosted global stock markets and offset some of the softer US data released on Wednesday. Retail sales and industrial production remain weak in an economic calendar that wrapped up early this week. The next major release in the US will be next week on Wednesday when the U.S. Federal Reserve published its notes from its April/May FOMC meeting. 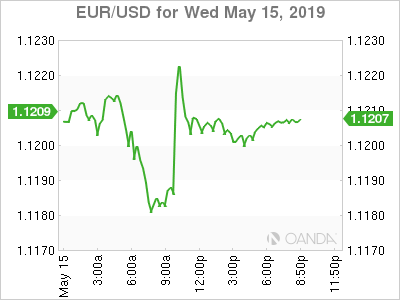 Global trade has been the biggest story in 2019 as much as the Fed was in 2018. The central bank hiked rates 4 times in 2019, but as the US economy loses momentum even the President has asked for a rate cut. The market is now pricing in that scenario as a real possibility this year and it could become a reality if fundamentals don’t improve.

The US decided it was better to delay the auto tariffs to avoid opening more fronts in order to concentrate on the China deal. US Treasury Secretary Mnuchin said that a deal with Canada and Mexico is close on steel and aluminium which would give more bandwidth on trade to focus on dealing with the second largest economy.

The Energy Information Administration (EIA) reported a gain of 5.4 million barrels but rising tensions in the Middle East forced US diplomats to withdraw from Iraq putting more emphasis on a showdown between America and Iran. 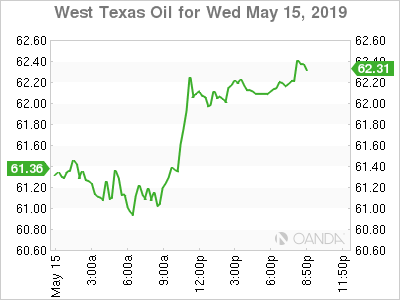 The attacks on Saudi tankers and Iran ending its nuclear commitments have escalated turmoil in the region with the US ready to apply pressure in Tehran and evacuating its embassy in Iraq due to security concerns.

Supply disruptions have kept crude higher, even as the US has ramped up production. The OPEC+ agreement to limit output is the biggest factor, but geopolitical disruptions like the US sanctions against Iran and Venezuela and the armed conflict in Libya are added to the situation in Saudi Arabia. 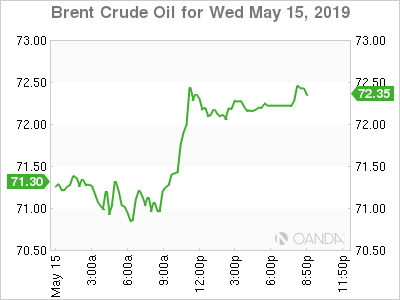 Iran has said that its goal it’s not military confrontation, but just a response to US escalating its efforts. Supply disruptions have been the major factor boosting oil prices. Geopolitical

Saudi Arabia is seen as the main producer that could cover the gap in supply left by Iranian crude. US President Donald Trump has tweeted about the OPEC’s role in keeping prices lower if they increase their output.

The deal between OPEC and other major producers will reach its end in June, but it could be extended if participants deem the market has not reach price stability which was their main goal. Russia remains a big question mark as it has sacrificed its revenue to be part of the deal and could be ready to take advantage of higher prices ahead of even higher levels of US production causing another drop.

US production has increased dramatically to the point that the one-time net importer is now an exporter of energy products. Shale technology has tipped the scales of global production and threatens to reduce the influence that the OPEC has on the market. The decision from OPEC members to fight fire with fire and flood the market to drive shale operations into bankruptcy backfired and forced the group to reach out to non-OPEC members in order to have a significant impact on the market by collectively reducing their output.

Gold was flat on Wednesday as positive US comments on trade brought back risk appetite. The Trump administration delayed auto tariffs by six months and is said to be close to resolving its steel and aluminum tariffs with Canada and Mexico. Stock markets rose on the news, despite softer economic indicators out of the US. The yellow metal’s fall was broken by the higher tensions in the Middle East making gold a good alternative for investors looking for a safe haven. 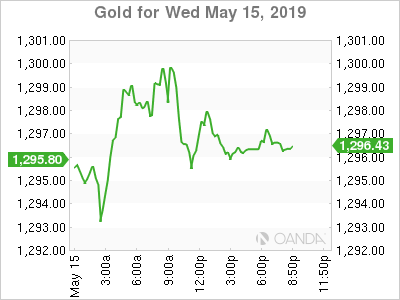 Trade concerns are easing as the White House is looking forward to more talks with China and tariff delays for global auto lifted pressure on European stocks. Volatility will remain high as uncertainty is plentiful with so many geopolitical risks up in the air making gold a viable asset for diversification.

Global equities were higher after US President Donald Trump announced a delay to the planned auto tariffs. The six-month term was a positive for auto stocks that gained after the news. The US entered a combative stance on trade when Trump entered the White House, but as a trade deal with China broke off in the last mile American rhetoric had become more aggressive and markets feared a full-on trade war. 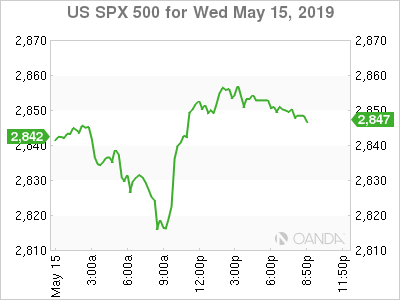 US data came in below expectations with retail sales and industrial production disappointing and building the case for a Fed rate cut this year. Economic indicators continue to be mixed and the market is pricing in lower growth, but trade war concerns are driving prices. Until a US-China trade deal is signed, which could come before or at the G20 meeting in Japan, fundamentals will still be in the backseat to geopolitics.