China appears in no rush to respond to the US latest efforts on ramping up the trade war.  The latest move from the US is the consideration of blacklisting up to five Chinese surveillance firms.  This action would require US companies seek government approval to supply components to China’s Hikvision, Zhejiang Dahua Tech and a few others.  In addition to dealing with the effects of the Huawei ban, Chinese markets have been fairly resilient due to stimulus from the PBOC.

US stocks appear stuck in limbo as China’s response could take aim at crippling US technology firms and that might be what is needed to motivate both sides to resume talks.  This round of talks needs to get uglier before progress can be made, and right now, only the US is throwing punches.

The base still remains for a deal to be done, possibly by mid-summer, but nothing is certain as China’s rhetoric seems content to dragging this out longer and possibly closer to US Presidential election.

Prime Minister May’s latest withdrawal agreement bill (WAB) was met with staunch refusal from conservative MPs, Tories and Labour, implying her deal is “dead on arrival”.  She was hoping her fourth attempt for a deal would fair better, but she is seeing opposition now from key Tories that supported her earlier bill.  The writing is on the wall for PM May and the calls for her resignation should grow.  ERG members will likely provide a round of interventions aiming at bringing on a confidence vote on the PM.  This will be difficult for Sir Graham Brady to support this since he just gave the PM until June before she will resign regardless of the outcome of her bill.

The British pound dropped to 6-month lows following PM May’s latest efforts which likely cement the end of her tenure.  Cable did catch a small short-lived bid after inflation in Britain climbed in April back above the BOE’s target rate as energy prices and airfares rose. 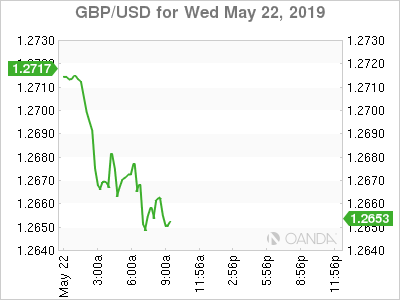 The minutes from the April/May FOMC meeting should provide additional detail to the transitory pressures that are causing weakness in core inflation.  Fed Chair Powell’s recent comments strong job creation and rising wages since the rate decision have been fairly hawkish and markets will look to see if the Committee takes aim at squashing rate cut bets.

The Fed may provide extra clarity on their balance sheet policy and on the deviation to more a broad target for inflation.  The patient script is likely to be the focal point of the minutes. 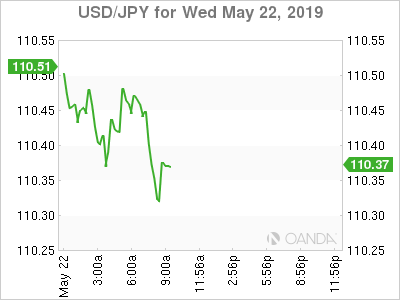 The home-improvement retailer’s turnaround is not going as planned.  Lowe’s Cos delivered an earnigns miss and slashed their guidance.  Cost pressures are growing, but they seemed fairly optimistic on the US consumer, noting that they are healthy.

Target delivered a good enough quarter to see shares pop in pre-market trade.  Comparable climbed 4.8%, a strong beat of the 4.3% analysts were targeting.  Target’s performance breaks a recent string of poor results from retailers, such as Nordstrom, JC Penney and Kohls Corp.

Tariff concerns are weighing on the US consumer and best of breed is likely to excel is this uncertain environment.  Big retailers might have the advantage in the short-term. 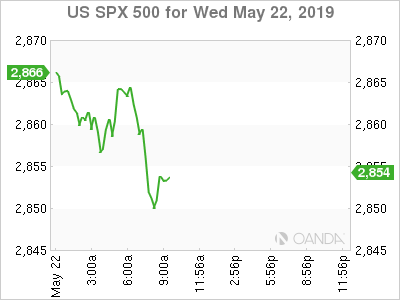 Oil prices declined 1% as global growth concerns linger and following a big build from the API report.  The weekly crude inventories rose by 2.4 million barrels last week, higher than the analyst forecast of a build of 1.7 million barrels.

Crude prices are seeing the effects of the OPEC and allies production cuts fade away and growth concerns remain high on trader’s radar as China could deliver their retaliatory response at any moment. The DOE crude inventory report later this morning is eyeing a draw of 1.3 million barrels.  A surprise build could see WTI attempt fall another percentage point. 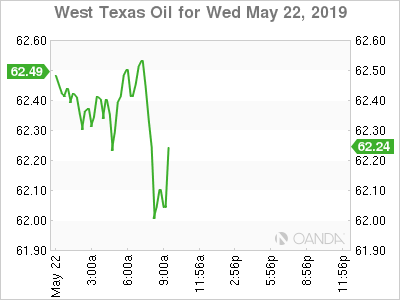 Gold is bouncing off two-week lows as trade jitters keeps demand for safe-havens in play.  Potentially forming a triple-bottom pattern, the yellow metal is barely holding onto the $1,270 level.  A strong dollar has kept gold ground and deflationary conditions have put a dent in most rallies.  Until we see a significant move lower in the dollar, gold prices may struggle to rally even during peak flight-to-safety moments throughout the conclusion of the US/China trade war. 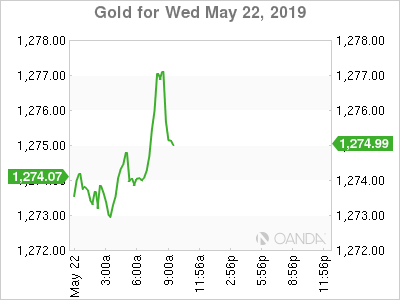