The Reserve Bank of New Zealand (RBNZ) will announce its rate decision early on Wednesday, at 02:00 GMT. No action is expected, so markets will be looking for signals that a rate cut is on the table at the August meeting. While the kiwi could tumble in case of a dovish statement, any losses may be short-lived if the American and Chinese presidents strike a conciliatory tone on trade when they meet on Friday.

The RBNZ cut rates the last time it met, highlighting that more stimulus was needed in the face of a slowing domestic economy and mounting global trade risks. Incoming data since that gathering have been mixed. While GDP growth clocked in at 0.6% q/q in Q1, higher than the RBNZ’s own projection of 0.4%, the details reveal that much of the strength was owed to temporary factors that may fade soon.

Separately, business confidence remains low, holding back investment and therefore posing downside risks for future growth. Likewise, dairy prices have fallen in the past three auctions, reversing some of the strength seen earlier this year, which is worrisome for an economy that’s reliant on milk-related exports. 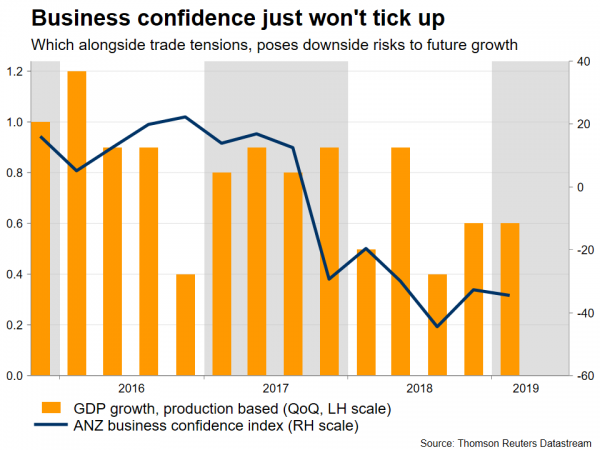 All the above suggest the RBNZ is probably not done cutting rates, though considering the cut at the previous gathering, markets only assign a 28% probability for another move this time. That said, when one looks at the next meeting in August, the implied likelihood for a rate reduction jumps to 85%, so investors don’t really expect the RBNZ to stay sidelined for long either.

In terms of the market reaction, the risks seem tilted towards a weaker kiwi on the decision. The Bank is likely to tweak its language in a more cautious direction, preparing markets for a potential August action. More importantly, since other major central banks have adopted an easing bias, the RBNZ will be conscious that unless it signals more cuts too, the kiwi could soar – an outcome it likely wants to avoid. A stronger currency pushes down on import prices, making it harder for inflation to rise, and also makes a nation’s exports less competitive abroad.

There’s also a slim chance the RBNZ decides to surprise and cut this week, which further argues for a negative reaction.

Down, but not out

Looking beyond this meeting though, the kiwi’s direction will depend mainly on how trade tensions between the US and China evolve – especially as the Trump-Xi meeting at the G20 summit commencing on Friday. Trade is probably the most important variable for the currency, as potential signals that trade talks will restart in a frank manner could paint a brighter picture for New Zealand’s export-heavy economy, and also make the RBNZ more hesitant to cut rates deeper.

In this sense, there is a clear upside risk for the kiwi this week after the RBNZ meets. The leaders of both China and the US might try to portray a positive picture, even if they remain far apart on crucial issues, for fear of hurting economic and business sentiment in their respective home economies.

Taking a technical look at kiwi/dollar, support to declines may be found near the May lows at 0.6480.

On the flipside, advances in the pair could encounter immediate resistance at 0.6680, an area marked by the June 7 top.

NZD/USD Analysis: Could Edge Up