Inflation appears to have stabilized and this will put a wrench in some Fed rate cut bet forecasts.  With wage pressure not delivering a powerful effect on inflation, we should still see day two of Fed Chair Powell’s testimony keep the rate cut expectations in place for the July 30-31st meeting.  Moderate inflation, growing global uncertainties, and a strong labor market will support the argument for only a 25-basis point rate cut at the end of the month.  Calls for a 50-basis rate cut will require the July 26th advance reading of second quarter GDP to fall well below the 2.0% analysts’ expectations.

Jobless claims also had its best reading in 12-weeks, surprising many analysts who thought we would see a strong rise as automakers close up assembly plants for annual retooling.

Treasury yields popped on the better than expected core consumer inflation and jobless claims data, while the dollar was unable to muster up a meaningful rebound.  Markets appear convinced Powell will not deliver any surprises today.

The euro held onto its gains against the dollar as ECB minutes for the June 5-6th meeting highlighted policy makers are ready to deliver more stimulus as the debate begins on how to use adjust their current tools.  Some called for TLTRO III to be more aggressive in supporting the economy, reminding markets that all tools will be used if we see a greater downturn in the eurozone economy.  ECB rate cuts expectations pared slightly following the policy minutes release.

The euro could see further gains here as market participants see the Fed possibly embarking on a much more aggressive rate cut trajectory than the ECB.  Over the next 12 months, markets could see the Fed delivering 100 basis points in rate cuts while the ECB may only deliver half of that total. The common currency is also benefiting from slightly higher revisions with German EU-harmonized inflation readings. 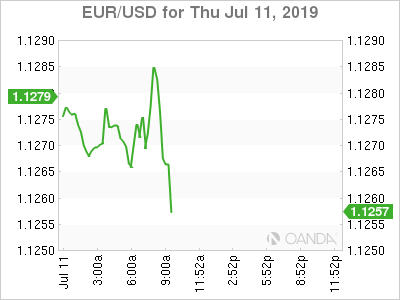 Crude prices are higher after UK Navy was needed to ensure the safe passage of a BP tanker through the Persian Gulf. What makes this escalation so important is that is the first time that a Western warship almost engaged in a military conflict with Iran.  The incident does not bode well for nuclear talks between the Iran and the Europe and likely provides more ammunition for President Trump to deliver more sanctions on Iran and seek UK support in abandoning the 2015 nuclear deal.

West Texas Intermediate crude’s break of the $60 a barrel level was also supported on reduced production expectations from Gulf of Mexico operators as many platforms are being shutdown ahead of a tropical storm that could become a hurricane.  Energy traders now have to price reduction output as operators have shut down 32% of the gulf’s oil output and 18% of its natural gas production.

Oil could see further bullish momentum on the larger than expected declines with inventory data, escalation tensions in the Persian Gulf and reduce production from the Gulf of Mexico as hurricane season picks up. 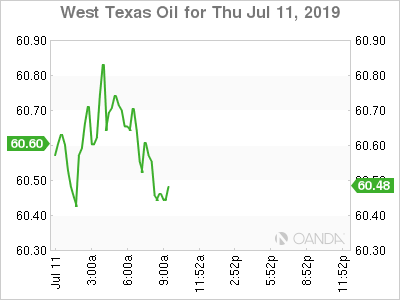 Gold prices appear to be in overbought territory and we could see some consolidation here as markets have already heavily priced in the beginning of the Fed’s easing cycle and the growing expectations the other major central banks will be delivering additional stimulus.  The better than expected US labor and inflation data put a big dent in today’s rally.  A pullback will be welcomed by bullion bulls, with $1,380 an ounce level providing major support. 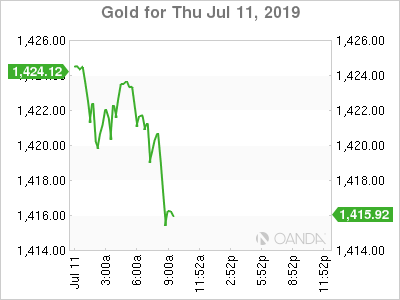 Bitcoin is shouldering Fed Chair Jerome Powell’s serious concerns about Facebook’s planned digital currency Libra.  Libra was expected to be the springboard for other cryptocurrencies to emerge but it seems we will see a tougher road ahead for digital coins.  Powell’s concern on Libra’s financial stability, privacy, money laundering, and consumer protection have been plaguing Bitcoin for years. 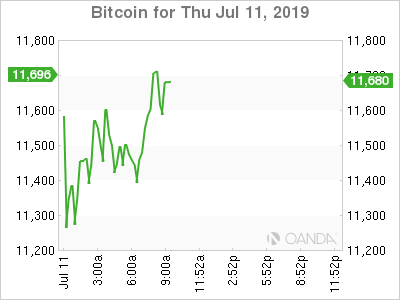 BTCUSD Back Under Pressure