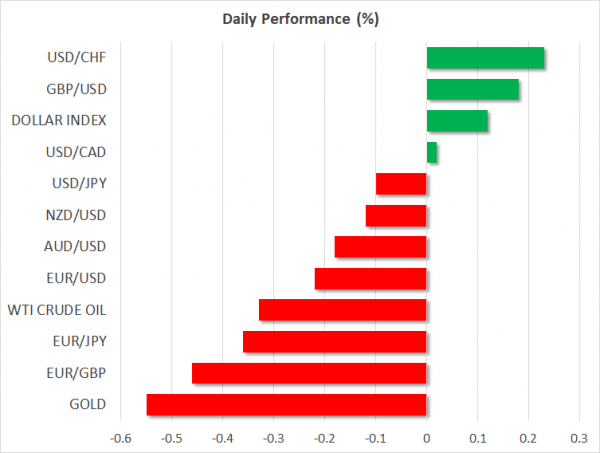 The British pound remains the ‘sick man’ of the FX market, plummeting to a new three year low against the euro on Friday, after the latest GDP figures showed that the economy contracted in Q2 for the first time since 2012. Brexit worries have clearly started to bite as business investment shrunk substantially – a sign that firms are putting their expansion plans on ice until the political climate improves.

The disappointing numbers saw speculation for a Bank of England rate cut this year heighten, with the implied probability for such an action jumping to ~70%. A letter from Boris Johnson to all civil servants outlining that the UK will leave the EU on October 31 “whatever the circumstances” probably amplified the pound’s losses by making it crystal clear that the government’s top priority is to prepare for a no-deal outcome.

Overall, the outlook for sterling remains dark, despite the already-massive losses. Boris apparently isn’t bluffing about a no-deal exit, nor does he appear to have much appetite for real negotiations. Even if Parliament brings down the government via a no-confidence vote, he could simply set the date for the new elections in November, after the UK officially crashes out of the EU. For now, perhaps the only thing that can halt further sterling losses is investors hedging their prior short positions.

Global risk appetite took another hit on Friday, following another round of trade posturing by the US President, who said he isn’t ready to make a deal with China. He even cast doubt on whether the planned negotiations in September will actually take place. While this is Trump’s typical playbook – exert maximum pressure to extract concessions – traders were still rattled, flocking into the safety of the Japanese yen as they cut some exposure to stocks.

The trade picture remains muddy and more escalation in September looks imminent, as Trump may even use this conflict to fire up his electoral base and score some political points before hitting the campaign trail ahead of the 2020 elections. Meanwhile, China doesn’t want to be bullied so it probably won’t cave to pressure, especially given Trump’s confrontational stance on geopolitical issues too, like the South China Sea and Taiwan.

Indeed, this conflict increasingly resembles a prisoner’s dilemma situation, where neither side can really back down without losing face. In the markets, an ever-darkening trade outlook would argue for more frequent waves of risk aversion, especially if the ongoing uncertainty strengthens recession fears. That could help the Japanese currency, which is already the best performer of 2019, to expand its gains.

Quiet start to a data-heavy week

There’s nothing major on the economic calendar for today, so markets could take their cue primarily from any Brexit or trade developments.

Liquidity conditions may be thinner than usual, given how many investors are likely away on holiday, so any piece of news could have a disproportionately large market impact in this environment.