The world’s second-largest economy reports retail sales, industrial production, and fixed asset investment data early on Wednesday. Forecasts point to a slowdown in most figures, which if met, could signal that the trade war has truly started to inflict pain – despite substantial stimulus. Alongside the yuan, the China-sensitive aussie will also keep an eye on these prints, though the bigger driver for both will probably be what happens next in the trade saga.

China’s economy probably lost steam at the beginning of Q3, as the latest trade threats from Washington may have weighed further on business sentiment, particularly in the manufacturing sector. Indeed, the most worrisome part for Chinese firms may not be the tariffs themselves, but rather the uncertainty coming from the repeated escalations, and the growing signs that this ordeal won’t be resolved anytime soon.

The nation’s upcoming data for July are expected to confirm much of this story, with industrial production and retail sales both expected to have slowed significantly on a yearly basis. Meanwhile, even though fixed asset investment is expected to have risen at the same pace as previously, that may be worrisome in itself, considering that the authorities have been trying hard to stimulate investment. 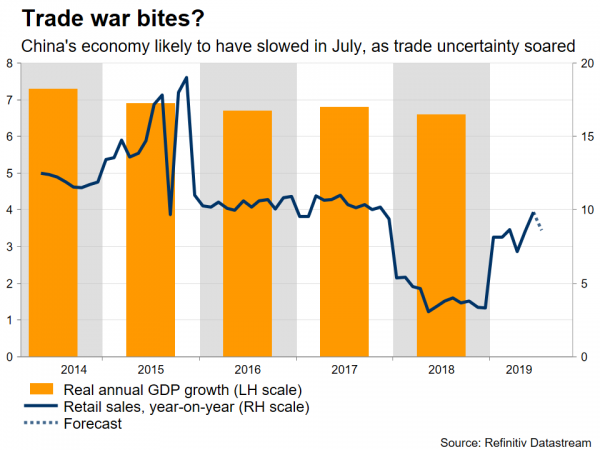 In the market, these data could affect both the yuan and the aussie, given Australia’s close trading ties with China. In case of any major surprises, these may even impact broader risk sentiment, and therefore risky assets like stocks or safe havens such as the Japanese yen.

The bigger driver for most of these currencies though, will be how the trade war evolves. Indeed, both the aussie and the yuan are trading near decade-low levels, as fears of new US tariffs in September continue to cast a long shadow. On the opposite side of the risk spectrum, the yen is the best performing currency of 2019.

On that front, Trump looks increasingly likely to escalate matters again next month, as he may use this conflict to energize his electoral base ahead of next year’s elections – by playing the ‘tough on China’ role. Meanwhile, Beijing doesn’t want to be bullied, nor does it want to lose face domestically or internationally, so it’s unlikely to cave under Washington’s pressure. In other words, the trade war is probably here to stay, implying that the outlook for the aussie remains dark overall.

Taking a technical look at aussie/dollar, further declines could meet immediate support near 0.6745, with a downside break opening the door for the 10-year low of 0.6675. Even lower, attention would turn to the round mark of 0.6600.

On the flipside, a recovery in the pair may encounter initial resistance around 0.6820, where a bullish break could see buyers challenge the 0.6905 zone, marked by the inside swing low on July 10.