China Steals Fed’s Thunder With New Round of Tariffs

The US dollar is lower across the board against major pairs at the end of a volatile Friday. The speech by Fed chair Jerome Powell at Jackson Hole was the main event in the radar before China announced it was escalating its trade war with the US. The dollar was on the back foot, even though the Fed remains non-committal to a monetary policy easing cycle. President Trump blasted Powell for not cutting rates and launched a new trade offensive against China.

The trade war between the two largest economies has been the main factor putting pressure on global economic growth. After several cease fires and rounds of talks the two sides remain far apart and China has surprised most, in particularly the White House, by standing their ground at the negotiating table.

The USD/JPY fell more than 1% percent on Friday as the yen soared after uncertainty was triggered not only by the China announcement, but by the US response on more tariffs coming. The Fed went from the main event, to a secondary act, with safe havens such as the Japanese yen, Swiss franc and gold. 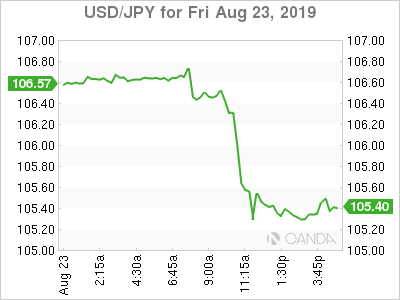 The dollar was sold off against major pairs with safe havens rising not the face of a renewed round of tariffs in the prolonged US-China trade war. The JPY looks set to break under 105 ahead of the end of the week. Next week US-China headlines and comments will drive markets even as the G7 meet in France. The JPY will continue to get bid as flows will settle on the safety of the Japanese currency.

China targeted oil imports from the US and WTI fell more than 2 percent. The trade war between US and China was already the biggest factor putting pressure on crude prices as it led to the global growth downgrades and drove energy demand lower, but with tariffs directly on US energy exports US crude went into a free fall. 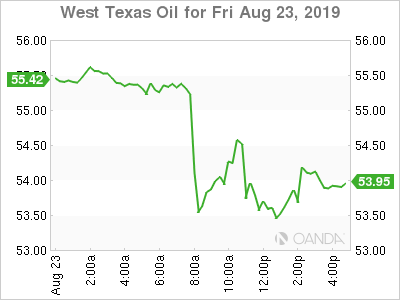 Brent and WTI will diverge on a weekly basis as the European benchmark will finish 1.16 percent higher, while WTI will almost mirror with a. 1.24 but on the loss column. The US boom shale has allowed the nation to be a net exporter and with this blow China hit a very strategic target. Beijing will now shift some of its energy demand to other providers with the ball on the White House on how to respond.

The new round of tariffs announced by China this morning is giving gold its time to shine. The metal has been a favoured safe haven by investors as geopolitical risk events are on the rise. China took center stage an in a vintage Kanye West move interrupted the proceedings when everyone was waiting for Fed Chair Powell, to announce the 5 to 10 percent tariffs in two rounds matching the dates imposed by the White House. 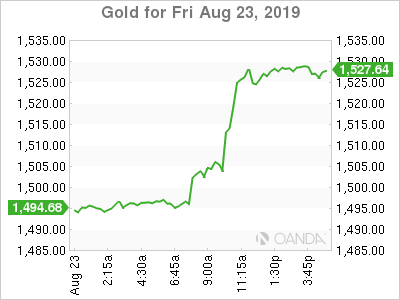 Gold is trading at $1,528 and will continue to bid as more developments are known about the US retaliation to the latest round of Chinese tariffs. Jerome Powell met most of the expectation of the Fed’s neutral stance, but the market and Trump in particular were disappointed and singled him out adding to the appeal of the yellow metal as a safe haven.

US equities were prepared to rise as the Fed would be signalling further rate cuts, but China’s latest round of tariffs took the market by surprise. Beijing is ready to apply 5 to 10 percent on $75 billion of US imports as a direct response to the tariffs announced by the US that become effective on September 1. 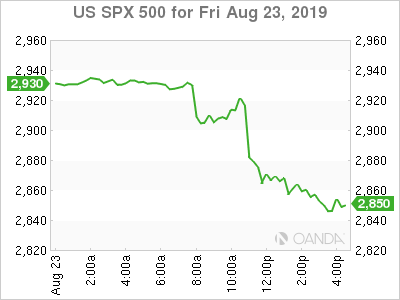 The China opening proved to be a tough act to follow for Jerome Powell. Trump tweeted in anticipation that “Now the Fed can show their stuff!” but he later criticized the central bank for their lack of action. The speech by the Fed chief was unsurprisingly neutral and was already in final form before the Chinese tariffs disrupted the trading session.

Trump went on the offensive and threatened escalation which hit equities directly and pushed them into the red. US markets closed more than 2 percent down for the day and a weekly loss.