It will be relatively quiet on the data front in the coming week with just a handful of top-tier releases, but Mario Draghi’s last ever policy meeting at the helm of the European Central Bank should make for an interesting week. The ECB meeting will not be the only policy gathering in Europe as the Swedish and Norwegian central banks will also be setting monetary policy. Brexit, meanwhile, will remain centre stage as a rejected deal could greet traders on Monday. In terms of economic indicators, the flash PMI readings by IHS Markit will be the main highlight.

The pound has shot higher on the back of the United Kingdom and the European Union speedily reaching a revised deal on the terms of Britain’s departure from the bloc with just two weeks left before the October 31 deadline. However, history appears to be repeating itself as the DUP – the small Northern Irish party that prop up Boris Johnson’s minority government – have confirmed they will not support the deal. 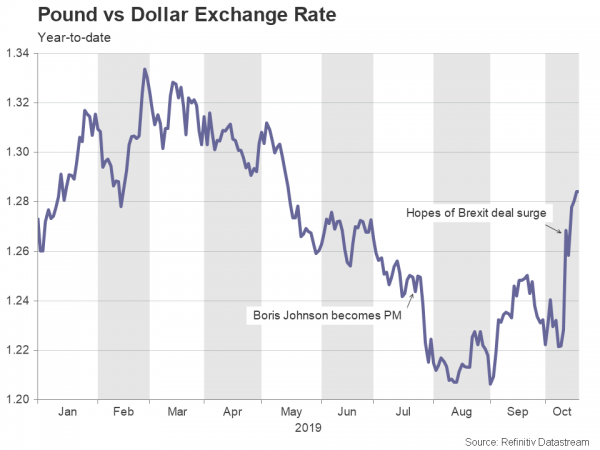 This significantly reduces the chances of the deal getting through Parliament, even if the ERG wing of the Conservative party, which failed to unite behind Theresa May’s deal, decide to back Johnson’s version. The main distinction in the renegotiated deal is the removal of the contentious Irish backstop, which has been replaced by a dual customs arrangement for Northern Ireland.

Another danger for Johnson is the possibility that the Labour party might decide to whip Labour MPs to vote in favour of an amendment that would put the decision to the public in a confirmatory vote. Such a move would it make extremely difficult for the government to win over crucial votes from rebel Labour MPs.

The government has called an emergency sitting of Parliament on Saturday to allow MPs to discuss and vote on the agreement. Should the deal be rejected, the pound faces a long sharp pullback when markets open on Monday. The EU has indicated it does not want another extension, though many see this as a tactic to pressure British lawmakers to support the deal and there’s little doubt another extension would not be granted. The pound’s losses are likely to be contained if Parliament votes down Boris’ deal and there’s going to be a Brexit delay. It may even extend its rally as the most probable alternatives – an election that leads to a majority for Johnson or a second referendum – are sterling positive.

The European Central Bank will announce its latest policy decision on Thursday, but the flash October PMIs will also come under the spotlight on the same day. The preliminary readings for October are forecast to show a small improvement in euro area economic activity during the month. The manufacturing and services PMIs are expected to print at 46.0 and 52.0, respectively, while the composite PMI is forecast to rise from 50.1 to 50.4. Also important will be Germany’s Ifo business climate gauge on Friday. 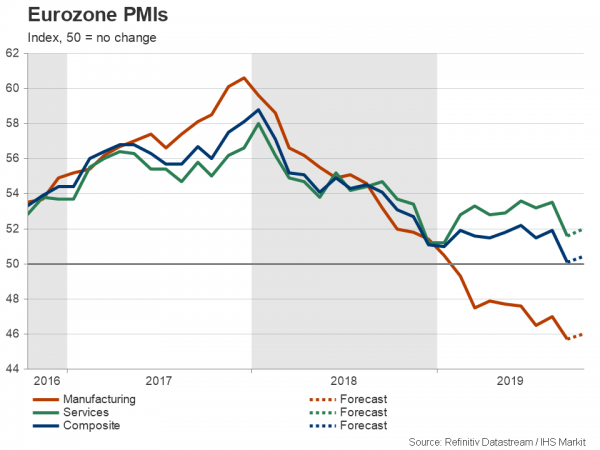 An uptick in the business surveys could spur the euro to stretch the past week’s gains, having broken above the $1.11 level for the first time in a month. But the single currency’s bull charge could lose steam if the PMIs disappoint or if ECB President Draghi signals the Bank is open to more easing. The ECB is widely expected to keep policy unchanged and Draghi’s press conference is more likely to focus on his tenure at the central bank than on future policy. Draghi would also not want to be seen further cornering his successor, Christine Lagarde, having upset the hawks at the September meeting by pushing ahead with aggressive easing, which involved an open-ended asset purchase programme.

Riksbank and Norges Bank meet too

The Swedish krona and Norwegian krone have been moving in opposite directions over the past week as traders bet that interest rates will rise further in Sweden but will stay on hold in Norway in the coming months. The odds of a rate hike by the Riksbank got a major boost after last week’s Swedish inflation data for September came in strongly above expectations. In contrast, a weakening outlook for oil demand has been weighing on the Norwegian krone, which has been recording fresh all-time lows versus the euro in the last few days. 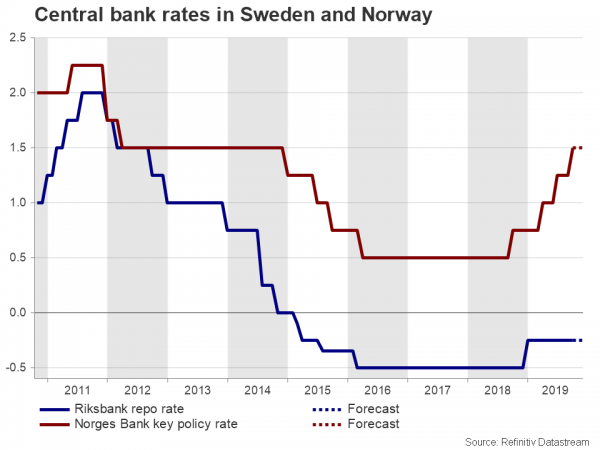 The two central banks will announce their latest policy decisions on Thursday together with the ECB, potentially making for a volatile few hours for the crown crosses if there any surprises in the banks’ statements. The Riksbank and Norges Bank are both expected to keep interest rates unchanged.

With just less than two weeks to go before the Bank of Japan meets for its October policy meeting, trade data due on Monday will be one of the final pieces of the jigsaw in determining whether policymakers decide to ease policy. Japanese exports have been on a year-on-year decline since last December and are forecast to have tumbled by a further 4% in September. The flash manufacturing PMI due on Thursday is not anticipated to be positive either with the sector projected to have contracted again in October. 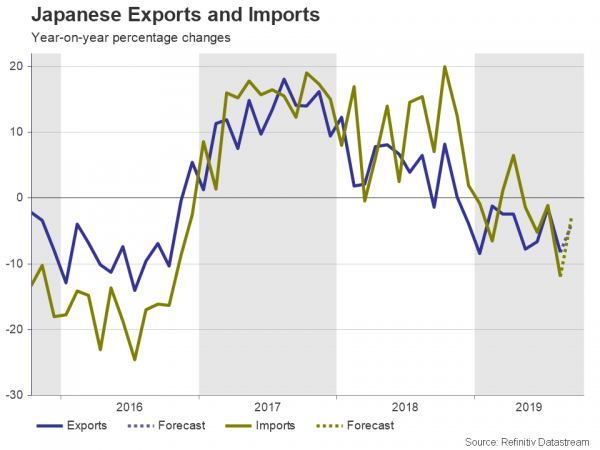 Worse-than-expected numbers could weigh on the yen if they lift the odds of a BoJ rate cut. The yen has been on the retreat in the past couple of weeks as trade tensions have subsided somewhat, and the risk of a no-deal Brexit has receded.

Few drivers for the US dollar

US data will take a backseat next week, meaning the dollar will more likely be led by factors affecting the euro and the pound. Housing figures and durable goods orders will be the main focus after some disappointing data in the past week raised fresh worries about the strength of the US economy. Existing home sales for September are due on Tuesday, followed by the August monthly home price index on Wednesday and September new home sales on Thursday. 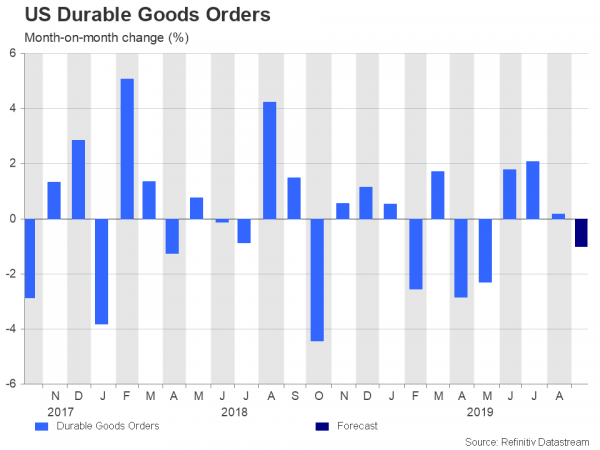 The dollar could come under heavier selling pressure than what it’s faced so far if next week’s numbers continue to fall short of estimates following a series of weak releases in recent days such as the retail sales and industrial output reports.

Canada will go the polls on October 21 and the incumbent Liberals led by Justin Trudeau are currently marginally behind the Conservatives in the polls. However, the Liberals are projected to win slightly more seats, putting them in a strong enough position to form a minority government. But the Canadian dollar, which surged to 2½-month highs this week, is likely to react negatively whoever leads a minority government as an alliance with smaller parties would make it more difficult for either the Conservatives or the Liberals to press ahead with the controversial Trans Mountain pipeline expansion or other big energy projects. For the markets, the most positive outcome would be a Conservative majority government as the party is seen to be the most pro-growth.

A day after the elections, retail sales numbers for August should provide local traders a welcome distraction away from politics.

Japanese Yen Reverses Its Gains In The Asian Session