Preliminary GDP q/q figures get released at 8.30pm AEDT. We think there’ll be some close interest in this print given last week’s BoE rate decision where BoE held rates delivering on expectations but also came out more dovish than expected. Given Carney cited near-term growth risks in his press conference, a weak GDP – forecasted at 0.4% – could help GBPUSD edge towards Friday’s lows of 1.277. If industrial and manufacturing output, also set to be released at the same time, falter, then we expect an even larger downside move in GBPUSD maintaining November’s downward trend.

Overall we expect BoE market pricing to remain sensitive to incoming GBP data though the week with employment figures out on Tuesday, CPI on Wednesday and broader Brexit and election developments ongoing.

In early Europe at 6pm AEDT markets catch CPI numbers out from Norway. We think it makes for an interesting discussion point given the decent run-up in USDNOK over the prior five months as the Norges Bank has moderated its hiking bias somewhat. We focus on the core inflation y/y print which is forecast to come in at 2.3%, slightly up on prior month’s 2.2%. A beat could see Norges hiking bias strengthen and therefore help USDNOK test 9.090 support in line with its 50d-ma.

US and Norwegian 10y yield differentials have also tightened over the past few weeks without a commensurate sell-off in USDNOK. And so, at current spread levels, we think there’s definitely room for USDNOK to trade under 9.1. In the other direction, a miss weakens the Norges hiking bias. This makes USDNOK vulnerable to a move higher above 9.3 between now and the next Norges meeting. 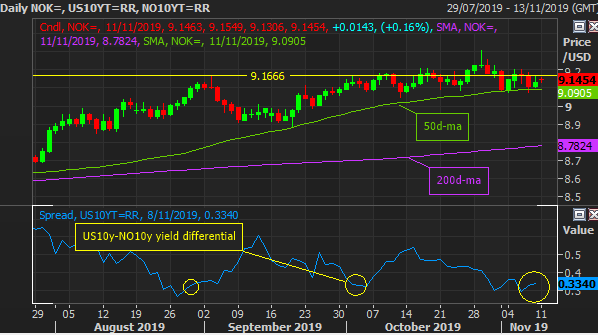 Veterans Day in the US means a bank holiday for US traders. Therefore, expect lighter liquidity through London/NY cross in G10 FX majors.