The Aussie weakened against the USD over today’s Asian session, as the minutes of RBA’s last meeting, were deemed as quite dovish. In the minutes, the board seems prepared to ease policy further and agreed that a “case could be made” for a rate cut at the November meeting, yet decided that rates should be held steady. The board also recognized the “negative effects” of lower rates on savers and confidence. On the flip side, the bank saw the case to wait and assess the impact of “substantial” stimulus already provided, while there seems also to be an agreement that lower rates for an extended period would be required. We see the minutes as clearly tilted to the dovish side, yet the possibility of an imminent rate cut, still seems currently as a remote scenario, albeit the recent weak employment data do not provide much confidence. The Aussie could weaken further and should there be further negative headlines about the US-Sino relationships, we could see the bearish effect for the Aussie strengthening. AUD/USD dropped during the Asian session, breaking the 0.6800 (R1) support line, now turned to resistance. Despite the pair’s drop, the pair seems to correct in the past 1 hour, hence is direction for the day is still uncertain. Should the pair maintain its bearish tendencies, we could see it breaking the 0.6775 (S1) support line and aim for the 0.6750 (S2) support level. Should the bulls take over, we could see the pair breaking the 0.6800 (R1) resistance line and aim for the 0.6822 (R2) resistance level.

…while the greenback seems to weaken on trade doubts…

The USD weakened against a number of its counterparts yesterday as doubts about a possible partial deal with China rose once again. The new source of concerns seemed to be rooted in a CNBC report yesterday, which stated that according to government sources China is pessimistic about the prospects of a deal with the US. The report also stated that the Chinese side was troubled by Trump’s comments that there was no agreement on phasing out tariffs. On the flip side, one must note that Huawei was granted yesterday a new 90 day license extension by the US administration. The news albeit not of huge impact, still count as positive, as the extension would allow Huawei to continue its purchases from US companies. Also, Trump’s silence on the proposed bill by Congress about the situation in Hong Kong, may imply that the US President does not want to complicate the possibility of reaching a partial deal with China about trade. Should there be more negative headlines about the US-Sino relationships, we could see the USD weakening. USD/JPY rose to test the 109.00 (R1) resistance line yesterday, yet in the American session dropped lower, as the JPY strengthened, and the USD weakened on the fundamental news. The pair seems to maintain a sideways motion since Wednesday, in the corridor formed by the 109.00 (R1) resistance line and the 108.35 (S1) support line. Should the pair come under the selling interest of the market, we could see it breaking the lower boundary of the 108.35 (S1) support line and aim for the 107.75 (S2) support level. Should the pair’s long positions be favored by the market on the other hand, we could see USD/JPY breaking the 109.00 (R1) resistance line and aim for the 109.70 (R2) resistance level.

During today’s European session, we get Eurozone’s current account balance for September and UK’s CBI orders trends orders for November. In the American session, we get from the US the Building Permits for October and the number of House starts also for October. From Canada we get manufacturing sales growth rate for September. During tomorrow’s Asian session we get Japan’s trading data for October. As for speakers, please note that NY Fed President Williams and BoC’s Wilkins are scheduled to talk today. 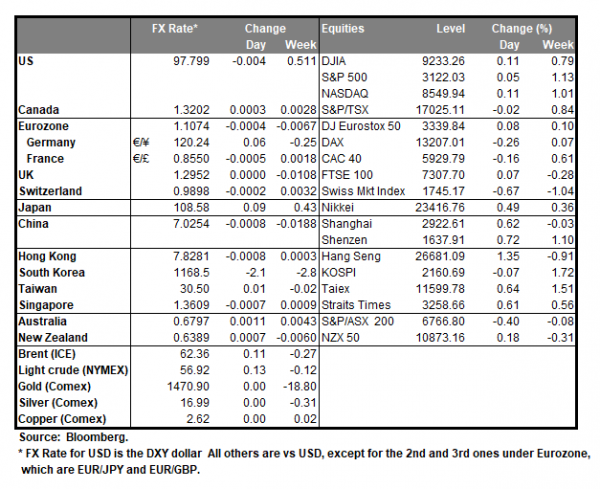