The next market-moving release for the dollar will be on Wednesday at 19:00 GMT, when the Fed releases the minutes of its latest meeting, where rates were cut again but the central bank signaled that it will pause its easing cycle. Back then, Chairman Powell hinted that the Fed may be willing to let the economy ‘run hot’, a confirmation of which in the upcoming minutes may hurt the dollar somewhat. That said, the currency’s broader outlook still seems positive.

After cutting rates for a third time this year, the world’s most important central bank signaled that it will now pause its easing cycle until further notice and allow the already-enacted stimulus some time to work before deciding whether to act again. Even though this was a more ‘hawkish’ message than the markets anticipated, the dollar was unable to hold onto its gains for long, and instead moved lower following a remark by Chairman Powell.

He indicated that it would take a “really significant move up in inflation that’s persistent” before his Fed even considers raising rates. The message was that he and his colleagues are willing to let the economy run hot for a while, meaning they would tolerate a prolonged period of above-target inflation without hiking rates. 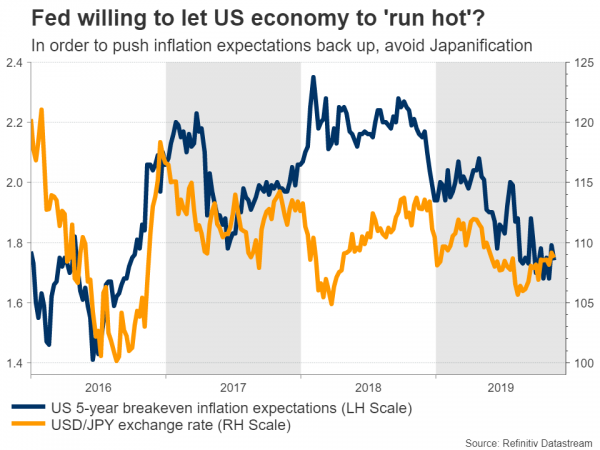 The rationale behind this is that the Fed wants to push inflation expectations back higher, in order to avoid a Japan-like situation where low inflation expectations become entrenched and eventually, self-fulfilling. For investors, the message was that the bar for any rate hike is extremely high, but that rates can still be reduced from here if a shock hits or the economy slows.

Setback for dollar, boon for stocks?

If the minutes reflect widespread support among policymakers for letting the economy run a little hot, the dollar would probably head lower as stocks push higher on the news. Equities are considered a hedge against high inflation, as their prices typically keep pace with increases in the general price level.

Beyond this, it will also be crucial to see just how big the divide between the hawks and the doves is, as that might hold implications for next year, when the voting rights within the Fed rotate again.

But dollar still the only game in town

Looking beyond this release though, the broader outlook around the dollar seems positive, even if we see a setback on Wednesday. The US economy, even accounting for its recent slowdown, is still in a much better position than the Eurozone, where growth is anemic and interest rates are at rock bottom already.

That implies that capital flows from Europe and the rest of the world will likely continue to find their way into America, which offers both a higher return and a safe environment, keeping the world’s reserve currency supported.

For this narrative to fundamentally change, either the Fed needs to start cutting rates much more aggressively, or Germany has to announce a big fiscal stimulus package to boost the struggling euro area – neither of which is likely over the coming months at least.

Taking a technical look at euro/dollar, initial resistance to advances – if the minutes signal a willingness to let the economy run hot for example – could come from the 1.1180 area.

On the flipside, immediate support to declines may be found near 1.1075, which was the inside swing low on October 25, before the focus turns to the 1.0990 zone.