The markets seem to be bracing for the possibility of the US imposing new tariffs over the coming weekend Commodity currencies such as the Aussie and the Kiwi barely moved maintaining some bearish tendencies. It should be noted that RBA’s governor Lowe stated this morning that Australian GDP was broadly in line with the bank’s expectations and that he remains confident that consumers will spend more. Chinese data on the other hand, continue to form a puzzle as the headline inflation rate released this morning hit its highest in a number of years by reaching +4.5% yoy, outperforming market expectations, while at the same time producer prices remained in the negatives. On the US-Sino trade front, news are also slow as US President Trump stated that yesterday that the US is doing well with China in the efforts to strike a deal, yet the markets remained unimpressed. Analysts tend to underscore once again that comments like the above come and go, yet no deal seems to be in sight, tiring the markets. We could see key risk events such as the Fed’s meeting tomorrow shaking the markets, yet we could see the market’s worries about the incoming US tariffs on Chinese products prevailing near the end of the week. AUD/USD dropped testing the 0.6822 (S1) support line. We tend to maintain a bearish outlook for the pair as long as the downward trendline, incepted since the 3rd of the month continues to guide the pair’s price action. It should be noted that the 0.6822 (S1) support line seems to be a formidable support line as it was continuously tested in the past week, yet without a clear breaking. Hence it would be typical that the pair’s price action formed a declining triangle, which increases the pressure on the pair’s price action. Should the bears be in charge of the pair’s direction, we could see the pair breaking the 0.6822 (S1) support line and aim for the 0.6800 (S2) support level. On the other hand, should the bulls take over, we could see AUD/USD breaking the prementioned downward trendline and aim if not break the 0.6850 (R1) resistance line.

…while the Looney strengthens…

The Looney strengthened against the USD yesterday, albeit no indigenous reason for such a rise is apparent. Main reasons cited by analysts include, a broader positive sentiment of the market which could have fed a more risk on appetite. It should be noted that also oil prices seem to continue to move in an upward funnel despite yesterday’s drop. Analysts tend to note that the next key risk events for the Looney are expected to be BoC governor Poloz’s speech on Thursday and the US tariffs deadline on Sunday the 15th of December. Poloz is expected to maintain the view that the banks rate hike path is going to remain data dependent, however the recent data over the past few days were quite disappointing especially for the labor market. USD/CAD seems to be correcting some of Friday’s gains as the market recovers from shock provided by the release of the US and Canadian employment data for November. The pair during today’s Asian session seems to be testing the 1.3230 (R1) support line, now turned to resistance, yet the breaking seems not to be clear yet. We tend to maintain a slightly bearish outlook for the pair as it continues its drop, however the low volatility seems to also be indicating an undecided market. Should the pair remain under the selling interest of the market, we could see it aiming for the 1.3125 (S1) support line. Should on the other hand the pair’s long positions be favored by the market we could see it breaking the 1.3230 (R1) resistance line and aim for the 1.3335 (R2) resistance level.

Today, during the European session we get Norway’s CPI rates for September, UK’s GDP growth rate for October and Germany’s ZEW economic sentiment for December. Just before the Asian session starts we get from the US the API weekly crude oil inventories figure for past week, while during the Asian session we get Japan’s Corporate Goods Prices for November. Also the BoE releases Financial Stability Report today. 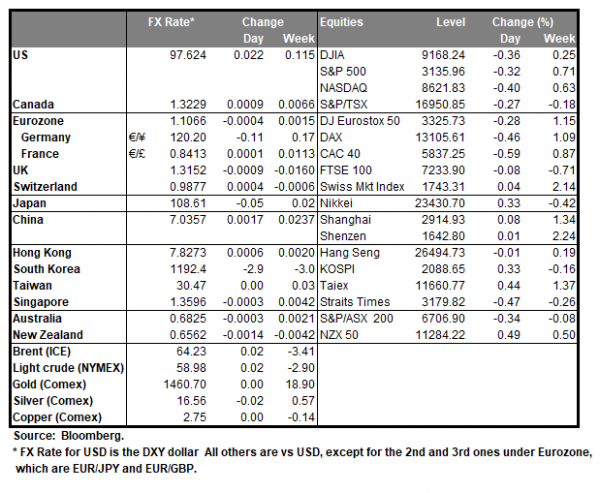