The November Labour Force Survey surprised to the upside, rising 37.2k from revised –24.8k in October (originally –19.0k). The market median forecast was for 15k (an around trend estimate), Westpac was looking for a modest 8k rise and the range of estimates was a wide –10k to +40k. The gain in November resulted in a flat annual pace of 2.0%yr but we also note that the six month annualised pace was also flat but at a slower 1.6%yr. As such looking through the monthly volatility in the last three months the average monthly gain was just 9.5k compared to 8.9k in October and a recent peak of 31.2k in May. This recent moderation in employment growth is consistent with softer domestic demand. 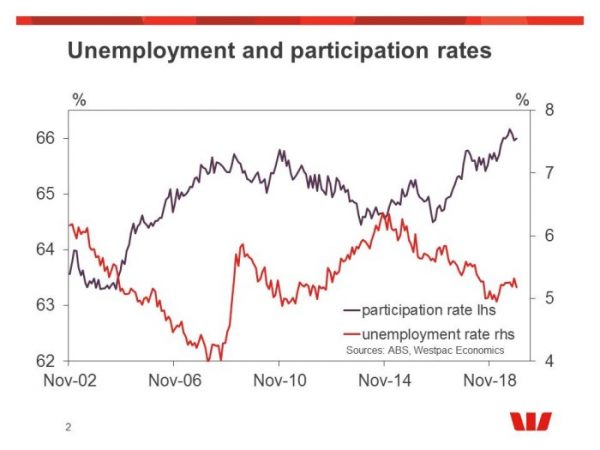 The mix of employment did, however, print a slightly softer picture of the labour market than the headline numbers. Just about all of the gains were in part-time employment, which lifted 35.7k while full-time lifted just 4.2k. Nevertheless, total hours work still managed to lift 0.2% in the month boosting the annual pace to 1.7%yr from 1.4%yr. This pace is, however, still softer than the pace of growth in total employment (2.0%yr). 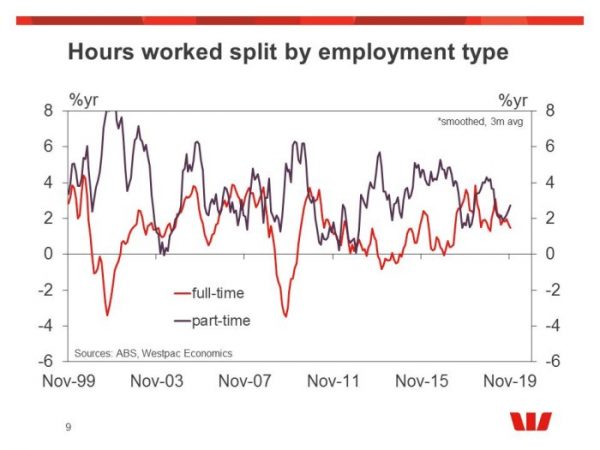 This month the state data is also revealed that the story about the strength of the labour market was a little more mixed. Just about all of the gains in employment occurred in Qld and Vic (+17.3k and +13.7k respectively) while NSW reported a small fall of –2.8k. However, due to a 0.4ppt decline in participation in NSW the unemployment rate there fell 0.1ppt to 4.7% while it fell 0.2ppt in Vic to 4.6% (now lower than NSW) and there was a 0.1ppt fall in Qld to 6.3%. We also note that the lion’s share of the fall in participation in NSW was explained by the fall in male participation. 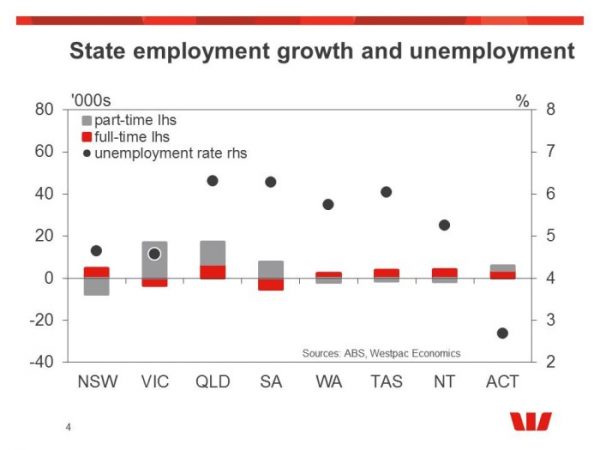 While today’s update was weaker than we were anticipating, it was not enough to change our view that the labour market has softened consistent with the moderation in domestic demand. From here we are expecting a modest gradual rise in unemployment and underemployment. The Australian economy is a long way from the RBA’s full employment aim of 4.5% and if the Bank wants to use monetary policy to drive the economy in that direction, it has a lot more work to do.

In our view, while rate cuts along with the Government’s tax offset payments should help to support demand, we think it will be insufficient to get economic growth moving back to trend or above in 2020. We have already seen the leading indicators of employment point to a near term softening in employment growth. Our Jobs Index (based on the various business surveys) suggest that employment growth is set to slow to around 1¾%yr by Q2 2020, unemployment expectations have been trending higher since early 2019 (pointing to expectations of slower employment growth as well as rising unemployment), the Australian Government Internet Job Index has fallen 2% in the year to 2019 Q3 while ANZ job ads is down around 11% in the year to November. 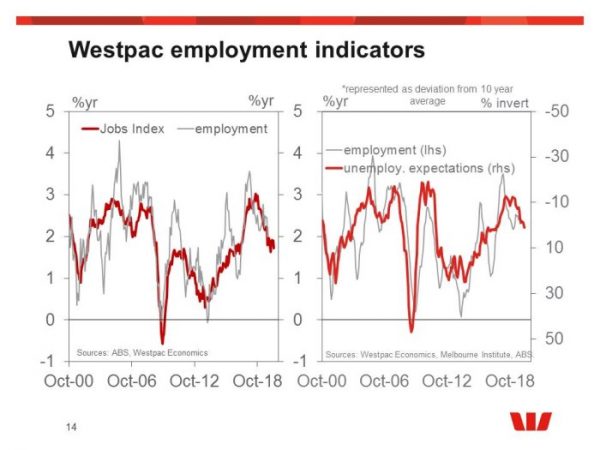 Westpac is expecting employment growth continuing to moderate in early 2020 and while participation is expected to decline it will only provide a partial offset so we hold to our view that unemployment is likely to hit 5.6% in early 2020.