It’s been a rather eventful first week of the year for financial markets and while next week may not be quite so action-packed, when it comes to the current climate, who knows what’s around the corner.

As far as the coming week goes, politics will continue to dominate but there are some interesting central bank meetings, as well as a few interesting economic releases that will certainly draw attention.

The signing of the US-China phase one trade deal will naturally be all over the front pages next week. Let’s face it, it’s about time. But it’s this week’s events in Iraq and Iran that people may be more interested in at this stage. Both sides may have shown a willingness to de-escalate but when it comes to these two countries, who knows. 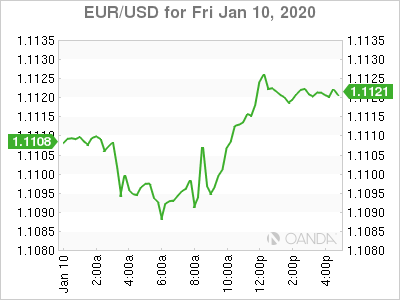 It’s been rather quiet by UK standards. Boris Johnson’s strong majority in Parliament has enabled a more peaceful and straightforward process when it comes to getting his Brexit Withdrawal Agreement through Parliament. Now it’s over to the Lords but unlike on previous occasions, this is unlikely to pose any problems. Focus now shifts to phase two – trade negotiations. Ursula Von Der Leyen, President of the European Commission – was in London this week and while much of the talk was very cordial, it’s clear she believes the end of year deadline is tight and a lot has to be achieved in that time. We may not see the same kind of volatility in the pound in the near-term though. Of course, should we get closer to the end of the year, if no-deal looks possible, the panic will once again set in.

The focus next week will shift back to the US-China trade war. Beijing has given the all clear that for Vice Premier Liu He to sign the phase-one deal in Washington DC on January 15th.  Markets are anxiously awaiting the release of the details of the phase-one trade deal, which could start to leak a couple days before signing ceremony.

The week ahead will see a plethora of data that should highlight the US economy remains resilient. Inflation data should confirm the Fed’s decision to be on hold and the first couple regional surveys in January should so pointedly strong rebounds. Much of the focus will fall on retail sales, which should paint a picture of very strong holiday season despite poor reports from Macy’s, Kohl’s and JC Penney.

Earnings season also begins with the big banks reporting first.  All signs point for the financials to indicate the US consumer remains strong.  Key quarterly updates will be followed by Fastenal, Alcoa, Taiwan Semiconductor and trucking giant, JB Hunt.  With trade tensions simmering, Wall Street will look to see if corporate America will have improved guidance for 2020.

Democrats are slowly abandoning Trump’s impeachment saga as they turn their focus back towards the Presidential election.  The Iowa caucuses are on February 3rd and we will see if Joe Biden can hold off the other candidates.  Iowa will be key for Mayor Pete Buttigieg and if we see the two progressives candidates show they can continue their movement.  Despite almost bringing the US into a war with Iran, President Trump still has a strong economy and had the general consensus believing he will get re-elected in November.

As trade tensions ease and the US-Iran conflict simmers down, emerging markets could see the Mexican peso become the favored carry trade.  Mexico’s Banxico has their key rate at 7.25%, extremely high when compared to the G10 currencies.  Inflation decelerated and still remains near the midpoint of the central bank’s target range and with that in mind, we could still see Mexico have one of the best interest rates out there.

With USMCA slowly getting finalized, we could continue to see the peso have a supportive macro-economic environment.

Taiwan Elections this weekend. Independence minded incumbent likely to win. Any suggestion of Taiwan independence could see threats made by China and pose a strong negative risk to Asian markets on Monday.

On Saturday 11th January, South Africa’s ruling ANC Party is scheduled to issue a statement on its plans for the year ahead.

The South Africa Reserve Bank (SARB) meets on Thursday but no rate change is expected.

The Central Bank of the Republic of Turkey (CBRT) is scheduled to meet on Thursday and another 50 basis point rate cut is expected. The central bank has surprised to the upside in the past though thanks to the lower levels of inflation in the country.

Protests continue. Taiwan elections may give new impetus if the liberal candidate wins. Threats at Taiwan by China Monday could be strongly negative for Hong Kong stock market.

China to sign an interim trade agreement in Washington DC next week. China GDP and new loans also next week.

China sabre rattling towards Taiwan could be negative for China stocks and CNH. Below forecast GDP and new loans negative for stocks in China and regionally.

Ongoing protests over citizenship laws. Escalation from either side or political rhetoric could be negative for IDR and India stocks.

Australia bushfires to continue to impact domestic growth and erode Federal Govt support. Any severe downward bias to Australian data would be detrimental to local equities and the AUD, positive for bonds.

Oil prices have more that reversed the spike in prices that came in the aftermath of the Soleimani assassination. Brent is trading back around $65 and is looking pretty stable at this point. Barring any further escalation in the middle east, we could see oil prices stabilize around these levels in the near-term, with global growth prospects having improved, the US and China preparing to sign a trade deal and OPEC+ committed to re-balancing.

Safe haven gold has found some stability towards the back end of the week around $1,550, not far from the levels we were trading at around at the start of the year. Gold will remain susceptible to safe haven dashes, although the tragic airliner accident may force people to reconsider their actions and encourage a sustained de-escalation.

The dollar has rebounded over the course of this week which may keep the downward pressure on the yellow metal although it’s worth remembering that prior to the events of the last week, the dollar was coming under a little pressure and supporting gold. It will be interesting to see whether that continues going forward.

Like a slow puncture, the bitcoin rally is slowly deflating but there’s clearly some resilience there. The cryptocurrency faces a test around $7,500 which provided strong resistance throughout the latter part of December. A hold around here could put further pressure on $8,500 where bitcoin ran out of steam earlier this week.