JPY strengthened against the USD, after worries about the new pneumonia virus started affecting Chinese stock-markets and weakened the Yuan as well as the Aussie. It should be noted that BoJ remained on hold as was expected at -0.10% practically making no changes in its monetary policy keeping the JPY largely unimpressed. The bank also in its forward guidance mentioned that interest rates are to remain at current or lower levels for as long as needed for downside risks to be addressed and inflation to pick up. Also, the bank maintained as expected the 10 year JGB yield target around 0% as expected. At the same time the bank raised its GDP expectations and lowered the respective CPI forecasts. We could see investors watching closely BoJ governor Kuroda’s press conference later on. Should the headlines continue to boost safe haven inflows for the JPY, we could see it strengthening further. USD/JPY dropped during today’s Asian session as the Japanese currency strengthened, aiming for the 109.70 (S1) support line. We maintain our bias for a sideways movement of the pair, however the pair’s prices could be affected by further safe-haven flows for the Japanese currency. Should the pair come under the selling interest of the market once again, we could see it aiming, if not breaking the 109.70 (S1) support line travelling further south. On the flip side should the pair’s long positions be favoured by the market, we could see it breaking the 110.35 (R1) resistance line aiming for higher grounds.

AUD weakened against the USD, after worries about the new Chinese flu increased. Worries seem to increase as the new flu seems to be spreading and worries tend to increase as Chinese New Year celebrations are to begin next weekend and extensive travelling back home for many Chinese is expected. Despite the virus remaining rather contained until now risk increases for it spread further due to the prementioned travelling for the Chinese Lunar new year. Analysts tend to note that the worries tended to weaken Hong Kong stocks and the Yuan while at the same time strengthen safe-haven JPY. It should be noted that Australia tends to attract a substantial number of Chinese tourists which may be affected by the disease. Should the news continue to increase worries about the Chinese flu we could see the Aussie weakening further. AUD/USD continued to drop yesterday clearly breaking the 0.6875 (R1) support line, now turned to support and continued to aim the 0.6850 (S1) support level. We maintain a bearish outlook for the pair as it remains below the downward trendline incepted since the 16th of January. Should the bears maintain control over the pair’s direction we could see it aiming if not breaking the 0.6850 (S1) support line aiming for the 0.6820 (S2) support level. Should the bulls take over, we could see the pair breaking the 0.6875 (R1) line and aim for the 0.6905 (R2) hurdle.

Today during the European session, we UK’s employment data for November. Also, in the European session we get Germany’s ZEW economic outlook for January, as well as New Zealand’s milk auction prices. During today’s American session, we get Canada’s manufacturing sales growth rate for November. During Wednesday’s Asian session we get Australia’s consumer confidence indicator for January. As for speakers, please note that US President Trump is to speak at the World Economic Forum taking place at the Swiss resort of Davos. Please note that the event could continue to meet the headlines in the coming days as it is to continue until Friday the 24th of January. 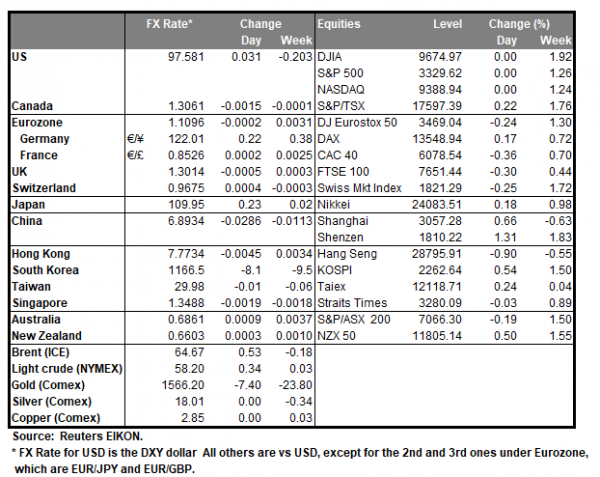