Today during the American session (15:00, GMT) we get BoC’s interest rate decision which is widely expected to remain on hold. Currently CAD OIS imply a probability for the bank to remain on hold of 97.50%. Should the bank remain on hold as expected, we could see the market’s attention turning to the accompanying statement. With inflation expected to remain at rather high levels and unemployment at rather low levels, internal financials could allow for a more optimistic tone. The recent signing of the US-Sino initial deal could be removing a substantial uncertainty in the bank’s outlook, providing a more promising tone for the global economic outlook as well as oil prices, despite no such signs being present yet. Also, the progress made in the USMCA deal could be good news for the bank. Also please bear in mind that BoC Governor Poloz is to deliver a press conference later on (16:15, GMT) hence volatility for CAD could extend. USD/CAD despite some slight bullish tendencies yesterday, maintained a largely sideways motion between the 1.3125 (R1) resistance line and the 1.3075 (S1) support line. We maintain our bias for a sideways movement of the pair, however should the bullish pressures continue to pressure the pair’s rates higher, we could see the bulls dominating. Should the pair come under the selling interest of the market, we could see it aiming, if not breaking the 1.3075 (S1) support line aiming for the 1.2930 (S2). On the flip side should the pair’s long positions be favoured by the market, we could see it breaking the 1.3125 (R1) resistance line and aim for the 1.3230 (R2) resistance level.

…while the coronavirus worries seem to still weigh on the Aussie…

The Aussie continued to weaken against the USD yesterday as worries about the coronavirus spread and increased. It should be noted that the death toll seems to have reached nine persons, while at the same time the first recorded case was found in the US while South Korea, Thailand and Japan have also confirmed cases. The World Health Organization called for an emergency meeting, as worries increase about the outbreak, reminding the SARS outbreak. Chinese President XI stated that people’s lives and health should be given top priority and the spread of the outbreak should be resolutely curbed. Should the news continue to boost worries in the markets, we could see AUD and CHN weakening, while safe havens such as the JPY could strengthen. AUD/USD continued to drop yesterday clearly breaking the 0.6850 (R1) support line, now turned to support and continued to aim the 0.6820 (S1) support level. We maintain a bearish outlook for the pair as it remains below the downward trendline incepted since the 16th of January. Should the bears maintain control over the pair’s direction we could see it breaking the 0.6820 (S1) support line aiming for the 0.6790 (S2) support level. Should the bulls take over, we could see the pair breaking the 0.6850 (R1) line and aim for the 0.6875 (R2) resistance barrier.

Today during the European session, we France’s business climate for January and from the UK January’s CBI Trends for Orders. In the American session, we get Canada’s headline and core inflation rates for December before the BoC’s interest rate decision is to be released. Also, in the American session we get the US existing home sales figure for December, while just before the Asian session starts we get the API weekly crude oil inventories figure. During Thursday’s Asian session we get Japan’s trading data for December as well as Australia’s employment data also for December. As for speakers, there are no major speakers on the schedule, yet the World Economic Forum, taking place in the Swiss resort of Davos could create some headlines as it enters its second day. 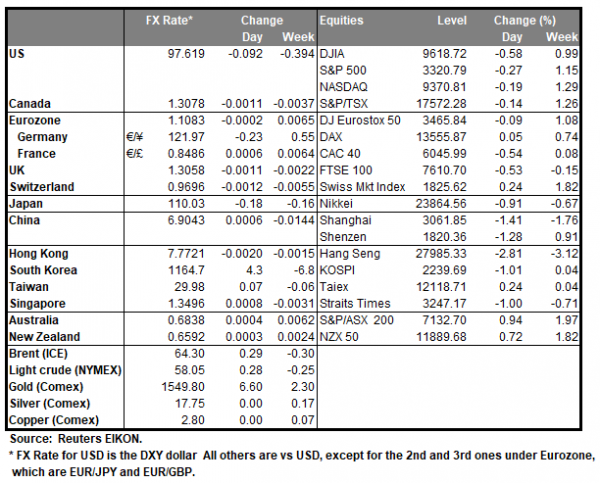 COVID-19: How Would Fed Easing Help?

The Fall Of The Mexican Peso