Expect AUDUSD price action today to be heavily pre-occupied by December’s Employment Report (11.30am AEDT), given the report will be defining for market expectations leading into the RBA’s Feb. 4th rate decision. Market pricing currently looks split with an implied 48% probability the RBA cut at its next meeting.

We think Dec. likely sees a pullback from November’s substantial 39.9k increase in jobs, in line with previous years and Reuters consensus forecasts of 15k. And as always, we keep a watchful eye on the full-time and part-time split, with more full-time jobs AUDUSD positive.

AUDUSD continues to trudge below the 55d-MA and 200d-MA in a range-bound fashion. Multi-month trend support could kick into gear and see AUDUSD test higher, but will largely be dependent on the print. 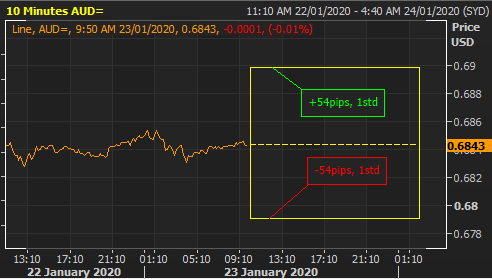 Cautious risk sentiment around the announcement has ASX lower 20pts at the open.

USDCAD spiked ~70pips through 1.31 to hit January highs following an eventful BoC meeting, and despite an in-line Dec. CPI print. Poloz’s slight change to forward guidance emphasised the bank “will be watching closely to see if the recent slowdown in growth is more persistent than forecast”, and thus, be of greater data-dependency.

More neutral than expected communications had us believing the BoC were firmly on hold. But it looks like the combination of choppy data from October and a higher degree of uncertainty sees dovish risks come back into the fold. We maintain long CAD bias and think opportunity presents itself to get short EURCAD.

GBPUSD cracked 1.31 overnight following a strong manufacturing CBI survey that lessened bets that the BoE cut rates on Jan. 30. The survey which captures manufacturing sentiment saw business optimism turn positive, jumping to +23. But interestingly, only had the level of total order books tick marginally higher to -22 from -28 (Dec.).

While this could be an overbought move in the short-term, especially with markets waiting to digest UK PMIs tomorrow. Ultimately, it falls in line with our longer-term 2020 thesis that GBPUSD could see greater portfolio inflows having been structurally underweight on Brexit risks.

GBP/USD Continuation Of The Rebound