Fourth-quarter inflation numbers out of New Zealand are due at 21:45 GMT on Thursday, and forecasts point to a solid increase in the yearly CPI rate. If met, such a print would feed the narrative that the economy is getting its feet under it after a soft 2019, and further diminish the odds for the RBNZ to cut rates again in the coming months. That might help the kiwi recover somewhat, though the risks surrounding the currency seem increasingly asymmetric.

Wind back in the economy’s sails

The past year was a challenging period for New Zealand’s export-heavy economy, with economic growth slowing sharply amid a toxic combination of depressed business confidence domestically and sizzling trade tensions globally.

Yet, this narrative seems to be turning around now. Global risks have eased, and the nation’s data pulse has improved, albeit not dramatically. Third-quarter GDP growth was faster than the Reserve Bank of New Zealand (RBNZ) expected in its latest forecasts, business confidence is finally picking up, and the housing market has strengthened quite substantially – all of which will be music to policymakers’ ears. 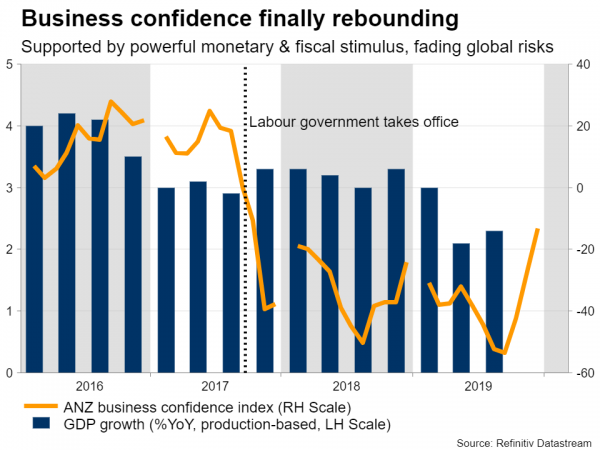 It seems that the RBNZ’s rate cuts last year, alongside the government’s substantial spending packages, are putting the wind back into the sails of New Zealand’s economy. What’s more, the government recently announced another substantial increase in investment spending, which will focus mainly on infrastructure projects. That will further help to underpin demand in the coming year(s), painting a brighter picture for both future growth and inflation.

CPIs to reaffirm this narrative

The upcoming inflation data are set to confirm this cheerful narrative. The yearly CPI rate is forecast to nudge up to 1.8% in the fourth quarter from 1.5% in Q3. If this figure is met, it would be notably higher than the 1.6% the RBNZ anticipated in its latest set of economic forecasts, decreasing the pressure on the central bank to add any more stimulus and perhaps helping the kiwi recover some of its recent losses.

To be fair, markets are no longer truly expecting any action from the RBNZ in the foreseeable future, with the implied probability for a rate cut by year-end resting at a mere ~38%, which seems more or less fair.

While this pricing shows that investors are indeed confident the economy is on a recovering path, it also makes the risks around the kiwi asymmetric going forward.

If the data remain solid and the overall economy continues to move in the right direction, the kiwi could gain but perhaps only modestly, as there isn’t much left to price out in terms of rate cuts and the RBNZ certainly won’t be raising rates anytime soon. On the other hand, if the data takes a turn for the worse or some ‘shock’ hits New Zealand, there’s a lot of room for rate cuts to be priced in and therefore ample of potential downside in the kiwi.

To be clear, this doesn’t imply that the outlook for the currency is negative. Rather, that any bad news would probably hit the kiwi much harder than any good news would lift it.

Looking at kiwi/dollar technically, a rebound in the pair may stall first near 0.6665, where an upside break could open the door for another test of the 0.6755 top.