We are only one month into the New Year and investor questions have never been higher on a flurry of events. So far, we’ve seen a China-U.S. trade deal, the signing of the USMCA, the sudden escalation of U.S. tensions with Iran and, most recently, growing concerns over a coronavirus outbreak. These topics have been addressed in various economic notes on our website, except for the latter. So, I’ll spend a moment on this rapidly evolving event that has heightened global uncertainty.

It’s very early days and economic assessments will accordingly evolve. However, the 2002-2003 SARS experience offers a thought-framework, which will depend on:

The first is a complete unknown at this stage with evidence pointing to broad geographic reach, but relatively few cases outside of China. A large geographic reach combined with severity in terms of the number of illnesses would lead to a progressively larger global economic disruption. There’s little doubt that confirmed cases will continue to rise globally in the near-term, but Chinese authorities have demonstrated a swifter and more transparent response than the SARS episode, both domestically and in alerting the World Health Organization. In addition, health providers within impacted countries appear to be mobilizing with greater speed and discipline, no doubt informed by lessons-learned from the SARS experience.

The second factor on economic reach has two dimensions. The outbreak of the new coronavirus occurred in a region of China that is smaller in economic heft. The epicenter for SARS was a large economic region (Guangdong), which accounted for nearly 12% of China’s GDP at that time. This is roughly three times the economic weight of the current outbreak region of Hubei. Likewise, surrounding regions have a smaller economic weight relative to the SARS episode. However, on the flip side, the more aggressive response of the government to block large swaths of transportation hubs and adjust New Year’s events across the country suggest the economic weight could still turn out to be similar or larger for China than the previous episode. Indeed, Wuhan, the capital of Hubei province, happens to be a large rail, air and road transportation hub.

It’s reasonable to assume that mainland Chinese growth will absorb significant economic loss in the current quarter and potentially the next. Estimates guided by SARS place the annual impact at 1% or more (Chart 1). There will be some permanent loss of activity, but once evidence emerges that the virus is contained or leveling off, subsequent quarters would capture strong economic rebounds as business operations and consumer activity normalizes. It’s important to note that during the SARS episode, the economic loss stemmed from the government and business impact to alter activity, along with changes in consumer behavior (such as reduced travel, reduced attendance in public spaces such as restaurants, etc.). It was not from the magnitude of the loss of life and related disruption. Globally, SARS was estimated to have caused 800 deaths. The Centers for Disease Control and Prevention (CDC) placed deaths related to influenza at roughly 34,000 for the U.S. alone during the 2018-19 season. 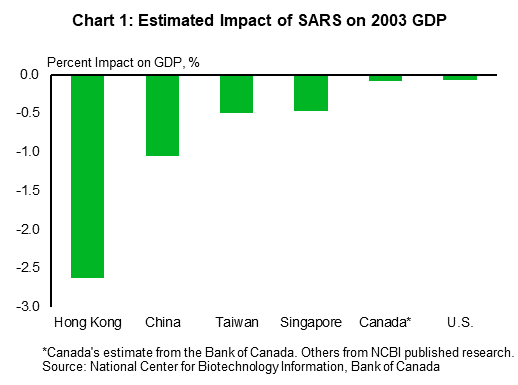 Market sentiment is the final consideration for economic impact assessment. So far, it has been shaken, but not stirred. Bond, equity and volatility measures have moved in the direction of the risk and uncertainty, but with some restraint. Markets will always fear what they cannot see and accurately measure. Unfortunately, if SARS was any indication, opaqueness surrounding the spread of the virus and its impact will remain in place, and potentially worsen, in the weeks ahead.

Even so, for negative market sentiment to have a worrisome transmission into undermining economic fundamentals, it would have to reflect a fair degree of persistence (i.e. more than a single quarter). History would argue against this outcome. For instance, the VIX captures expectations of U.S. stock market volatility. During the peak SARS period (January to March 2003) it did move higher by roughly 10 points and remain elevated through that timeframe (Chart 2). However, this rise also coincided with the military mobilization and subsequent commencement of the Iraq war in March of that year. Even with this toxic combination, the VIX upward shift lacked duration and depth. 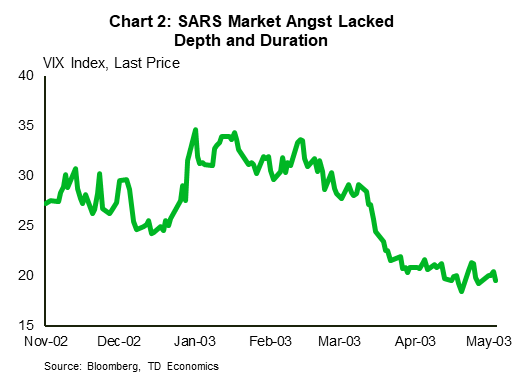 Today it has risen by less than 10 points. Interestingly, this fear-based metric captures a more tempered response by financial market participants relative to periods when trade tensions flared up between the U.S. and China (Chart 3) in the spring and summer of 2019. 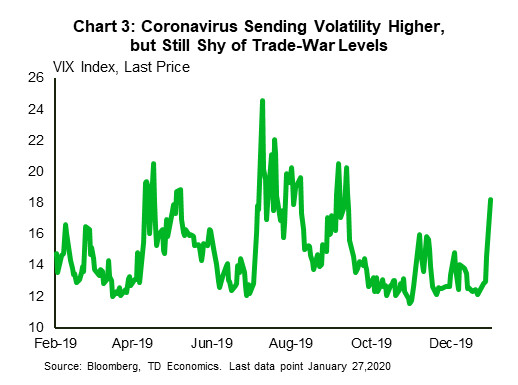 It is early days and estimating economic impacts would be purely an exercise in speculation. What we can say is that if this coronavirus does follow a similar path as SARS, the impact on Canada and the U.S. would be limited to 0.1 percentage points or less. This is quite small, although there would be distributive impacts. The negative economic weight would be heftier in the current quarter where activity is most disrupted, followed by rebounds. For instance, the Bank of Canada estimated SARS-related events shaved 0.6pp from GDP growth in a single quarter, with gains of 0.15pp and 0.25pp over the subsequent two quarters. Fortunately, both countries have sophisticated health care systems to respond to any stress event, as well as a high ability to respond via fiscal policy should the situation require. And, if pushed, both central banks also have the greatest scope to provide additional monetary support relative to peer regions in Europe and Japan. All told, we maintain confidence that the swift response of authorities globally will arrest the evolution of the outbreak with time. Naturally, we will closely monitor and evaluate events as they unfold. During this period, however, be mindful that there will likely be ongoing injections of volatility under heightened market uncertainty.