The Aussie, the Yuan as well as the Kiwi weakened during today’s Asian session, as the worries about the coronavirus intensified. China reported a ,b>substantial rise of new cases as well as deaths, practically intensifying worries about how high the death toll could be as well as for a possible adverse effect on the Chinese economy. The steep, sudden rise seem to have been caused by new clinical diagnosis methods (CT scanning) and the overall situation created confusion as there were revisions of prior cases, which intensified the market’s worries even further. Analysts tend to note that should there be more clarity on the issue, we could see the situation calming somewhat, yet a risk averse stance of the market may continue to be present. Market expectations for an overspill of a possible slowdown in the Chinese economy reversed the AUD and NZD’s slight strengthening since yesterday and should the news continue to fuel market worries we could see the adverse effect being magnified for the two currencies. AUD/USD dropped during the Asian session today, breaking the 0.6723 (R1) support line, now turned to resistance. As the pair broke the upward trendline incepted since the 10th of the month we switch our bullish outlook for the pair, in favour of a sideways scenario initially, albeit we suspect that the bears may be just around the corner for the pair. Should the pair remain under the selling interest of the market, we could see it aiming if not breaking the 0.6685 (S1) support line, while travelling southwards. On the other hand, should the pair’s long positions be favoured by the market, we could see AUD/USD breaking the 0.6723 (R1) resistance line aiming for the 0.6755 (R2) resistance level.

The common currency weakened against the USD yesterday as the market’s mood worsened after the release of heavily negative rates for manufacturing output in the area. Specifically, the manufacturing output growth rate, contracted by more than expected for December, increasing worries about Eurozone’s economic outlook. The results intensified market worries after the negative results of the German manufacturing sector. It should also be noted that the common currency was also negatively affected from dovish expectations of the markets about the ECB, as rumours about a possible rate cut increase. Also, the corona virus effect for the Eurozone cannot be reliably measured yet we expect the hit to be substantially adverse for the Eurozone currently. We could see the common currency being more data driven in the next few days and should there be more negative headlines, EUR could weaken further. EUR/USD continued to drop yesterday, breaking the 1.0885 (R1) support line now turned to resistance. We maintain our bearish outlook for the pair as it remains under the spell of the downward trendline incepted since the 31st of January. It should be mentioned that the pair’s efforts to clearly break the prementioned downward trendline proved insufficient, underscoring the strength of the downward movement. If the bears maintain control, we could see the pair breaking the 1.0835 (S1) support line, aiming for lower grounds. On the other hand, should the pair come under the control of the bulls, we could see it breaking the 1.0885 (R1) resistance line and aim for the 1.0940 (R2).

During the early European session, we get from France the ILO unemployment rate for Q4 and a bit later Germany’s final HICP rate for January. In the American session we get the US inflation rates for January as well as the US initial jobless claims figure. Just before the Asian session starts, we get New Zealand’s manufacturing PMI for January. As for speakers, ECB’s Lane, Norgesbank’s Governor Olsen, Dallas Fed President Kaplan and NY Fed President Williams speak. 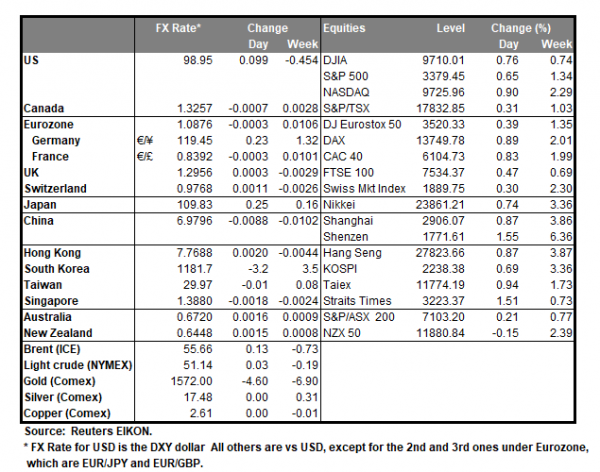