Japanese GDP number for Q4 in 2019 are coming up during the early Asian session on Monday at 01:50 GMT. Adding some significant pressure to Japan’s economy lately is the China’s coronavirus, which has threatened exports and factory output, as well as hitting tourism in the country.

The economy expanded in the third quarter at a faster pace than anticipated, driven by stronger capital investment and private consumption ahead of the October 1 consumption tax increase. However, GDP is forecasted to print a negative reading of 3.7% on annualized basis in the October-December quarter from +1.8% in the third quarter. This would be the first contraction since the last quarter of 2018 and the strongest decline since the second quarter of 2014 when GDP plunged by 7.4%, which was when Japan last increased the sales tax. The quarterly growth is predicted to drop to -0.9% after the economy grew 0.4% in Q3. 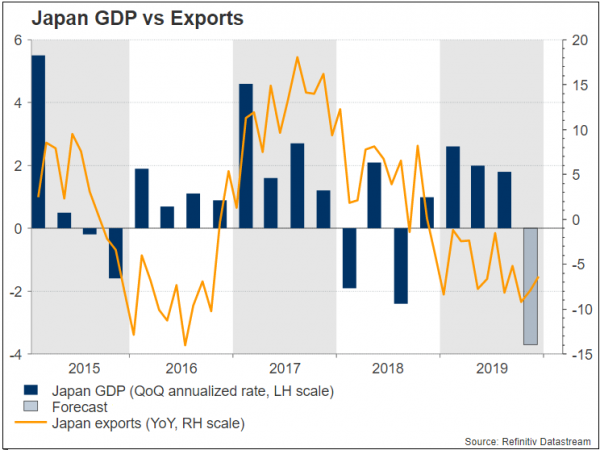 Looking ahead to the first quarter, a rebound may be difficult to come by. The tourism and airline industries were hit hard by plummeting demand during the Lunar New Year, which is one of the most profitable times of the year. During the 2019 holiday, almost ten million Chinese visitors went to Japan, 20 times as many as in 2002, so leaders of Japanese financial institutions say that the economic impact from reduced demand from overseas visitors cannot be ignored and may affects the first quarter of 2020. Additionally, exports and capital spending are forecasted to stagnate, and consumer spending would stay weak. Japan is among countries worst affected by the epidemic outside of China, with 251 confirmed cases including those on a cruise ship.

Japanese Prime Minister Shinzo Abe asked the government to take action, easing the impact of the coronavirus on the economy, including tapping state budget reserves. The Bank of Japan’s Maeda mentioned that the central bank will support the economy by maintaining its massive stimulus program but stopped short of signaling additional monetary support. Also, some in the BOJ are worrying that supply chain disruptions could hurt Japanese firms if Chinese factory shutdowns continue for weeks. The BOJ’s next rate meeting is scheduled for March 18-19.

As for the yen, the expectation is a losing session on Monday in case of a strong contradiction on the GDP figures. Still, against the US dollar, the currency is currently trading to hold slightly below the 110.00 handle, posting a positive week so far. If these efforts prove unsuccessful, the market could see more gains, with the price probably heading to the seven-month high of 110.28 and the 110.65 resistance. If the pair surges above this barrier, it could hit the 111.00 psychological mark, last hit on May 2019.

On the other hand, a successful drop beneath the 50-day simple moving average (SMA) would open the door for the 108.30 support, breaking the five-and-a-half-month ascending trend line to the downside. More losses could send USDJPY towards the next low of 107.65. 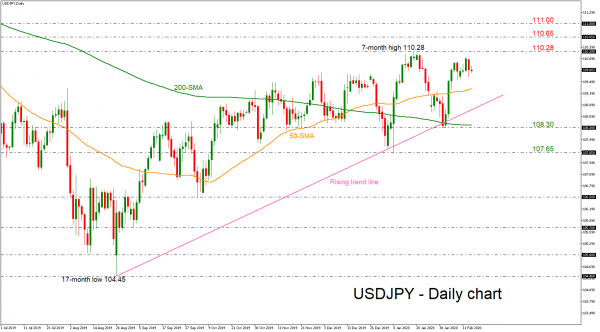