The USD weakened across the board yesterday as the initial jobless claims for the week ending 21st of March reached a historic high of 3.28 million. The reading underscored the possible severe adverse effects of the coronavirus outbreak to the US economy. Analysts tend to note that the release instigated a market reaction which practically factors in the fact that the US economy will be hit hard. On the other hand, it should be note that US stock-markets had a rather good day yesterday as they rose, providing a glimpse of hope. Also, the fact that the US Senate passed a 2.2 trillion stimulus, while at the same time US politicians in the House of Representatives assured the US that it will also pass the bill with a strong bipartisan majority improved sentiment somewhat. Please note that the House of Representatives is to vote on the bill today, while the US president stated that he will sign the bill as soon as it clears from the US Congress. Should the USD continue to weaken in today’s European and American session, we could see it having one of its worse weeks for the past ten years. EUR/USD rallied yesterday breaking consecutively the 1.0955 (S2) and the 1.1010 (S1) resistance lines, now turned to support and tested the 1.1060 (R1) resistance hurdle. We maintain a bullish outlook for the pair as it remains above the upward trendline incepted since Monday the 23rd of the month, which please note, has steepened its slope. Should the bulls remain in control over the pair’s direction, we could see it breaking the 1.1060 (R1) line and aim for the 1.1120 (R2) level. Should the bears take over, we could see the pair breaking the 1.1010 (S1) support line and aim for lower grounds.

The pound strengthened against a number of its counterparts yesterday and especially the USD as grim US employment data were released. It should be noted that the pound had weakened considerably in the past days as worries about the corona virus outbreak in the UK and its possible adverse economic effects were intensifying. As expected, BoE remained on hold yesterday maintaining rates at the lowest of levels of +0.10% as it had already proceeded twice with rate cuts in March. Also, despite the bank maintaining its QE program and its lending program unchanged, at the same time it stated that it was prepared for further action. Also, the bank stated that it will monitor whether commercial banks will pass on the lowering of its interest rates, in order to ease credit terms for the market. Finance minister Rishi Sunak on Thursday rolled out a package to pay 80 percent of the earnings of self-employed people who lost income because of the lockdown of the country. The measures were on top of prior measures of 300 billion pounds for distressed businesses. Cable also rallied yesterday breaking all of our resistance levels and turning them into support lines, as it landed above the 1.2200 (S1) level. We could see the pair maintaining an upward direction today should the positive sentiment for the pair’s long positions continue. However, as the RSI indicator below our chart tends to confirm the dominance of the bulls by reaching the reading of 70, at the same time we could see the pair’s long positions getting overcrowded. Should cable’s long positions be favored by the market, we could see it breaking the 1.2400 (R1) line and aim for the 1.2580 (R2) level. Should the pair come under the selling interest of the market we could see it breaking the 1.2200 (S1) line and aim for the 1.2015 (S2) level.

Today, we get UK’s nationwide house prices index for March. In the American session we get from the US the Consumption rate and the Core PCE Price Index, both for February as well as the final reading of the University of Michigan Consumer Sentiment for March and the Baker Hughes oil rig count in the US. 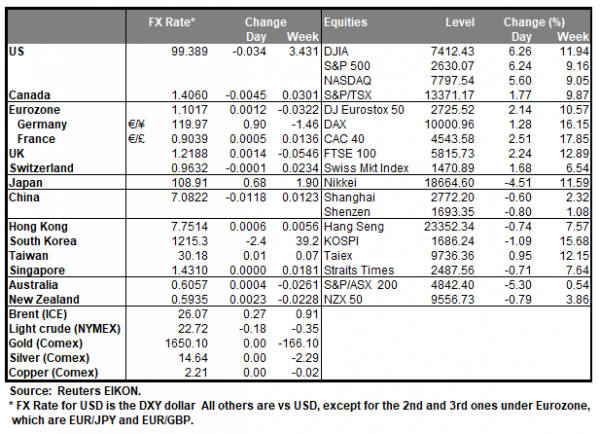