After cutting the fed fund rate target range to the zero lower bound on March 15th, the Fed has focused on alleviating strains in the financial system. Unprecedented volatility in financial markets amid uncertainty surrounding the economic outlook have sparked a massive sell-off across a wide spectrum of financial assets over the past few weeks. The sheer scale of asset price movements and volume of transactions has overwhelmed liquidity in critical financial markets, raising concerns that the disruptions could undermine the provision of credit to households and businesses at a critical time. The Fed has responded without hesitation, introducing a series of comprehensive measures in an all-out effort to maintain financial stability.

U.S. Treasury yields initially declined as expected following the 50 bps cut in the fed funds rate on March 3rd. The ten-year benchmark yield reached a historic intra-day low on March 9th falling below 0.4%, in the wake of a sudden shift in demand for safe assets. This was not surprising; US Treasuries are a traditional safe haven in times of financial market turmoil. Nor was this an unwelcome development from the Fed’s perspective. Lower rates across the term structure support more accommodative monetary conditions.

Developments over the following few days, however, were not anticipated. Nor welcome. Treasury yields began to rise as investors sold off safe assets for cash. This included mortgage-backed securities (MBSs) putting upward pressure on residential mortgage rates. The Fed responded rapidly and forcefully. An unscheduled FOMC statement on March 15th (a Sunday no less) that included an additional 100 bps cut in the fed funds rate, bringing the target range to the zero lower bound. The statement included a large-scale asset purchase program, enabling the Fed to increase its holdings of Treasury securities by at least $500 billion and agency MBSs by at least $200 billion. To put the latter figure into some perspective, the additional purchases would raise the Fed’s MBS holdings to $1.57 trillion (based on data available to March 25th), an amount equal to 6.4% of GDP. This well below levels held in the past under previous quantitative easing programs. The Fed’s MBS holdings peaked at $1.74 trillion at the end of 2014, equal to 9.7% of GDP at the time.

The announcement did not prevent further increases in long-term interest rates. The ten-year Treasury yield increased above 100 bps later in the week while the 30-year fixed-term conventional mortgage rate increased above 4.0%, up from 3.5% earlier in the month (Chart 1). The Fed went further on March 23rd by removing limits on its purchases of Treasuries and MBSs, demonstrating its willingness to “do whatever it takes”. 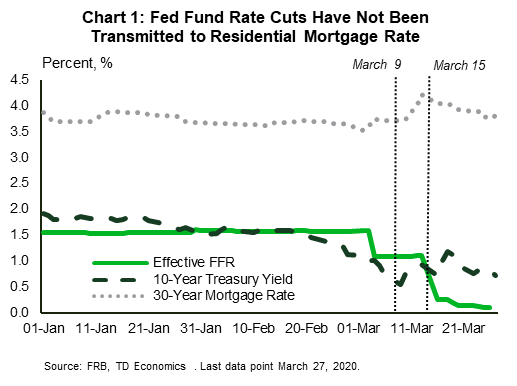 The bold policy measures have so far had a modest impact in long-term Treasury yields and little effect on mortgage rates. Experience during the global financial crisis suggests that large-scale MBS purchases by the Fed will eventually reduce mortgage rates. The Fed purchased a total of $1.1 trillion in MBS securities between early 2009 and mid-2010; the 30-year fixed-term conventional mortgage rate declined from 2.2% to 1.3% over this period.

There have also been disruptions in short-term funding markets, essential for smooth functioning of the financial system more broadly. A surge in banks’ demand for cash overwhelmed the liquidity needed to facilitate inter-bank lending, leading to sharp spikes in short-term financing rates, the commercial paper market in particular. The Fed responded to alleviate such pressures, establishing the Commercial Paper Funding Facility (CPFF) on March 17th. The CPFF will provide the liquidity needed to ensure the smooth functioning of the commercial paper market. Similarly, the Primary Dealer Credit Facility (PDCF) was established to provide short-term financing to primary dealers at the discount rate (currently 25 bps)

The Fed also introduced measures to alleviate strains in the inter-bank market by encouraged banks to borrow from the Fed through the “discount window” (on March 15th) and making the terms more favorable (on March 17th). Banks have been reluctant to use the discount window because of the stigma (signaling their inability to access funds in the interbank market). Encouragement by the Fed is intended to dispel this notion. In addition, the 50 bps premium on borrowing through the discount window was eliminated, providing banks with a reliable source of short-term funding on favorable terms.

Alleviating strains in markets for asset-backed securities and corporate debt

The Fed has gone well beyond the scope measures introduced during the global financial crisis. Agency commercial mortgage backed securities were added to assets eligible for purchases. The Term Asset-Backed Securities Loan Facility (TALF) was established to support the issuance of asset-backed securities, encompassing student loans, auto loans, and credit card loans as well as small business loans guaranteed by Small Business Administration. The TALF is designed to help ensure that households and small businesses can obtain credit in a timely manner during the difficult period ahead.

Corporate credit conditions have deteriorated significantly over the past few weeks. Effective yields on corporate bonds trading in the secondary market reached levels last seen back during the global financial crisis. Increases were particularly severe in the non-investment grade segment (bonds rated BB and B in Chart 2), as in previous risk-off episodes. For the first time, the Fed will directly support the provision of credit to the corporate sector. The Primary Market Corporate Credit Facility (PMCCF) was established to support the issuance of corporate bonds and loans, along with the Secondary Market Corporate Credit Facility (SMCCF) to provide liquidity in the market for outstanding corporate bonds. 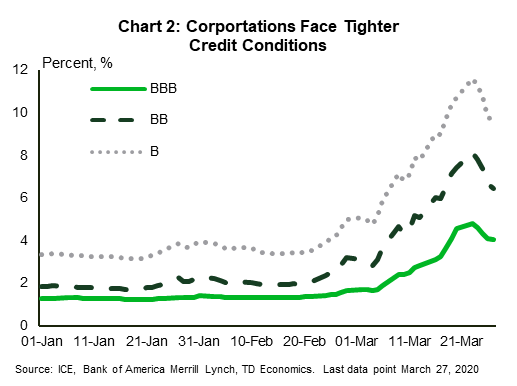 A notable limitation is that non-investment grade debt is not eligible for either facility. This is of particular concern at the current juncture. The debt burden in the non-investment grade segment of the market is at a record-high. Moreover, a high concentration of the investment-grade segment is rated just one rung above (BBB- by S&P and Fitch; Baa3 by Moody’s). Downgrades expected over the next few months will likely result in many of those corporations losing their investment status. Investment grade bond issuance has been brisk over the past few weeks, but non-investment grade issuance has come to a standstill. The combined impact of credit migration and widening spreads could accentuate a downturn in the credit cycle beyond what was experienced during the global financial crisis.

Corporate bond portfolios held in the form of exchange traded funds (ETFs) are eligible for the SMCCF. This will provide a needed source of liquidity. Record redemptions from ETF corporate bond funds over the past few weeks have resulted in significant deviations between share prices and the market value of the underlying assets. The Money Market Mutual Fund Liquidity Facility (MMLF) was established to assist money market funds in meeting large redemptions.

After cutting the fed funds rate by 150 bps in two unscheduled FOMC statements in just over a week, the Fed indicated that it would “use its full range of tools to support the flow of credit to households and businesses”. Indeed, it has. The broad range of measures introduced are beyond what most would have imaged just a few weeks ago. While it is too early to draw conclusions on how long it will take for the new measures will alleviate strains in critical financial markets, one can certainly say that the Fed has taken bold steps and it well equipped to “do whatever it takes”. The Fed will be expected to play a much more active role in maintaining the stability of the financial system through the difficult times ahead. Gone are the days when monetary policy discussions centered on the expected path of the fed funds rate. Gone are the days when the financial stability role of central banks was limited to acting as lender of last resort to commercial banks.