On the data front, UK’s consumer price inflation slowed to 1.5% on a yearly basis in March, driven by fall in fuel, clothing prices and marking its lowest level since December 2019. In the previous month, inflation had recorded a level of 1.7%. Moreover, the DCLG house price index climbed 1.1% on an annual basis in February, undershooting market consensus for a rise of 2.2% and compared to a revised rise of 1.5% in the earlier month. Meanwhile, the nation’s seasonally adjusted output producer price index fell 0.2% on a monthly basis in March, less than market consensus for a fall of 0.4% and compared to a revised drop of 0.2% in the prior month. Additionally, the retail price index rose 2.6% on an annual basis in March, more than market forecast for a rise of 2.3%. In the prior month, the index had recorded a rise of 2.5%.

In the Asian session, at GMT0300, the pair is trading at 1.2332, with the GBP trading slightly lower against the USD from yesterday’s close.

Moving forward, traders would keep a watch on UK’s public sector net borrowing for March, along with the Markit manufacturing and services PMIs, both for April, slated to release in a few hours. Later in the day, the GfK consumer confidence index for April, would keep investors on their toes. 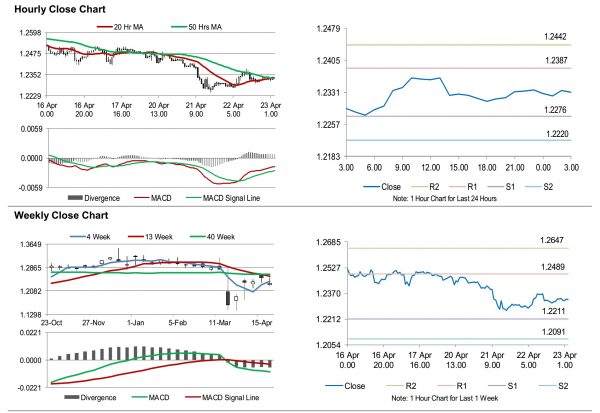