The Chinese National Bureau of Statistics (NBS) will publish April’s manufacturing PMI survey on Thursday at 01:00 GMT and analysts expect a tiny pullback after last month’s incredible rebound that drove the index to pre-outbreak levels. While the slowdown in the data may not downgrade hopes of further improvement in the second quarter, the limited actions taken by the country combined with suffering international markets may keep the country’s overall economic outlook cloudy for now.

In March, the NBS manufacturing PMI bounced above forecasts from a record low of 35.7 to an almost 2 ½-year high of 52, crawling back above the 50 threshold that separates expansion from contraction. 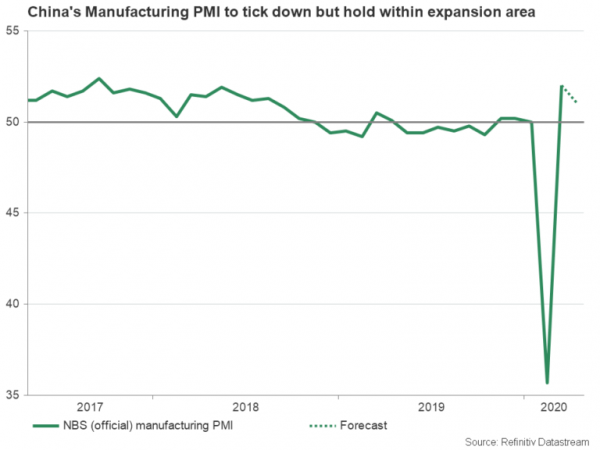 The improvement was a result of factories and constructions resuming operations after the government decided to lift the strict long-month lockdown in the Hubei province after the important reduction in the number of infections. Sub-indices such as new orders and employment expanded as well but undoubtedly activities have not returned to normal levels as the bureau cautioned.

Early in April, Beijing further relaxed restrictions, though not completely, allowing additional mid- and small size businesses to re-open and people to use public transport. Therefore, a reading above 50 could be largely expected on Thursday. However, compared to the previous month, the number may appear weaker at 51 probably because companies have started to face rising costs and narrowing profits that could consequently lead some workers to unemployment or to part-time jobs, pushing wage growth lower – the nation’s official data showed a larger unemployment rate of 5.9% in March.

Falling exports and the lack of external tourism could be another headache since consumers in the US and Europe where the virus continues to expand, remain in isolation, while fears of a recession greater than the one in 2008/2009 are creating concerns about how much business will be done, if household spending remains subdued. The plunge in oil prices is another struggle for the energy industry, with some key state-owned companies likely being slow to reduce costs and capital expenditures to curb losses. However, it should be pointed out that China is the largest net importer of oil in the world and could benefit from the ultra-low prices.

China at a vulnerable position with limited stimulus capacity

To patch the holes the virus made in the economy, the People’s Bank of China has so far cut reserve requirements and funding costs for banks, slashed a set of lending rates such as the 1Y Loan Prime rate, the 7D reverse repo, and the 1Y Medium facility rate, while also encouraged a larger amount of loan supplies to smaller riskier businesses.

On the fiscal front, the response from the central government has been less drastic versus other major economies mainly because of the prolonged delay in the annual meeting of Parliament initially scheduled for March 5. The stats have already revealed a record annual GDP contraction of 6.8% in the first quarter, but lawmakers have yet to set a new date for the National People’s Congress, increasing worries about whether large scale measures will be delivered on time to avoid a second negative quarter. 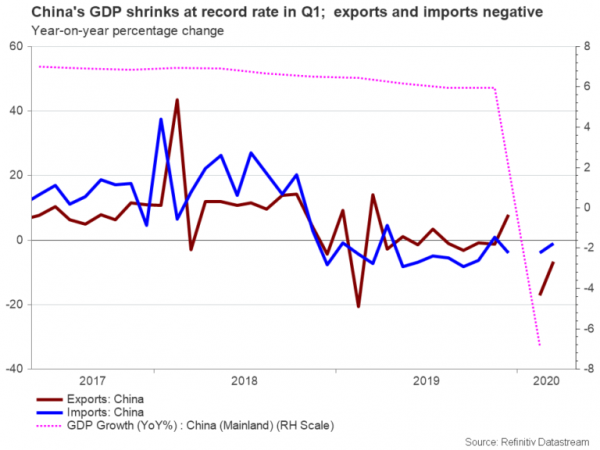 Still, the certain thing is that the decision of signing a massive stimulus package will not be an easy one to take. The global financial crisis left the economy with a supersized debt burden (total of household, corporate and government debt) partially because of the 4 trillion-yuan fiscal stimulus and the surge in bank lending. Hence another similar action could add to the total domestic debt of around 300% of GDP instead of squeezing it, simultaneously driving the budget deficit way above the 3.0% target of 2020 and the already elevated inflation to fresh highs.

Hence the conclusion is that the virus found China at a vulnerable position and with a limited capacity to launch a gigantic stimulus package. The economic outlook is turning even uglier if someone considers that the trade war with the US is not over yet but in a pause mode until the virus issue is contained. Still, with the sides blaming each other for the coronavirus spread, it remains to be seen if trade talks will resume within a friendly atmosphere.

Turning back to the data, any reading above 50 could keep some floor below the currencies that are sensitive to Chinese figures such as the Australian and the New Zealand dollars.

Looking at AUD/USD, which is in a clear uptrend since March 18, an upbeat PMI report on Thursday may help the pair to claim the nearby resistance of 0.6535 and stretch towards the 0.6600 level. A bullish cross is in progress between the 20- and 50-day simple moving averages (SMAs), increasing the odds of a stronger uptrend.

On the other hand, a steep downfall to 0.6443 could be charted if the Manufacturing PMI pulls back below 50, reflecting a contracting industry. Slighty lower, the 0.6400-0.6385 area may also attract attention. Yet, only a sharp decline below 0.6252 would officially violate the market’s upward pattern.