Tomorrow Wednesday, during the Asian session (02:00, GMT) we get from New Zealand RBNZ’s interest rate decision. The bank is expected to remain on hold at +0.25% and currently NZD OIS imply a probability of 86.66% for such a scenario. Should the bank remain on hold as expected, the market’s attention could turn to the accompanying statement and the bank may maintain a supportive tone for the economy. We expect the bank’s forward guidance to be of the essence for the Kiwi’s direction and should the bank imply that it will maintain rates unchanged for the next 12months, we could see NZD strengthening. Given that New Zealand’s economy is reopening faster than others, we could also see the bank mentioning an expansion of its QE program, while should there be any economic forecasts from the bank, we expect them to be adverse. Please note that a press conference is to follow, which could maintain volatility for NZD pairs. NZD/USD dropped yesterday retreating below the 0.6110 (R1) support line, now turned to resistance. Despite the drop, we tend to maintain a bullish bias for the pair and for it to change we would require a clear breaking of the upward trendline incepted since the 3rd of April. Should the pair’s long positions be favored by the market, we could see NZD/USD breaking above the 0.6110 (R1) resistance line and aim for the 0.6180 (R2) resistance level. Should the pair come under the selling interest of the market, we could see it breaking the 0.6000 (S1) support line and aim for the 0.5925 (S2) support level.

The USD strengthened against a number of its counterparts yesterday and during today’s Asian session, as worries for a second wave of coronavirus infections intensified. Worries that a second wave of infections could overshadow the reopening of the global economy, tended to increase safe haven demand for the greenback. Headlines about new infections of COVID-19 being reported in China, South Korea and Germany as lockdown measures ease in various parts of the world increasing uncertainty in the markets. Also, the USD found support as US yields rose yesterday, as Fed officials played down the possibility of the Fed lowering rates to negative levels. Atlanta Fed president Bostic stated that he is “not a big fan” of negative interest rates and that negative rates are “among the weaker tools in the toolkit”. We maintain the view that the reopening of the economy is to be a bumpy ride with some setbacks being in the cards, and should the current uncertainty rise further we could see the USD gaining additional support. AUD/USD dropped yesterday, breaking the 0.6490 (R1) support line, now turned to resistance. As the pair was able to break the upward trendline and given the heavy bearish disposition presented by the pair yesterday, we switch our bullish outlook in favor of a sideways scenario. Yet the bearish direction could be valid only as long as the pair remains under the downward trendline instigated during yesterday’s early European session. Should the bears retain control over the pair’s direction, we could see it braking the 0.6385 (S1) support line, which contained the pair’s drop on the 4th and 7th of the month and start aiming for for the 0.6280 (S2) support barrier, last time tested on the 20th of the month, yet not broken.

Today, during the American session, we get from the US the headline and core CPI rates for April, while just before the Asian session starts, we get from the US the API weekly crude oil inventories figure for the week ended 8th of May. During tomorrow’s Asian session, we get Japan’s current account balance for March, while from Australia we get the consumer sentiment for May, as well as the wage price index for Q1. As for speakers, please note that BoE members Haldane and Broadbent, Minneapolis Fed President Kashkari plus St. Louis Fed President Bullard, Fed’s Vice Chair Quarles, Philadelphia Fed President Harker and last but not least, Cleveland Fed President Mester are scheduled to speak. 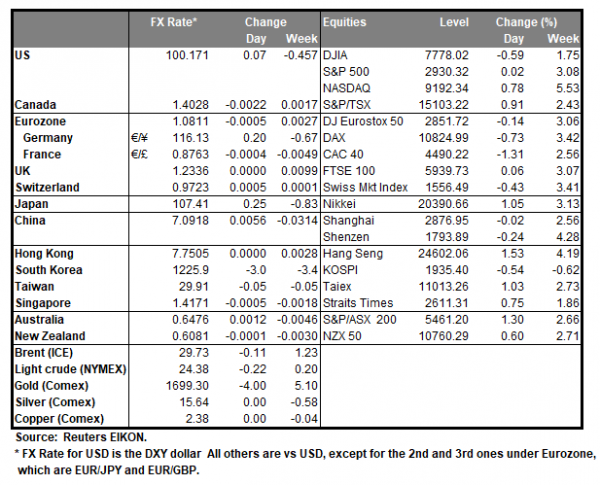 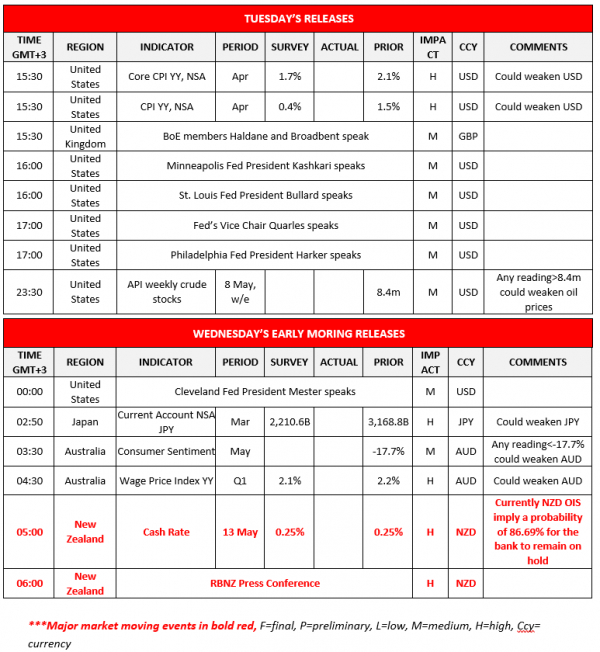 US Dollar Falls As US Coronavirus Cases Jump By 62,000