The Eurozone’s flash PMI readings for the month of May will hit the markets on Friday at 08:00 GMT, likely showing a reviving business sector as most member states moved forward with their re-opening plans. The data are expected to contribute to the bullish atmosphere the German-Franco deal for a virus relief fund created for the euro this week, exposing the currency to fresh buying pressure. In the same day, the ECB meeting minutes could clarify if there is any willingness for more monetary stimulus.

The lockdown measures squeezed business indicators to historic lows the past two months and set the stage for an imminent global recession, but in the EU’s case, investors have one more reason to worry about and that is a divergent political landscape.

With the European central bank out of bullets, EU leaders are seeking ways to raise funds to survive the covid-19 crisis. However, what was a more straightforward procedure in other countries appeared a struggle for the euro bloc as the idea of a common debt instrument aimed at the countries hardest hit by the virus, mainly in the south, found some strong resistance from key member states in the north. On top of that, the recent decision by Germany’s constitutional court that questions the legality of the Bundesbank’s participation in the ECB’s bond buying programs couldn’t have come at a worse time in undermining the ECB’s independence.

In market terms, the political uncertainty raised fears that failure to secure an appropriate rescue package on time could make any debt defaul difficult to be reversed, eliminating any appetite for the euro. Finally, the 27 member states agreed two weeks ago on a 540 billion euro safety net under the European Mechanism Stability program to take effect on June 1. Still, discussions over a joint recovery package and how this could be distributed remained in the air until the French President and the German Chancellor provided some feeling of hope on Monday, both announcing that a 500 billion fund would be raised by the European Commission on behalf of the whole EU to give grants and not loans mainly to the worst-affected national governments. 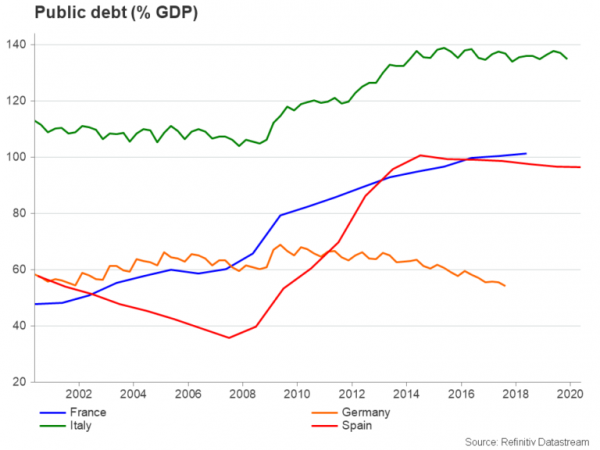 The proposal now needs parliamentary approvals from member states but the procedure may prove highly complicated in wealthier countries such as the Netherlands and Austria which continue to show opposition. Nevertheless, a common response between France and Germany always finds a way to come to the surface and that is making the euro shine this week, pushing it above the key 1.0770 support region and into the 1.0900 zone.

On Friday, initial PMI figures out of the EU could further boost the positive sentiment if the manufacturing PMI bounces from 33.4 to 38 in May, as expected, and the services equivalent more than doubles its previous record low of 12 to 25, both reflecting improving business conditions. Perhaps the numbers cannot exclude another negative quarter in Q2 as long as the measures remain below the 50 threshold that separates growth from contraction, though they could have a positive impact on the markets that are closely following EU news this week. Better business readings could be released in the coming months too should governments allow air travel and more things return to normal, but any upturn should warrant some caution until fears of a second virus wave vanish. 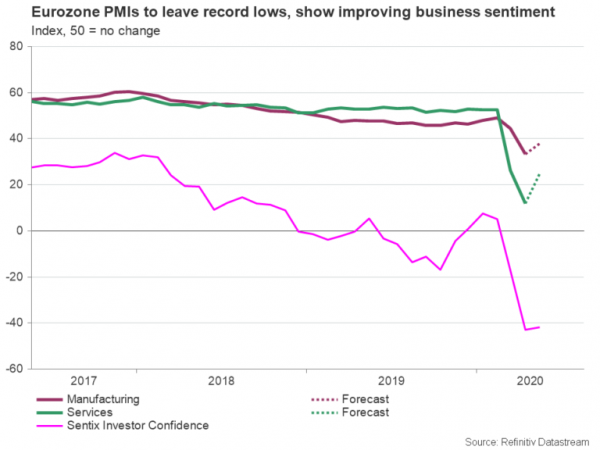 Meanwhile, the ECB minutes from the April’s policy meeting are also on the agenda, with traders waiting more details on why the central bank decided to keep its main tools unchanged in April even as it pledged to inject more liquidity through its newly-introduced pandemic emergency bond purchase program and adjust its composition as much as it is needed.  Hence, any strong comment that reflects a muddy outlook on the EU economy and flags more QE increases in the future could pressure the euro, whereas a softer language may reduce the risk of additional stimulus actions, raising demand for the currency.

Where next for the euro?

From a technical perspective, the short-term bias is currently viewed as positive, with the bulls targeting the 1.0980 resistance level to stretch this week’s rebound towards the 200-day simple moving average (SMA) and the 1.1055 resistance.

On the downside, support to negative corrections could be met between the 1.0830-1.0890 restrictive region. A closing price below the 1.0770 base is expected to generate new selling.