Stock markets were in an optimistic mood heading into the Memorial Day weekend. However, it is likely to be a much more subdued celebration of the unofficial start of summer, with restrictions on gatherings, and millions of Americans newly unemployed. Markets may have taken their cue from global purchasing manager indices for May, which showed that contractions were less severe than in April. But, it seems a stretch to call that good news when PMIs still point to deep contractions in manufacturing and services.

More concrete good news came from German Chancellor Angela Merkel and French President Emmanuel Macro, who announced joint support for a proposal to create a coordinated European fiscal response to the coronavirus pandemic. This 500 billion Euro European Recovery Fund to be distributed as grants and funded by European Commission borrowing. This agreement between the EU’s two largest countries is noteworthy as it takes a small step towards a fiscal union – something that has been missing since the creation of the common currency in 1999 – and a step Germany has up until now been unwilling to take.

Stateside, the latest jobless claims data didn’t provide much cause for optimism. 2.2 million people applied for regular state benefits in the week ended May 16th (on a non-seasonally adjusted basis). However, an increasing number of states have started to report the number of people applying for the Pandemic Unemployed Assistance (PUA) separately, and these claims were also up 2.2 million on the week. PUA was created as part of the CARES Act in late March, and expands eligibility to many workers who don’t typically qualify for regular state benefits.

It took time for states to update their systems to accept and report these claims, so we are likely seeing a backlog being reported now. Including all special program recipients, continuing claims totaled 27 million as of May 2 and have risen by 25 million since early March (Chart 1). Adding rising initial claims in the weeks since, suggests employment will fall further in May.

Meanwhile, more pandemic-stricken April data rolled in this week – this time from the housing market. Housing starts fell 30.2%, and are down 43% versus February. Even though construction was classified as an essential business in most states, homebuilder confidence has plummeted. Builders were clearly reluctant to break ground or apply for new projects with building permits down 25% since February.

Stay-at-home orders also left their mark on the resale market, with a 17.8% drop in existing home sales in April. Unlike other segments of the economy where the declines in activity are records, the drops in the housing market are not quite as bad as what was experienced in the housing market crash (Chart 2). Housing is getting some offsetting support from mortgage rates that fell to all-time lows in April, and have already boosted mortgage applications for purchases, and helped support refinancing activity. 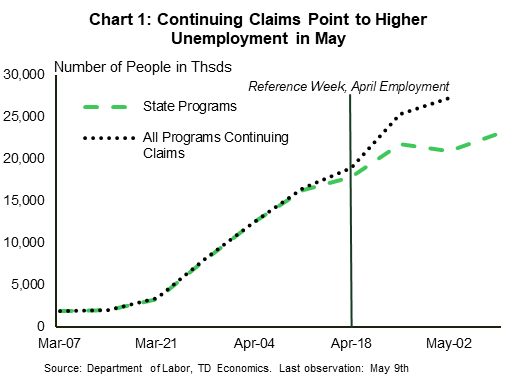 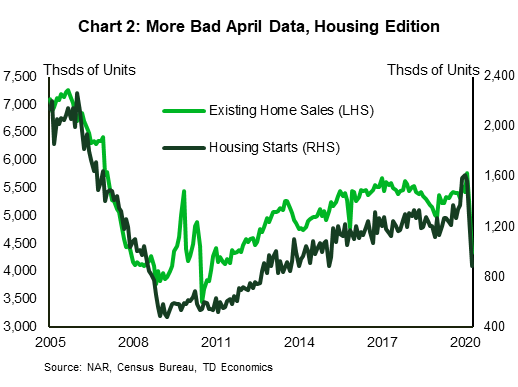 This holiday-shortened week brought another round of historically weak economic data. This didn’t dim the mood in financial markets, with equities and commodities trading higher, supported by hopes that the worst of the impact from the pandemic is in the rear-view mirror. Market optimism faded as the week came to a close amid signs of rising U.S.-China tensions. Still, as of writing, both the TSX and oil prices ended the week higher.

While equity markets have been on the upswing since the end of March, it will likely be another month of so before we see signs of improvement in the economic data. In the meantime, the dire impact of the pandemic was again on display in data releases this week. Hammered by store closures, stay-at-home orders and lower prices, retail sales plunged by 10% in March – the largest decline on record (Chart 1). Online retailers, on the other hand, had a good month, with online sales up 16.3% and market share rising to 4.8% (from 3.6% in February).

In an unusual step, Statistics Canada also released an advanced estimate for April, indicating that retail sales likely decreased by another 15.6% in the month. All told, nearly a quarter of retail sales have been wiped out since February.

The good news is that April will likely mark the lowest point for sales with some indication that spending began to recover toward the end of the month. The bad news is that the bounce-back is unlikely to be robust, with social distancing rules and concerns about virus exposure to continue. This prompted some major retailers to announce permanent store closures this week.

Consumer price inflation, meanwhile, turned negative in April, falling to -0.2% year-on-year (y/y). Plummeting energy prices, led by gasoline (-39.3% y/y) were the main culprit (Chart 2). The other categories seeing the largest price declines were those most heavily-impacted by COVID: traveler accommodation and clothing. Food price inflation, on the other hand, accelerated in the month. Indeed, given that households consumed little of the goods and services that were declining in price and more of the goods where prices were rising, the pullback in measured CPI is of little relief.

The inflation outlook and the path to recovery are riddled with uncertainty. In a speech this week, Bank of Canada Deputy Governor Timothy Lane echoed our view that the pace of recovery will vary considerably by industry. Some industries, such as construction, are expected to bounce-back quickly, while others, like travel, will take a long time to recover. There could also be some permanent post-COVID changes, such as a higher share of e-commerce and prevalence of remote work, which will reshape some industries and their workforce.

One thing is certain: given the unprecedented demand shock, policy makers will need to continue to do whatever it takes to steer the to the economy back to health. Once that milestone is reached, support measures can be slowly removed; however, as we outline in our latest Dollars & Sense, policy rates will be the final tool to be adjusted, and the overnight rate will likely remain at the effective lower bound until 2022. 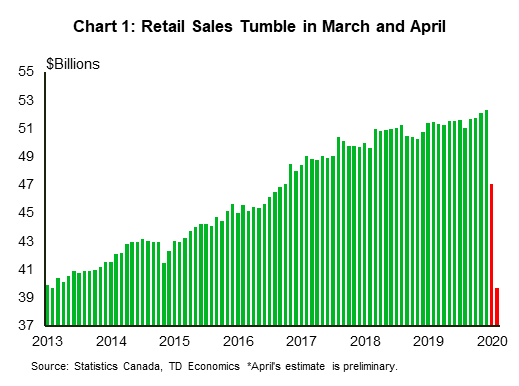 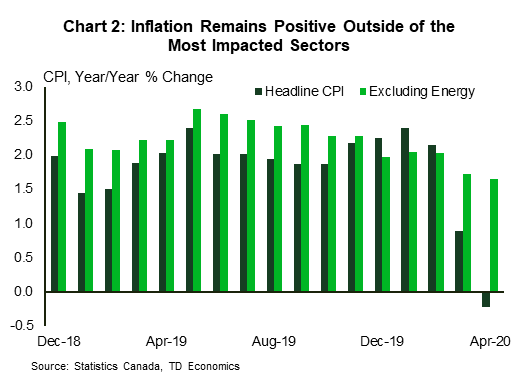 Consumer spending likely plunged again in April, due to voluntary and involuntary social distancing, even as disposable income was boosted by unemployment benefits and stimulus payments; the saving rate appears to have risen sharply. Consumer spending accounts for 68% of GDP, so the April data will be important for Q2 “tracking” estimates. Our forecast puts real spending down 16% (13% nominal), not annualized, from the Q1 average, but there should be some improvement in May and, especially, June as the economy reopens. As with the CPI, weakness in the PCE price index likely extended to the core part as well as energy prices, with weakness in core prices led by travel components such as airfares and hotel rates. 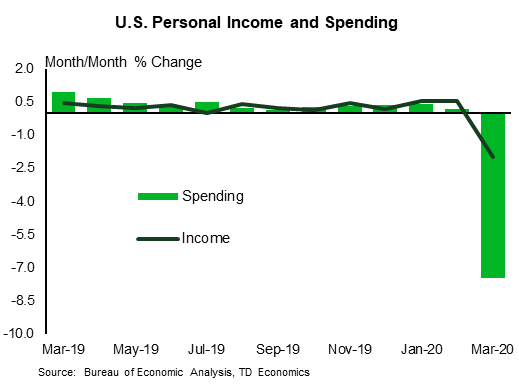 Despite most social distancing occurring only in the latter part of March, the scale of COVID-related shutdowns is likely to cause a sizeable drop in Canadian economic activity in the first quarter. TD’s standard tracking models would suggest a decline of around 5% annualized. However, the service-oriented nature of the pandemic means that the impact is not fully captured in the typical data used to inform our GDP tracking, such as retail sales or international trade. Consistent with Statistics Canada’s nowcast, we expect a decline of roughly 10% annualized. The drop should be driven largely by consumer spending (-13.6%), underpinned by a roughly 25% anticipated drop in services spending. A more modest hit to non-residential business investment is expected (-2.3%) given the evolution of restrictions on activity across the country. Residential investment is expected to be a relative bright spot, with activity ‘only’ flat (0.0%) over the quarter.

For industry-level GDP, TD forecasts a 4.7% m/m decline in March. At first glance, this is far less dire than the early tracking from Statistics Canada but is still 3-4x worse than any month on record. We look for the sharpest contractions across the service sector, with retail trade, accommodation and food services, recreation, and education among the industries which could see double-digit declines, while goods-producing industries should see relatively less impact. In a more normal environment, this type of handoff from Q1 would weigh heavily on second quarter growth as well but given the pessimism already baked into the near-term forecasts, a 4.7% contraction would also introduce some mild upside risk for Q2. 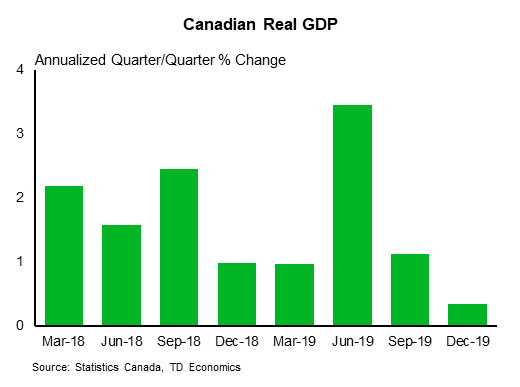 ECB ‘Will Probably Need To Go Even Further’