The USD weakened against a number of its counterparts yesterday and during today’s Asian session, as optimism seemed to characterize the market. Analysts report that the positive mood in the markets may have been turned on, as further easing of the restriction measures may have fueled the optimism about a possible global recovery. On the other hand, please note that the World Health Organization warned about a second peak in areas where COVID 19 is declining, if they ease lockdown measures too soon. However, at the same time, the rising tensions between China and the US continue to pose a threat to global growth, hence the markets may be in the middle of two conflicting tendencies which may increase volatility. Currently, the main beneficiaries of the positive market mood seem to be the commodity currencies which are gaining ground, while at the same time safe havens tent to experience outflows. Given the risks mentioned before though the situation may easily be reversed. As the US and the UK return to work after their holidays and the markets are to reopen, we expect more action after a rather slow Monday. AUD/USD rose and broke the 0.6565 (S1) resistance line, now turned to support. We tend to expect a continuance of the bullish tendencies, should the positive market sentiment continue to characterize the market. If the bulls actually maintain control over AUD/USD, we expect it to distance itself from the 0.6565 (S1) support line and aim if not break the 0.6650 (R1) resistance line. Should the bears take over, we could see AUD/USD once again slipping below the 0.6565 (S1) support line and aim for the 0.6490 (S2) level.

The CAD strengthened against the USD yesterday, as it may have been fueled by the positive market sentiment as well as oil prices inching higher. It should be noted that oil prices resumed their ascent yesterday as expectations about supply cuts and further easing of coronavirus lockdowns strengthened. On the monetary front, Bank of Canada Governor Stephen Poloz stated that the economy would need substantial monetary stimulus during the rebuilding stage of the coronavirus crisis. The BoC governor also stated that the bank’s main concern focuses on the possibility of deflationary pressures emerging and that the bank’s policy framework is flexible enough to allow the inflation rate to climb back to the bank’s target of 2%. Also, despite worries for further indebtedness of the government in its effort to reboot the economy, the governor stated that “getting the economy back onto its growth track … is the surest means of servicing those debts over time”. We expect that CAD traders could be keeping an eye out for oil prices as the oil market seems to be tightening, however Poloz’s appearance before Canada’s Senate could draw some attention once again. USD/CAD dropped yesterday, breaking the 1.3970 (R1) support line, now turned to resistance. We expect the bearish momentum to continue and for our opinion to change we would require USD/CAD to break the downward trendline incepted since the 22nd of May. Should the pair remain under the selling interest of the market, we could see the pair breaking the 1.3865 (S1) support line and aim for the 1.3755 (S2) support level. In a buying momentum, we could see the pair breaking the 1.3970 (R1) line and aim for the 1.4050 (R2) level.

Today during the European session, we get Germany’s GfK consumer sentiment for June, France’s business climate for May as well as UK’s CBI distributive trades also for May. In the American session, we get from the US the consumer confidence for May and the new home sales figure for April. As for speakers please note that ECB’s Philip Lane, Minneapolis Fed President Kashkari and BoC Governor Poloz along with BoC Deputy Governor Wilkins are scheduled to speak today. Please note that this is to be one of the last appearances of Poloz as BoC governor, as he is to leave the position on the 2nd of June and his successor is to be Tiff Macklem. Also note RBNZ’s press conference tomorrow during the Asian session. 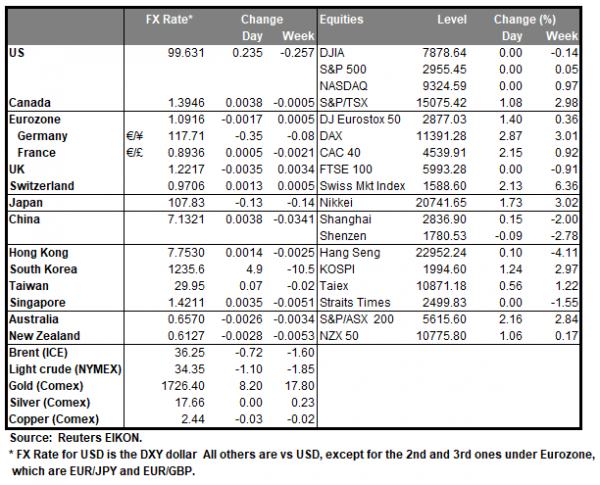 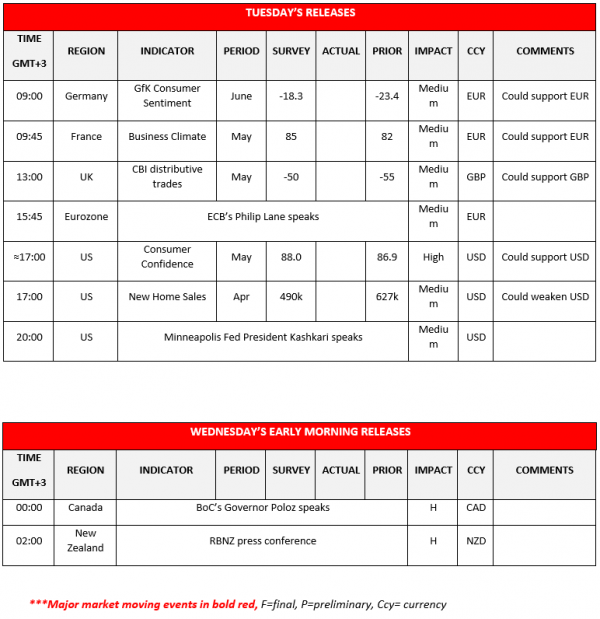