The USD weakened against most of its counterparts as extensive unrest is present in the US after a police officer killed a man in Minneapolis. Despite the market’s immunity to the violence spreading, we tend to maintain some worries for further escalation. Also, Trump’s press conference on Friday about China didn’t seem to deter the markets as stock-markets tended to rebound after a slight drop on Friday. At his speech, the US President stated that the US would withdraw from the WHO and that the special status enjoyed by Hong Kong is to be reversed, as all tariffs and sanctions that apply for Mainland China are to apply for Hong Kong as well, as analyzed in Friday’s report. It should be mentioned though that despite headlines mentioning that the US President announced unprecedented action against China, we consider most of the US actions directed at Hong Kong and to a lesser degree to China as such. Also, the measures remain somewhat vague hence there may be some room for negotiations between the two countries, while other analysts consider that the US President did not implement the harshest measures available. It remains to be seen how fast and how wide, the US President’s words are to transform into actual policies against China. The situation remains tense as China’s response is expected and should the situation escalate further, we could see safe-haven flows present in the markets. For the time being, it should be mentioned that investors seemed to concentrate more on the reopening of the economy and the prospect of recovery. EUR/USD continues to rise and during today’s Asian session broke the 1.1120 (S1) line, now turned to support. We maintain a bullish outlook for the pair as long as it remains above the recently steepened upward trendline incepted, since the 26th of the month. Should the pair find fresh buying orders along its path, we could see it aiming if not breaking the 1.1180 (R1) line. In a selling momentum, we could see the pair breaking the prementioned upward trendline the 1.1120 (S1) line and aim for the 1.1060 (S2) level.

Tomorrow during the late Asian session, we get RBA’s interest rate decision and the bank is widely expected to remain on hold at +0.25%. It should be noted that AUD OIS imply a probability of 96.95% for the bank remaining on hold, while at the same time its implied that the market expects rates to remain unchanged at the same level until the end of the year. Any further monetary easing could be implemented through the bank’s QE program, yet probably unlikely at this stage. We expect RBA to maintain its expansionary monetary policies until progress is made towards full employment and the bank is confident on inflation. The event could have a bullish effect on the AUD, should some optimism escape the bank’s accompanying statement. AUD/USD continued its ascent breaking the 0.6650 (S1) resistance line, now turned to support. We maintain a bullish outlook for the pair as long as it remains above the upward trendline incepted since the 15th of May. If the bulls maintain control, AUD/USD could break the 0.6750 (R1) resistance line and aim for the 0.6840 (R2) level. If the bears prevail, the pair could break the prementioned upward trendline, the 0.6650 (S1) support line and aim for the 0.6565 (S2) level.

Today we get the final manufacturing PMI’s for May of Germany, the UK and Canada, yet the most interest is expected to be with the release of the US ISM manufacturing PMI for the same month. 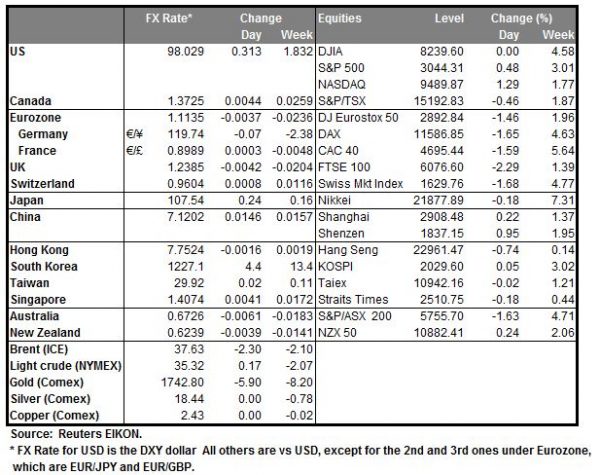 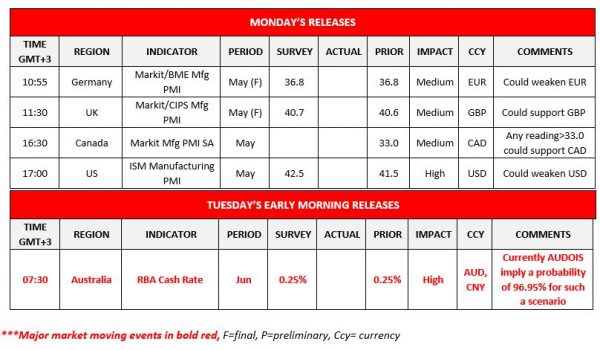