The USD continued to tumble yesterday, as markets tended to eye a recovery of the US economy and other parts of the world, causing safe-haven outflows for the greenback. It was characteristic that commodity currencies tended to be the main beneficiaries, while JPY may have experienced more safe-haven outflows than the USD. Analysts tend to note the general weakness of the USD, and despite agreeing, we also start to worry that the bears may have overdone it. Protests and unrest continue in the US and could threaten the recovery of the US economy, if they blow out of proportion. Demonstrators yesterday, ignored the curfew imposed and continued their protests despite Trump’s threat to use the military against them. Markets seem to remain immune to violence currently and should market optimism continue to fuel the market, we could see USD losing ground while commodity currencies could strengthen further.

AUD/USD continued its rise as expected, breaking the 0.6840 (S1) line, now turned to support and is testing 0.6940 (R1). We maintain a bullish outlook for the pair as long as it remains above the upward trendline, steepened since the 29th of May. Please note that the RSI indicator below our 4-hour chart remains above the reading of 70, underscoring the dominance of the bulls, yet at the same time may imply that the pair’s long position may be overcrowded. Should the pair find fresh buying orders along its path, we could see it breaking the 0.6940 (R1) line and aim, if not break the 0.7025 (R2) level. Should the pair come under the selling interest of the market, we could see it breaking the 0.6840 (S1) line and aim for the 0.6750 (S2) level.

Today in the American session (14:00, GMT), we get BoC’s interest rate decision, and the bank is widely expected to remain on hold at +0.25%. Currently CAD OIS imply a probability of 95.22% for the bank to remain on hold as mentioned. Should the bank maintain rates unchanged as expected, we could see the market’s attention turning to the accompanying statement and the incoming governor Tiff Maclem, as Stefan Poloz’s term expired. The bank is expected to maintain a supportive tone for the Canadian economy especially after the GDP rate showed a contraction of -8.2% qoq (annualized), while the inflation rate also tended to disappoint, adding pressure on the BoC to act. We expect though that the bank may refrain from expanding its QE program at the current stage, yet such an expansion should not be excluded totally as a possibility. Should the bank expand its QE program we could see the Loonie slipping, while if some slight optimism derives from the event, we could see the CAD gaining ground. On the other hand, CAD traders may also gain further confidence after oil prices rose further yesterday for a fourth consecutive day. USD/CAD dropped breaking, with some difficulty the 1.3520 (R1) support line, now turned to resistance. We maintain a bearish outlook for the pair as the downward trendline incepted since the 22nd of May continues to guide it. Please note that the RSI indicator under our 4-hour chart is below 30, highlighting the supremacy of the bears, yet may also imply that short position is overcrowded. If the bears maintain control, USD/CAD could break the 1.3425 (S1) line and aim for the 1.3342 (R2) level. If the bulls prevail, the pair could break the 1.3520 (R1) line and aim for the 1.3620 (S2) level.

Today during the European session, we get the Swiss GDP rate for Q1, Turkey’s CPI rates for May, France’s Germany’s and the UK’s final PMI readings, Germany’s employment data for May, and Eurozone’s producer prices growth rate and the unemployment rate for April. In the American session we get from the US the ADP employment figure for May, the ISM non-Manufacturing PMI for May, the factory orders for April and the EIA crude oil inventories figure. In tomorrow’s Asian session from Australia, we get the retail sales growth rate as well as the international trade data, both for April. 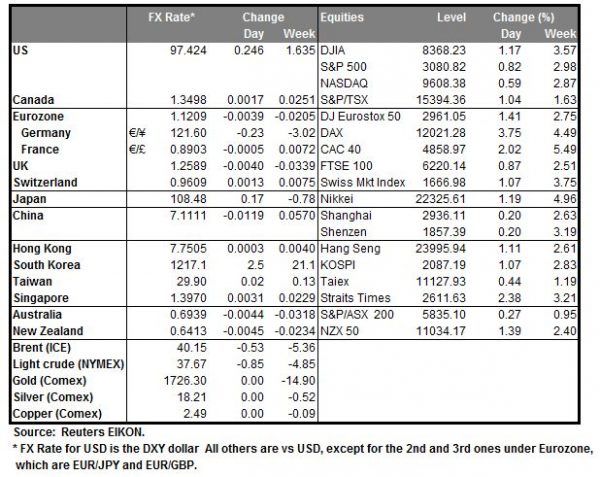 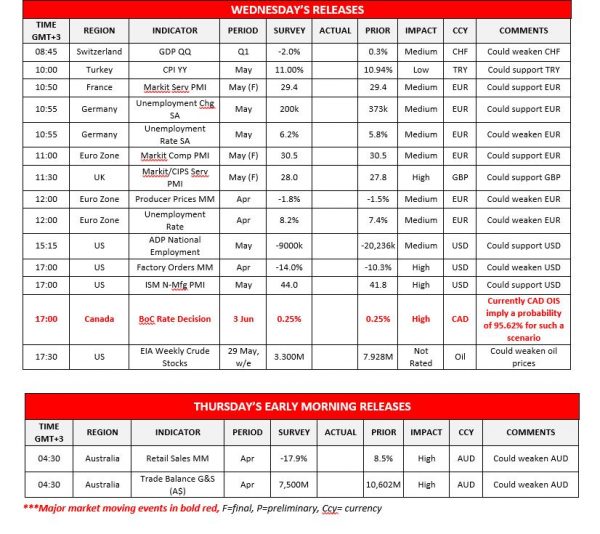