The Weekly Bottom Line: Positive Signs of a Rebound as Infections Rise

U.S. – Positive Signs of a Rebound as Infections Rise

Market sentiment is in a tug of war between the rise in coronavirus infections globally and stimulus measures from central banks. This week belief in stimulus seems to be winning out, with equity markets up on the week. In the U.S., positive economic data also buoyed the mood, even as infection rates rose in several states. The fight against the virus is certainly not over. The U.S. posted its largest one-day increase in cases since early May on Thursday, while Beijing is back under restrictions with a new outbreak of cases (Chart 1).
In other central bank action, the Bank of England announced it will boost its bond-buying program and the Bank of Japan increased its pandemic lending program. Stateside, Chair Powell gave his semi-annual testimony to Congress this week, where he struck a cautious tone. He pointed out that the biggest factor weighing on the outlook was uncertainty about the path of the virus. “Until the public is confident that the disease is contained, a full recovery is unlikely.”

He urged lawmakers not to allow the support Washington is providing – namely expanded unemployment benefits and forgivable loans to small businesses – to end too abruptly. We discussed this in a report earlier this week. The support from Washington has helped to bolster consumer spending in recent weeks, as demonstrated by the impressive bounce back in retail sales in May (Chart 2). Retails sales, including food services, was back up to 92% of February’s level in May, despite an unemployment rate of 13.3%.

There were also signs of a rebound in manufacturing sentiment. Both the Empire State and Philly Fed manufacturing indices recovered strongly in June, with current conditions at the 50-mark in the case of the former and above (53.3) in the latter. Both were quite close to their pre-pandemic levels. Expectations for six months from now were even more optimistic.

Still, the economy is nowhere near full health. Fewer people applied for jobless benefits in the latest week, but the level of claims is still at an unthinkably high level. As of the end of May, 29 million people were still collecting benefits including Pandemic Unemployment Assistance recipients, underscoring Powell’s point about the long road the economy must travel as it recovers.

This theme is echoed in our latest forecast, “Long Walk Home“. We have upgraded our real GDP forecast over the next two quarters, reflecting the strong spending momentum in the high-frequency data. At the same time, we have raised our unemployment rate forecast over the medium term. This reflects the reality that jobs in certain sectors are not coming back any time soon. And while there will be new opportunities in other areas, it will not be easy or quick for businesses and employees to make these shifts. 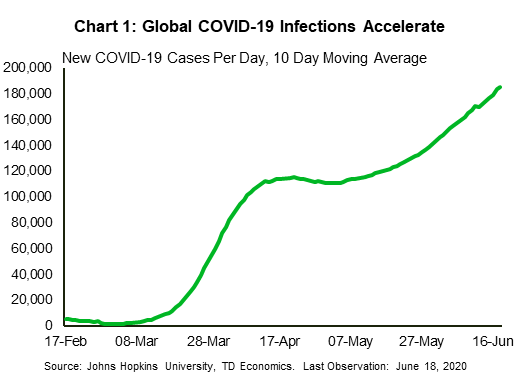 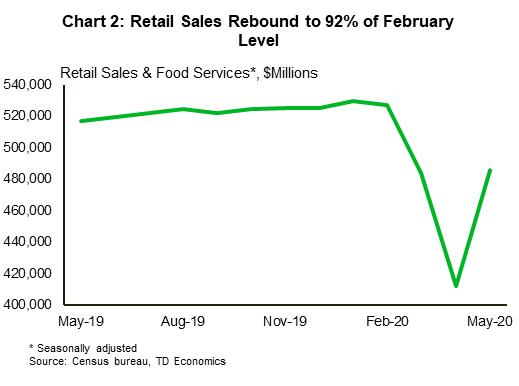 After last week’s sharp correction, equities managed to recover some lost ground. Indeed, markets were on track to end the week in the black, thanks mostly to gains made early in the week. The TSX was also higher as of writing on Friday, as energy shares got a boost from a renewed commitment from some OPEC+ members to honour previously pledged production cuts.

This week also brought a generous data buffet for investors to chew on (Chart 1). Given the rapid expansion of real-time economic data since the onset of the virus, the manufacturing and retail trade reports for April felt somewhat dated. Nonetheless, they help fine-tune our assessment of the extent of damage caused by COVID-19, as both the virus, and lockdown measures taken to combat it, were at their peaks during the month. Retail sales volumes retrenched by a gruesome 25.2% m/m in April as almost all retail stores were shutdown. This was a larger decline than the -15.6% m/m drop reported earlier by Statistics Canada in their newly-produced advanced estimate.

Playing a rousing game of “anything you can do, I can do worse”, manufacturing volumes tumbled even more severely (-26.0% m/m) in April, dwarfing the declines observed during the height of the global financial crisis. Sales volumes were down in every category, paced by an unbelievable 77.3% monthly collapse in transportation equipment as auto production was shut down.

No doubt April was a low-point for the Canadian economy and data point to an upturn in May. For instance, high -frequency anonymous TD consumer spending data points to a marked improvement in the month. This is consistent with Statistics Canada’s advance estimate, released today, pointing to a 19.1% rise in retail sales in the month. Also, home sales bounced 56.9% off April’s record low. Adding to the improved tone, the IHS Markit manufacturing PMI (released earlier in the month) also improved, signaling a better (or less bad) performance for manufacturers.

Despite turning up last month, these data also highlight that the road back to recovery will be long. For starters, TD’s spending data was still down year-on-year in May, while home sales remained at multi-decade lows and the manufacturing PMI remains in contractionary territory.

The impacts of the virus are also showing up in inflation trends. Consumer prices were lower month-on-month in nearly every major category in May, except for transportation prices, which bounced higher after two months of outsized energy price declines. Meanwhile, all three of the Bank of Canada’s measures of core inflation eased, with their average slowing to its softest pace since 2017 (Chart 2). These measures are unlikely to return to target until sometime next year. Combined with new Bank of Canada governor Tiff Macklem testimony this week re-iterating the Bank’s commitment to purchase government bonds until the recovery is well underway, rest assured that monetary policy will remain extremely accommodative for some time to come. 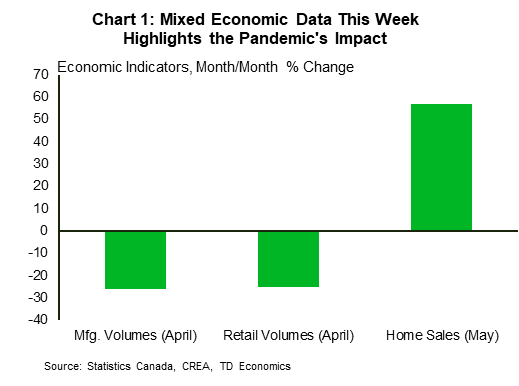 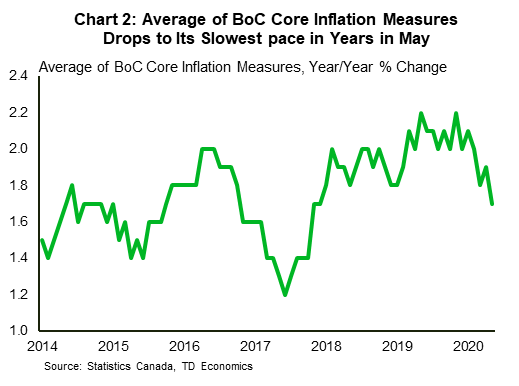 The surge in retail sales in May is likely to be mirrored in the broader consumer spending series. We see good reasons not to extrapolate from the strength, however. Employment is starting to recover, but support from stimulus payments is fading; income likely plunged in May, even with the wage part up. Also, some states may have to pause their reopening due to new COVID cases. PCE inflation does not appear to have been as weak on a m/m basis in May as it was in March and April, but the y/y readings will likely be down again. We estimate a 0.9% y/y pace for core prices, down from 1.0% y/y in April, 1.7% in March and 1.8% in February. 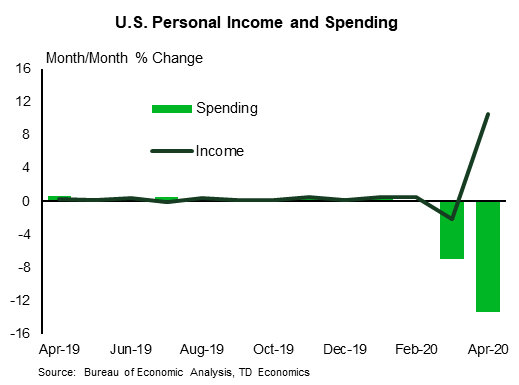