Emerging from Lockdown: A V-Shaped Recovery or False Optimism?

Looking at how risk assets have been performing over the past three months, it’s hard to tell there’s a global pandemic going on. To put it into more context, if someone had been living on a desert island during this time, they would be forgiven for thinking that the world is in the midst of an economic boom when glancing at stock markets. But although there’s been no shortage of crisis response measures since the coronavirus outbreak erupted, how rational has the market behaviour been given the scale of uncertainty that lies ahead?

There can be no doubt that the global economy is in dire straits. The coronavirus pandemic has produced a shock on the scale not seen since at least the second world war, forcing entire populations to go into quarantine and bringing economic activity to a halt. However, the unprecedented shutdowns brought about unprecedented intervention by governments and central banks, submerging markets in a flood of liquidity.

The abundance of liquidity is seen as the primary factor behind the incredible but dubious rally in global equities, particularly in the United States.  The S&P 500 is up more than 40% from its March lows, while the Nasdaq Composite is back to making record highs. When considering how inflated stock prices on Wall Street were prior to the virus turmoil, current valuations look even more questionable, especially as the pandemic is far from subsiding. 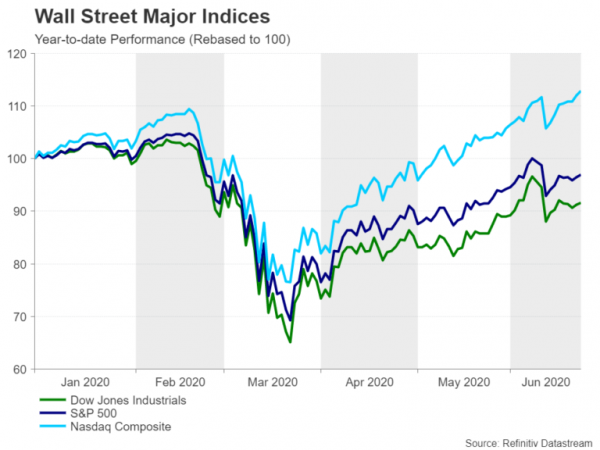 Fed has the markets’ back

As far as cash-rich investors are concerned, however, they believe the Federal Reserve has their back whatever happens. Afterall, the Fed has done little to dissuade markets from thinking otherwise. In addition, the latest economic data provide good reason to expect a full recovery from this crisis, creating the perfect ingredients for a strong risk rally. But it’s not just risk assets such as stocks that have been caught up in this ‘irrational exuberance’. Currencies have also become a tool of the risk trade with even the euro tracking risk sentiment more closely than Eurozone fundamentals.

As communities around the world find themselves free to leave their homes after having spent weeks in self-isolation, the sense of optimism is hard to deny. In Europe, where the lockdown appears to have succeeded in bringing down the infection rate substantially, that optimism is well founded. European countries, including the United Kingdom, have now reopened most parts of their economies and the latest PMI indicators suggest they are either on the verge or have already started to grow again. 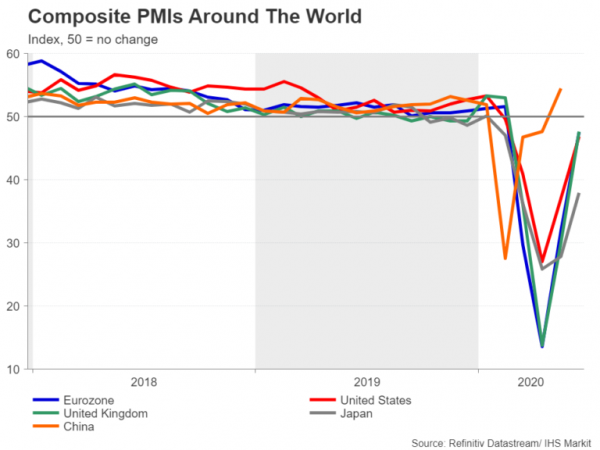 Is the recovery sustainable?

The recovery in the United States appears to be even more dynamic. And with governments hinting they have no appetite to re-impose nationwide lockdowns should virus cases spiral out of control again, the risk-on mood seems justified. After all, this recession was caused by self-induced economic hibernation, and with governments better prepared to limit and contain another outbreak, investors are probably right to assume that the worst is over. The trouble is, does that necessarily mean that it will be business as usual in a few months’ time?

The answer to that is probably not! The upbeat data will most likely continue rolling in over the next couple of months as more virus restrictions are lifted. But what happens after that? Without an effective treatment or a vaccine for COVID-19, businesses such as retailers, restaurants, cinemas, leisure centres and hotels will not be able to operate at anywhere near full capacity for the foreseeable future and may not even be able to breakeven if they have to abide with social distancing guidelines. Meanwhile, sectors of the economy such as air travel and tourism could face complete collapse if safety measures stay in place permanently.

For now, many workers in these industries are being protected by government furlough schemes. But what happens when those programmes expire? Governments cannot afford to subsidize a large chunk of private sector payrolls indefinitely even if central banks are there to swallow the record amounts of debt issuance.

The longer the pandemic lasts, the higher the chances of structural unemployment becoming a long-term problem in major economies and this can only be bad news for consumption. A good indicator for the diminishing outlook for global demand is oil. Prices for oil continued to slide well after stock markets began to recover as the commodity failed to join in the stimulus euphoria. They’ve since posted a respectable recovery, with the help of OPEC-led output cuts, but unlike equities, they remain down by about a third in the year-to-date, signalling the still weak prospects for demand. 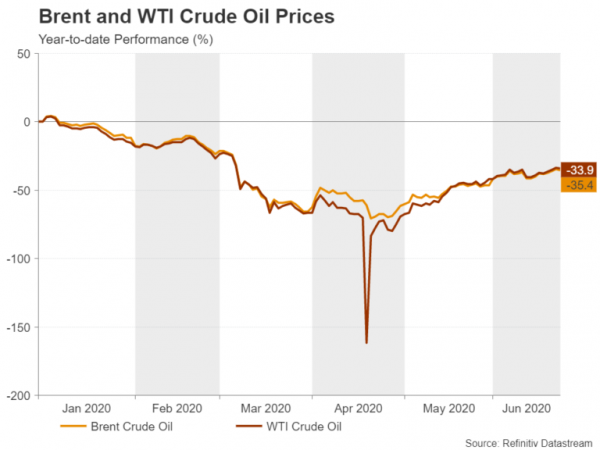 US at bigger risk from second wave

What is perhaps more striking about this misguided sense of optimism in the markets is that not even worrying signs of a resurgence in virus cases in the US appears to be causing much concern among investors. With many American states having relaxed their lockdown rules too early and now seeing a flare-up in both new cases and hospitalizations, it may only be a matter of time before shutdowns are re-imposed in the worst hit regions. On top of that, the US is also dealing with civil unrest, looming presidential elections and souring relations with China. 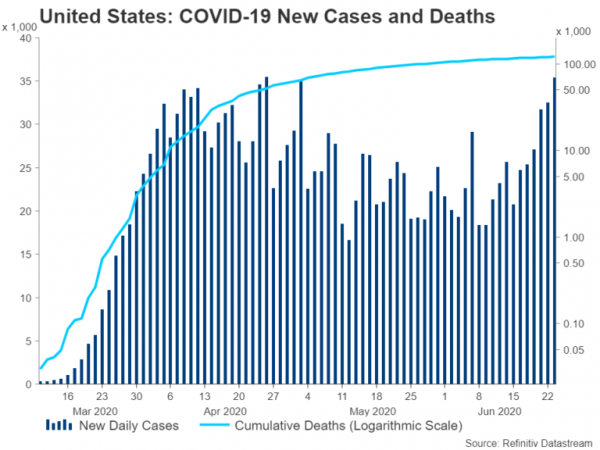 None of this bodes well for Wall Street and each of those threats could burst the stock market bubble at any point. What’s not so clear, however, is how the US dollar would react if stocks came crashing down. Would it hold on to its recently revived safe-haven status and soar again, or would it finally be dethroned as king of the currencies?

If a second wave were to strike the US but other nations coped better by curbing any spikes in new infections, the dollar would be at serious risk of seeing its safe-haven appeal diminish. It’s already losing out to gold when it comes to risk-off flows on the back of the second wave fears. Gold just reached a 7½-year high amid a host of mounting risks stemming from geopolitical tensions, the trade war, Brexit, and of course, the pandemic. 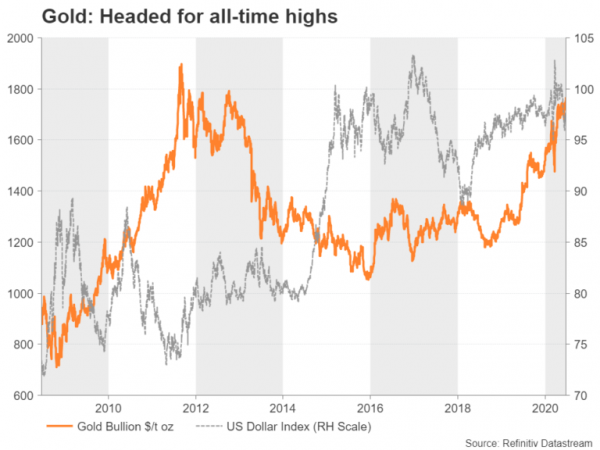 It’s also worth bearing in mind that after the ‘dash for cash’ episode in March and the subsequent central bank action to boost dollar liquidity, future funding squeezes are unlikely to be quite as acute. Hence, the dollar is likely past its peak and could be facing a lose-lose situation where it falls as the global economy recovers from the pandemic and it falls if a second wave mainly afflicts the US.

Euro could be one to watch

In such a scenario, the euro would be the biggest winner against a wavering dollar, although the euro’s own bullish prospects hang in the balance as the European Union has yet to agree on a virus rescue package. The US could also be in line for an additional fiscal stimulus boost from Congress. However, stocks would again be the main beneficiary of another fiscal package, while the dollar would become more sensitive to the relative strength in the economic data if there was evidence that fears of a second outbreak are starting to hurt the recovery. 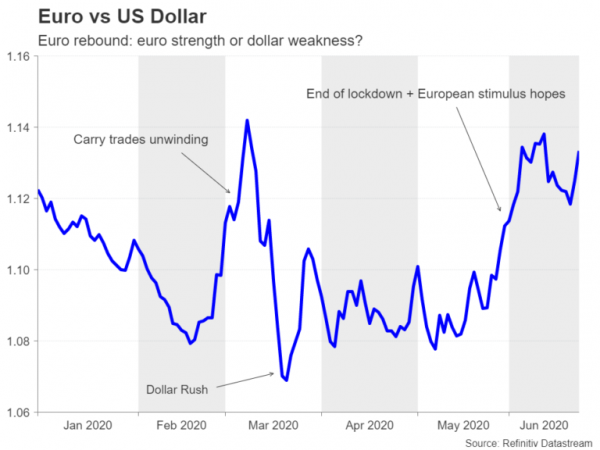 All in all, despite the encouraging signs of economic life, it is too soon to start ignoring the virus news as the unpredictable nature of this disease means the outlook has never been so uncertain. Even if the world is able to avoid a major re-escalation in virus cases, market price action suggests investors have yet to fully acknowledge the new norm that is fast becoming reality and this begs the question, what happens when they finally do?