For currency traders with an appetite for action, look no further than the Australian dollar. AUD/USD has been on a hyper-coaster ride in the first half of 2020. The pair was abysmal in Q1, falling 13.1 percent. Yet the plucky Aussie has clawed its way back and managed to recover almost all of these losses in the second quarter, climbing 12.0 percent. AUD/USD is flirting with the symbolic 70-level, after testing this level on Thursday for the first time since mid-June.

For traders and investors trying to make sense of the Aussie’s adventures, a good place to seek guidance is Australia’s central bank. As expected, the RBA maintained the cash rate at 0.25%, where it has been pegged since March. At that time, the Fed and other major central banks slashed rates in a coordinated move, in order to restore stability to the staggering financial markets in the wake of the Covid-19 pandemic. The rate statement at this week’s policy meeting was guardedly optimistic, with policymakers stating that the economy had stabilized and that the downturn had been less severe than expected. The bank noted that retail sales had improved, but acknowledged that the uncertainty among consumers and businesses could impede the economy’s recovery. As far as monetary policy, the RBA said it would maintain its accommodative policy as long as needed and had no plans to raise rates.

So what’s the bottom line for investors and traders? The RBA appears content with a ‘hands-off’ policy – it is monitoring events carefully, but has no plans to lower rates, even with the recent jump in the value of the Australian dollar. That would leave the Aussie’s fortunes tied to geopolitical events, such as the coronavirus pandemic, the health of China’s economy (Australia’s number one trading partner) or the recent lockdown between the state of Victoria and New South Wales. Based on the Aussie’s performance so far in 2020, it’s advisable for traders to keep their roller-coaster harnesses fastened tight until further notice. 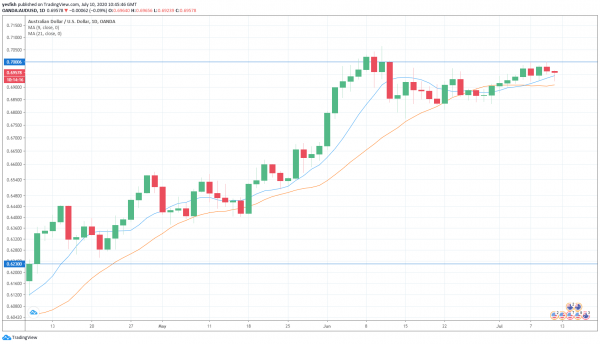 AUD/USD is almost unchanged on Friday. The pair is currently trading at 0.6957, down 0.09% on the day. AUD/USD dipped lower in the Asian session but has recovered most of these losses in European trade.

The 0.7000 level is a key resistance level, which was tested earlier this week. This line remains under pressure.