Positive indicators continue to pile up for the early days of the recovery but that’s not to say the economic backdrop is anywhere close to strong.

The latest bright spot is the almost 1 million increase in employment in June. The Canadian manufacturing sales report for May next week is expected to show a relatively modest (given the size of earlier declines) 6.5% increase in May – broadly in line with Statistics Canada’s 6.2% advance estimate, with auto sales bouncing back from near-zero levels in April. But the gain in manufacturing in June could well be larger given the improvement in closely-watched PMI surveys and a 13% rise in hours worked in the sector during the month.

These early bounces aside, we expect the economy to follow a gradual rather than sharp recovery. The 2-month drop in economic activity in March and April was entirely unprecedented. And even the sizeable gain in June employment left the job count down by 1.8 million from February.

Macklem and the BoC still likely tracking a gradual recovery

Early indications that the initial rebound in May and June was stronger-than-expected does leave Q2 GDP growth tracking closer to the top-end of the -10% to -20% range the Bank of Canada estimated in early June – but the outlook for the economic recovery nevertheless remains exceptionally cloudy.

Central Bank Governor Macklem’s first Monetary Policy Report – coming next week – is expected to provide a “central scenario” outlook. This comes after policymakers opted to show just a range of (all-bad) future possibilities in the April report. The BoC’s Q2 Business Outlook Survey this past Monday highlighted some of the challenges expected once the initial rebound dims. Businesses were clearly concerned that demand would be slow to recover, and cut investment and hiring plans in response. And some form of containment measures are likely to remain for the foreseeable future.

Our own current projection has GDP still 5.2% below its year-ago level in Q4 2020, and not fully recovered to pre-shock levels until beyond 2021. That demand shortfall will keep monetary policymakers focused on downside more than upside risks to inflation, and should reinforce expectations the central bank will continue to provide as much liquidity as necessary to ensure interest rates remain low and financial markets continue to function well. On that front, continued narrowing in credit spreads from April highs should provide reassurance that exceptional monetary policy interventions have been working (and also argue that additional significant measures are not needed at this point.) 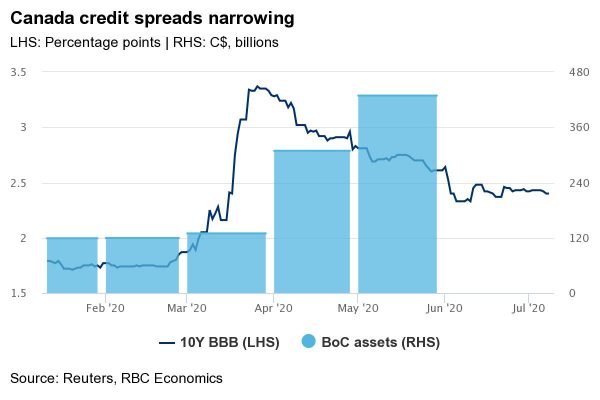 US data also bouncing back – but so is virus spread

The economic recovery in the United States has also been quicker than initially expected. U.S. Industrial production – a key driver of Canadian manufacturing activity as well – likely continued to improve in June. The ISM manufacturing PMI for the US surged to 52.6% during June from 43.1% a month before, with 13 out of the 16 manufacturing industries reporting growth. Hours worked in manufacturing sector increased 6%. US. Retail sales also likely built on the 18% bounce-back in May (although were still probably down sharply from a year ago). But the clear concern south of the border is that the stronger-than-expected initial bounce-back in economic activity has come at the expense of virus containment – with alarming acceleration in virus spread in some regions, and re-imposition of some containment measures, clouding the near-term outlook once again. 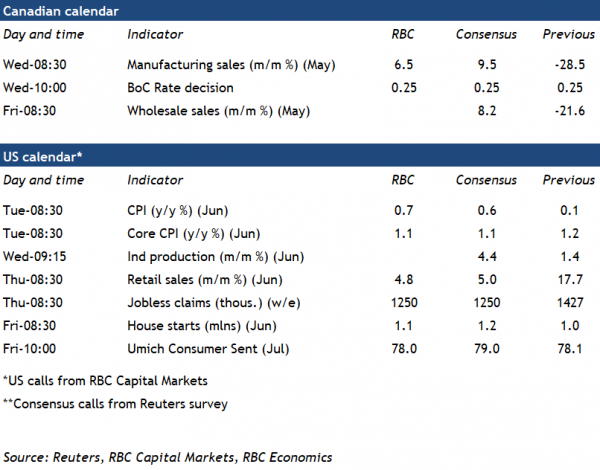