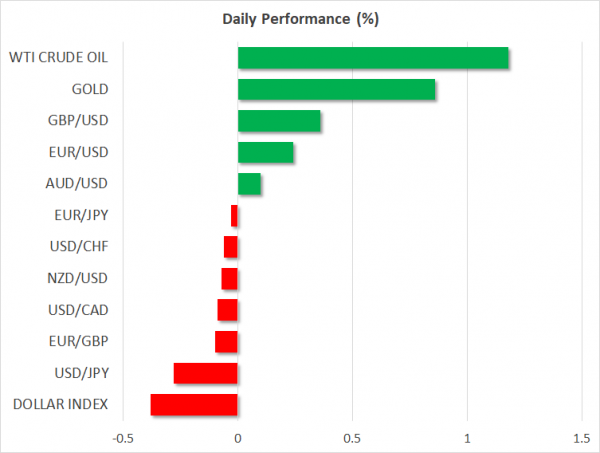 Dollar on track for worst month in decade

The US dollar is headed for its worst monthly performance in nearly 10 years as economic and political woes in America increasingly undermine the world’s reserve currency just as the outlook elsewhere brightens somewhat. The US economy collapsed by a record 32.9% on an annualized basis in the second quarter. That’s only marginally better than Europe, but with the Eurozone recovery gathering pace and the US’s faltering, the growth picture is not looking too favourable for the greenback right now.

A second consecutive uptick in the weekly jobless claims yesterday underscored the Fed’s fears that the US recovery is slowing, meaning it’s almost certain more stimulus will be forthcoming. Expectations of a prolonged period of accommodative monetary policy pushed long-term Treasury yields towards the March lows today, dragging the dollar down.

Adding to the dollar’s troubles, Congress is no nearer to finding a compromise deal on a new round of virus relief measures. The best hope for avoiding a fiscal cliff is a temporary extension to the $600-a-week unemployment benefit, probably at a reduced size, though even that has met opposition from both sides of the political spectrum.

If the US wasn’t facing enough uncertainty, President Trump raised the idea of delaying the November presidential election on concerns about the reliability of postal votes. His suggestion was quickly shot down by top Republicans, but this has nevertheless given way to unease about the possibility of Trump contesting the election result if he loses.

The euro and the pound extended their northward charge on Friday. The two currencies are set to finish the month with gains of almost 6% versus the greenback, with the Australian and New Zealand dollars not too far behind. The Canadian dollar is lagging significantly behind amid a pause in the oil rally and worries about the US, which is Canada’s largest trading partner by far.

The resurgence of the coronavirus in America has cast Europe in a more positive light where the reopening of economies is going far more smoothly. Although there are growing signs that a second wave may also be underway in some European countries as well, investors seem to think the situation will not get out of control on the same scale as it has done in the US and in some other places.

Markets also don’t appear to be too fazed by the escalating virus outbreak in Australia and the aussie was lifted today by a better-than-expected manufacturing PMI print out of China. Clearly investors are no longer worried about nationwide lockdowns making a comeback and are hoping that the various safety rules in place, as costly and prohibitive as they are, will allow economies to chug along with the aid of stimulus until a vaccine becomes available for the masses.

Japan is in a similar predicament as Australia on the virus front but the main problem for traders as far the yen is concerned is the threat of currency intervention by Japan’s finance ministry. Government and Bank of Japan officials held a meeting today to discuss the yen’s appreciation against the dollar, prompting a pullback in the pair.

Dollar/yen was last trading only marginally lower, having earlier slid to a 4½-month low of 104.17. But the greenback’s broad weakness boosted gold yet again, helping it advance towards the $1,975/oz area.

The big four tech companies – Apple, Amazon.com, Alphabet and Facebook – all beat their earnings estimates on Thursday when they reported their Q2 results after the US market closed. E-mini futures for the Nasdaq Composite were last up 0.9% as the tech-heavy index was bolstered by the upbeat results, but S&P 500 futures were tracking only a 0.25% gain at the open, suggesting other sectors were struggling.

European shares in particular took a heavy beating yesterday on poor earnings, though the mood has improved today.

With the earnings calendar being relatively lighter today, the focus later on will be on the personal income and spending numbers for June due out of the US. 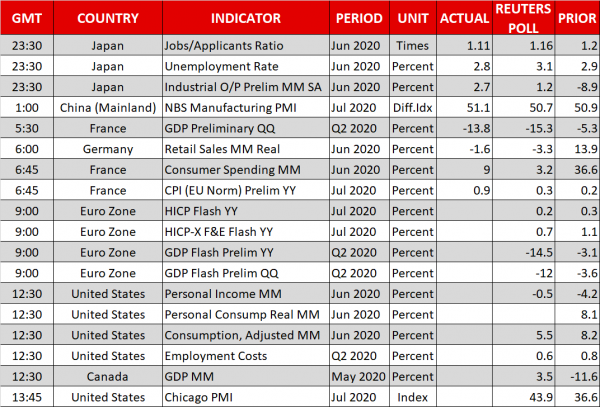