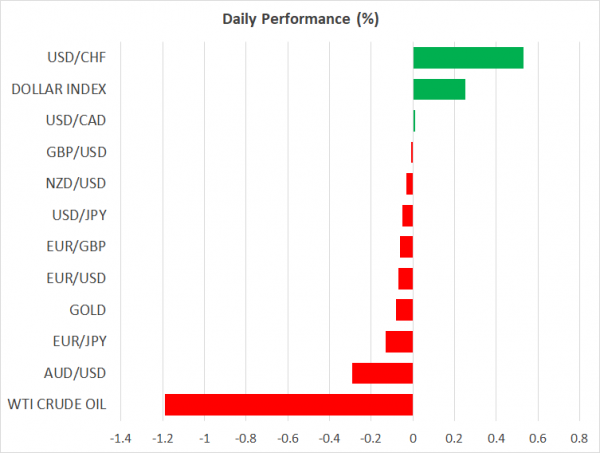 Dollar shows signs of life, but is it just flows?

The world’s reserve currency staged a comeback on Friday and continues to lick its wounds at the start of the new week, shrugging off a credit ratings downgrade by Fitch. The ratings agency revised the AAA outlook on the United States to negative from stable, citing deteriorating public finances and the lack of a credible plan to bring the mammoth deficits under control.

Sadly, this might be a harbinger of things to come, and more ratings agencies may arrive at the same conclusion soon: even with negative real rates, the trajectory of US debt seems increasingly unsustainable. And fixing it won’t be easy if policy gridlock persists, as neither party is likely to secure a supermajority in the Senate after the election to evade the ‘filibuster’ and implement its agenda. This, in contrast with Europe, where the EU recovery fund may spark a wave of positive ratings revisions.

But the dollar almost didn’t notice, which might come down to profit-taking and short-covering after such a steep downfall over the past month. Is this recovery therefore a dead-cat bounce? Possibly, in an environment where safe-haven demand for the reserve currency is evaporating as markets calm down and falling US yields are eroding what little interest rate advantage the dollar had left.

Indeed, the yield on 5-year US Treasuries hit a fresh record low last week, most likely on expectations for a slower economic recovery and a more aggressive Fed. Lower rates are a blessing for stocks though, and the likes of the S&P 500 and Nasdaq both closed near their recent peaks after heavyweights such as Apple (+10.5%) and Amazon (+3.7%) reported blockbuster earnings.

Besides Friday’s US jobs report, the biggest variable for both the dollar and stocks this week will be whether Congress reaches a compromise on another relief package. Crucial benefits such as the extra $600/week in unemployment aid have expired already, and lawmakers have made little progress on striking a new deal. If this deadlock continues, millions of Americans will take a substantial income hit, which in turn could kneecap consumption.

Admittedly, some deal will probably be hashed out before the Senate goes on recess at the end of the week. The stakes are too high, and no politician wants to be blamed for shattering the recovery, especially with an election three months from now. That said, the longer we go without clear signals that a deal is within reach, the more nervous markets might become.

Lockdown blues in Australia ahead of RBA meeting

Just when it seems that some country has made strides in defeating the virus, it rears its ugly head again. Australia is currently experiencing a major second wave, with daily infections being much higher than their peak in March, leading the state of Victoria to impose a new curfew and business restrictions.

The aussie hasn’t fallen much on the news, but it might be a different story if this leads the RBA to adopt a more cautious tone at its meeting early on Tuesday. Incoming Australian data have been very encouraging, but with the health crisis moving in the wrong direction, policymakers might double down on their commitment to support the economy. A decisively dovish message could clip the high-flying aussie’s wings.

As for today’s highlights, the ISM manufacturing PMI in America might attract attention, alongside some remarks by the Fed’s Bullard (16:30 GMT), Barkin (17:00 GMT), and Evans (18:00 GMT). 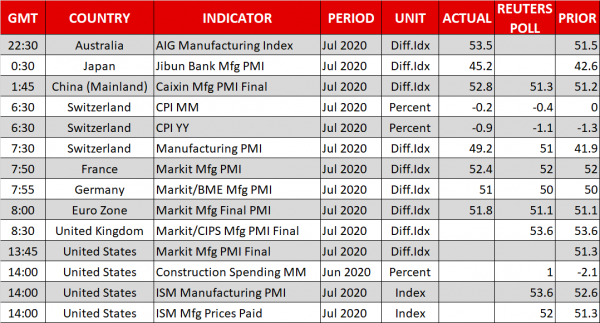 EUR/USD Trading Near Inflection Zone At 1.1880