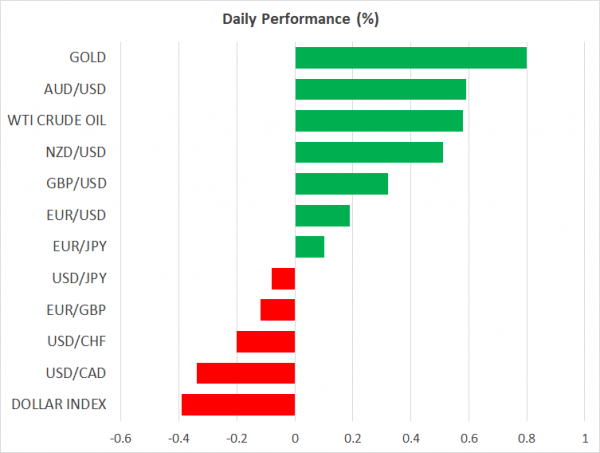 Those hoping for a summer lull in financial markets come August have likely been left disappointed, as there has been absolutely no shortage of volatility so far this week. Stock markets started Tuesday’s session in a cautious mood, which allowed the defensive US dollar to recover some ground early on, before it all got turned on its head.

The reversal started after Senate Minority leader Chuck Schumer – arguably the second most important Democrat in Congress – said that the talks around a new relief package are finally “moving in the right direction”. That was apparently the catalyst many vigilant investors were waiting for, with stock markets moving higher in the aftermath and the dollar falling back down.

The pain for the dollar was amplified by a substantial drop in US Treasury yields across the entire maturity spectrum, with the yields on three-, five-, and seven-year notes closing at record lows. That in turn reduced even further what little interest rate advantage the dollar has left, diminishing its appeal.

Overall, this is a tough market to navigate. The bond market is flashing warning signals about the recovery and is implying the Fed will be forced to do much more for an even longer period. Recent price action suggests yield curve control is becoming a realistic possibility in the minds of many investors, who seem to be frontrunning that move.

But the lower yields fall, the less attractive bonds become, pushing asset managers that are looking for decent returns into riskier assets, such as stocks. In other words, one could say the stock market is rising for the ‘wrong’ reasons – not because most companies are doing great, but because the economy is so fragile that the Fed will have to keep showering markets with liquidity.

San Francisco Fed president Mary Daly signaled as much yesterday, indicating that the economy will need more support for longer as the pandemic has been ‘stickier’ than anticipated.

Of course, falling interest rates, a sinking dollar, and uncertainty about the future are a winning recipe for gold prices, which topped $2000/ounce for the first time ever yesterday. The yellow metal is continuing its relentless march higher on Wednesday, with the only strange part being the absence of any pullbacks in this uptrend.

A mild correction after such a powerful rally would have been more than natural, but dip buyers are waiting behind every corner. That is a sign of solid underlying demand, and reassuring news for the health of this uptrend.

While technical exhaustion and overbought conditions may eventually spark a retracement, it’s difficult to be pessimistic on the fundamentals of this rally. Positioning by large speculators is still far from record bullish, and even in a ‘worst case’ scenario where a vaccine is developed, the downside for gold may not be massive as rates will still stay low for many years. Plus, a vaccine may also hurt the dollar through the risk channel, helping bullion stay afloat.

Kiwi cheers jobs numbers, but beware of the RBNZ

Elsewhere, the New Zealand dollar got a small lift overnight after the nation’s unemployment rate for Q2 surprisingly declined, even though much of that was owed to unemployed people simply being counted as outside the labor force. The RBNZ meets next week, and probably won’t be happy about the kiwi’s gains. It already expressed discomfort with the exchange rate at its last meeting, so policymakers may talk it down more forcefully this time.

As for today, all eyes will be on the ADP employment report for July, which will give us a taste of what to expect from Friday’s nonfarm payrolls. The ISM non-manufacturing index will also be closely watched. Beyond these, markets will keep a watchful eye on the Congressional negotiations. 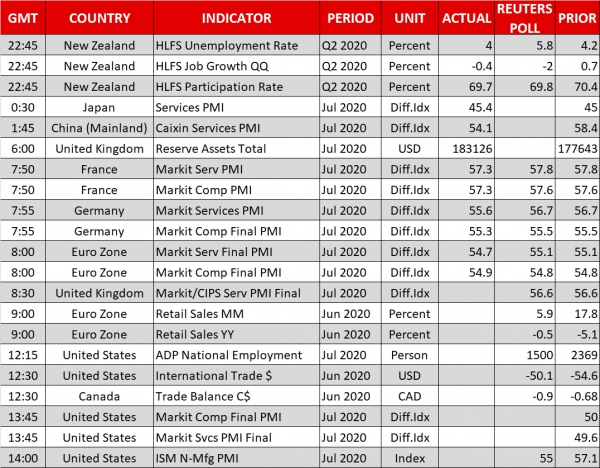