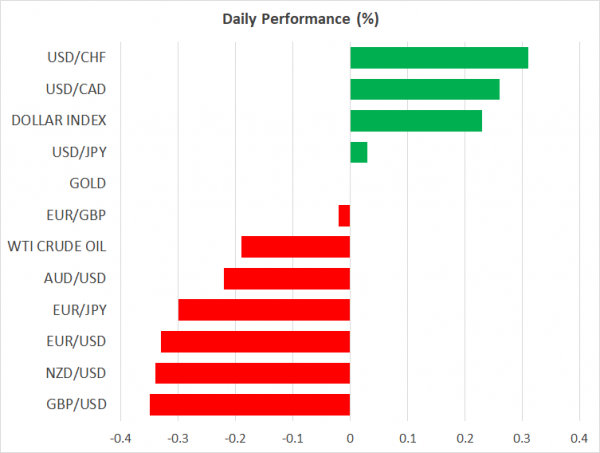 Nonfarm payrolls: A most uncertain one

The main event today will be the US employment report for July. The consensus is for the US economy to have added another 1.6 million jobs, pushing the unemployment rate down to 10.5%, from 11.1% previously. Many are asking how the consensus arrived at such a high NFP forecast given the barrage of headlines that the US recovery slowed in July. Two key elements can explain this.

First, this employment survey is conducted in the second week of each month, and if someone lost their job during that week, they would still be counted as ‘employed’ as long as they were working at any point earlier in the month. Second, there are apparently huge seasonal adjustments at play. Because many teachers and school staff stopped working earlier this year instead of June/July as per normal, that may artificially boost the NFP this month.

Combined, these imply that an outright decline in payrolls is probably off the table. But falling short of the rosy 1.6 million consensus is entirely plausible. The weekly Household Pulse Survey by the Census Bureau for example said 6.7 million Americans lost their jobs between mid-June through mid-July. While most of those happened in July and hence those people will still be counted as ‘employed’, the risk remains to the downside.

That’s also consistent with the weak signals from the ADP jobs report and the employment sub-indices of the ISM surveys. Blending everything together, a positive but disappointing NFP print relative to the 1.6 million forecast seems most likely. In this case, the dollar may come back under fire, though any losses may not be huge given how much pessimism has been priced in already.

Overall, recent NFP releases have generally only sparked short-term volatility in the dollar, with investors mostly fading the initial reaction, instead of igniting long-lasting moves.

Trump back on the offensive against China

Washington fired another salvo at Beijing overnight, after the White House moved to ban US transactions with WeChat and its owner, tech giant Tencent. That’s not all, as the Trump administration is also moving ahead with plans to delist Chinese companies on US stock exchanges unless those firms comply with the same audit standards American companies are subject to.

In other words, the ‘tech war’ is alive and well, with investors now bracing for China’s response. The result was a mild dose of risk aversion, with the dollar finding some haven demand and e-mini futures tracking the S&P 500 pointing to a slightly lower open today, after a 5-day winning streak that brought the index to just 1% from its record highs.

Speaking of record highs, the Nasdaq (+1.0%) hit another one on Thursday. The rally was spearheaded by Facebook (+6.5%) and Apple (+3.5%), with the latter coming close to becoming the first $2 trillion company in market cap.

Staying in the geopolitical arena, the US reimposed a 10% tariff on Canadian aluminum products yesterday, bruising the loonie. The Canadian government will announce its retaliation at 15:00 GMT today, but before that, the nation’s employment data will hit the markets.

More broadly, all eyes remain on Congress, where the stimulus negotiations are apparently going nowhere. President Trump has warned that if no progress is made, he might issue executive orders to address the economic crisis.

Finally, gold continues to hit record highs, in contrast to the Turkish lira, which touched a fresh all-time low today. 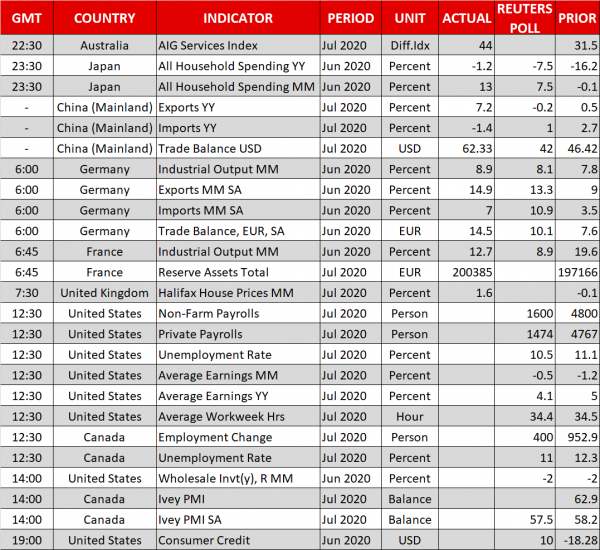