The Australian dollar has been on a red-hot streak since April, racking up gains of 15.4% in that time. However, the plucky Aussie has taken a pause and is unchanged in the month of August. Is this hiatus a temporary blip, or has the Australian dollar finally run out of steam?

Aussie fundamentals started the week on a sour note, as NAB Business Confidence fell to -14 in July, down from +1 beforehand. The indicator has eked out only one gain since November, as the business sector is clearly pessimistic about economic conditions. On Thursday, we’ll get a look at key employment numbers. The economy is projected to create 30.0 thousand jobs, which would be a huge drop from the previous release of 210.8 thousand. The unemployment rate is expected to increase for a fifth straight time, with a forecast of 7.8%, up from 7.4%. Later on Thursday, RBA Governor Philip Lowe testifies before a parliamentary committee. It has been a relatively quiet week for AUD/USD, but traders should be prepared for stronger movement on Thursday. 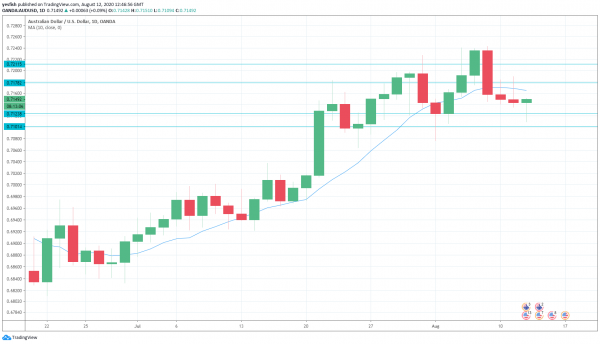 AUD/USD is trading at 0.7149, up 0.09% on the day. The pair lost ground late in the Asian session but recovered in European trade