The US stock market has staged a meteoric comeback, raising concerns about whether we are experiencing an asset bubble in the middle of a recession. While there is clearly a sharp disconnect between markets and economic reality, there are good reasons why. In short, central banks have killed bonds, and stocks are the only game in town. Even if this is a bubble, it could keep going for a long time in a world where the virus may be defeated soon but interest rates will stay low for many years.

The stock market is not the economy, even if the two are mixed up sometimes. What is good for the economy is clearly also good for stocks, but that does not mean the market needs a fantastic economy to flourish. The market can be pushed higher by other factors, a lesson that many people learned the hard way this year.

The main reason behind the epic comeback in US equity markets was the avalanche of stimulus unleashed by central banks. When interest rates are slashed to zero to stimulate borrowing and power up the recovery, that means the yields on government bonds fall sharply. Right now, most bonds have either turned into negative-yielding assets, or they are negative yielding once you factor in inflation over a long period. 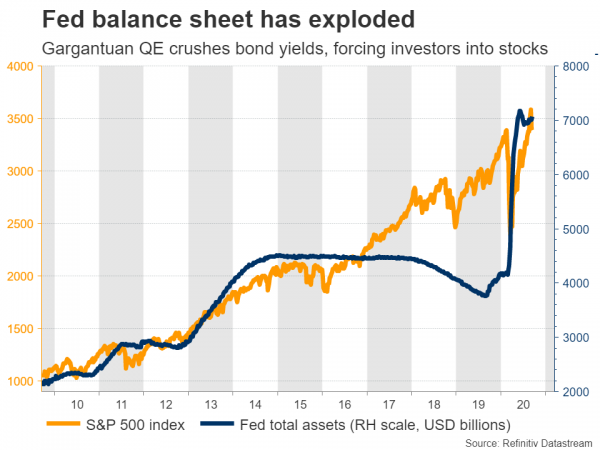 Consider this: would you buy bonds that are guaranteed to lose you money, or would you rather take some more risk and go for stocks that at least might deliver positive returns over time? In short, central banks have made bonds – which are by far the largest asset class in the world – virtually ‘uninvestable’. Stocks are therefore the only alternative left. All the money being printed has to go somewhere.

Beyond all the stimulus being pumped by central banks, there are few other factors at play. For instance, governments around the world have rediscovered they can spend money without any dire consequences. When massive monetary stimulus meets massive fiscal stimulus, that is rocket fuel for stocks.

And this spending genie is not going back into the bottle anytime soon. The fear of runaway debt has faded now that interest rates are very low or negative, and politicians are quickly learning that spending huge sums on social programs is quite popular with voters. Fiscal discipline is dead. 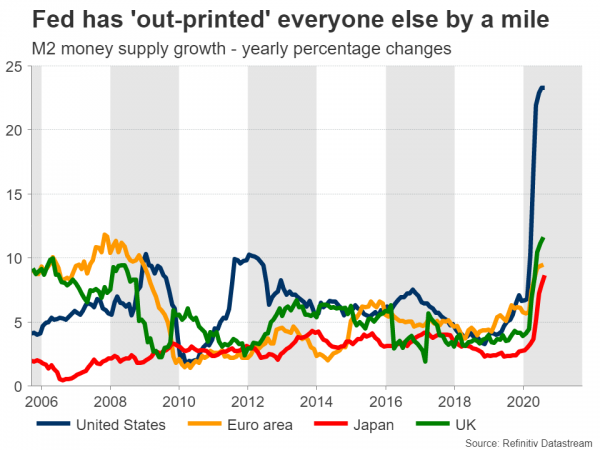 While the politics of the upcoming US election season may prevent Congress from passing a new relief package right now, another package will come eventually, which is probably why the market has not panicked over this. This could also be what fuels the next major push higher in the market.

Then there’s the explosion in retail trading to consider. The stay-at-home crisis attracted several small traders to the party, with estimates suggesting that this group now accounts for 20% of all equity trading. Not only is this huge by itself, but this group has also discovered a way to move prices even more than just buying stocks: through options. 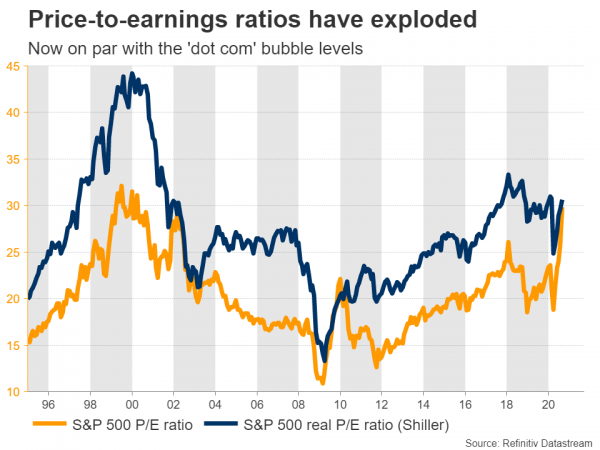 Without going into too much detail, options have embedded leverage into them, so if small investors are betting a stock will go up through options, they can push the price higher even more powerfully than just buying it. As the price of the stock starts to move up, the dealers (market makers) that sold those options have to hedge their positions to avoid losses, and that is done by buying the underlying asset. Hence, buying bullish options in such huge volumes can almost create a positive feedback loop, where buying forces more buying.

This theory goes a long way in explaining the unrelenting stock market fever we experienced over the summer.

In the midst of this euphoria, many people are looking at valuation metrics that have gone through the roof and conclude that the stock market is simply overvalued. The price-to-earnings ratio of the entire S&P 500 is at levels that we have only seen during asset bubbles, and the value of the entire stock market relative to the size of the US economy is at record highs. 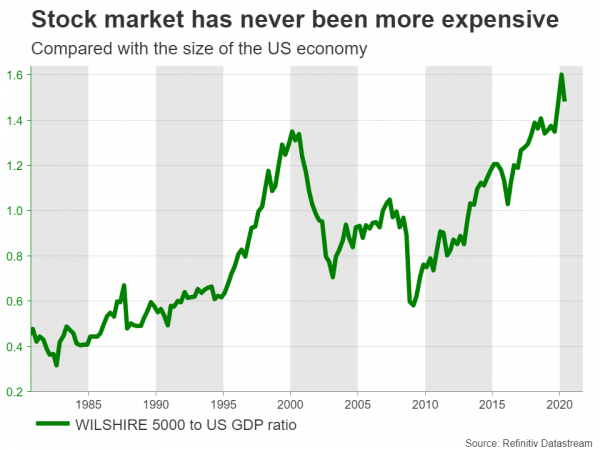 It sure looks like a bubble. But that doesn’t mean it cannot be inflated further or that it will pop soon. For one, we have never had so much policy support. Second, if there’s nowhere else to park your money anymore, then we might be in a situation where valuations will stay expensive for a long time.

Most importantly, unlike other recessions, the Fed has reassured investors that even if the economy improves drastically, it still won’t raise interest rates for a long, long time. Consider for a moment the scenario where a covid vaccine is developed and distributed by mid-2021, but rock bottom interest rates stay with us until 2024. It’s a jackpot for risky assets – the best of all worlds.

The main near-term risk is the US election. There are two scenarios that might hurt the markets. The first is a Democratic sweep, where Joe Biden wins the White House and the Democrats also gain control of the Senate, allowing them to implement their full agenda, which presumably includes raising corporate taxes. 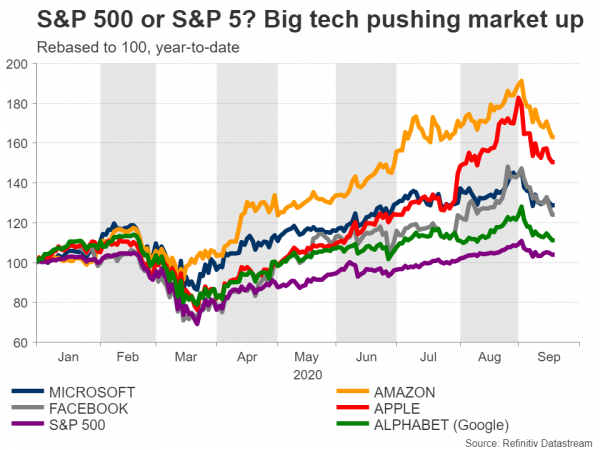 But considering how American politics work, it’s highly questionable whether such legislation will ever see the light of day. The real risk might be Biden winning the White House but Republicans keeping the Senate, setting the stage for years of political gridlock where nothing passes.

Another threat is Trump restarting the trade war with China if reelected. An even more serious one is a second virus wave hitting before a vaccine can be deployed that overloads hospitals, forcing new lockdowns. Thankfully, that hasn’t happened so far, although European virus numbers are spiking again.

It’s a mania, but that doesn’t mean much

All told, while there are some near-term risks surrounding equity markets, like election uncertainty and the prospect of the US recovery stalling without another relief package, the ultimate destination seems crystal clear.

Valuations have shot through the roof, but for solid reasons, and could get even more expensive in this brave new stimulus-packed world.