U.S. – The Recovery Shifts In to Low Gear

U.S. financial markets had a bumpy ride this week. The highs early on were followed by a sharp drop after Chairman Powell failed to quench investors’ thirst for more liquidity. The declines were primarily led by large cap technology stocks, which have so far made major gains during the crisis. As of writing, the S&P 500 is on track to end the week about 0.1% lower compared to last week’s close.

On the economic front, the Federal Reserve indicated that there will be no interest rate increase until at least end-2023. The Fed said that it would not tighten policy until inflation is higher than 2% for “some time”, a move away from its previous policy goal of “maximum employment” and “symmetric 2% inflation”. This announcement makes the Fed’s desire to make up for past inflation underperformance more explicit. However, the Fed continued to remain vague on the period over which it seeks to achieve higher inflation. Despite the dovish stance, markets thought it wasn’t dovish enough. Equities slid, as investors were hoping for the Fed to magnify its QE by announcing the purchase of more government bonds.

In terms of economic data, retail sales strengthened for the fourth straight month in August with many of the major categories being very close to or even above their pre-pandemic level of sales (Chart 1). However, the momentum is fading as sales grew by a meagre 0.6% month-on-month in August, down from 0.9% in July. Cooling pent-up demand and a decline in income for a significant share of the population (due to CARES Act payments being stopped in end-July) may be responsible for this slowdown. However, the strength in retail has been uneven as it masks the continued weakness seen in clothing, restaurants and bars and department stores. It is important to keep in mind that some of the hardest-hit areas, especially high-touch services (recreation, childcare and haircuts etc.) are not included in these data.

Turning to the housing market, starts weakened by 5.1% month-on-month. The decline was primarily driven by the multi-family segment, which fell by 23% on the month, reversing much of the gains seen during the summer. Single-family starts, on the other hand, jumped by 4.1%. Construction for single family homes is continuing at a solid pace on the back of perceived health risks posed by dense living as well as more permanent work from home policies. The housing market is likely to see slower gains in the coming months as economic recovery slows and pandemic-induced uncertainty abounds.

Meanwhile, the labor market recovery has slowed down (Chart 2). Initial jobless claims (860k) were broadly around consensus, down 33k from last week. Continuing claims came in at 12.6 million, beating the consensus (13 million) and down 1 million. Moreover, the number of people collecting unemployment benefits edged higher in late August. At almost 30 million people, the total remains incredibly high. Job growth is expected to be slower through the remainder of the year, with a full labor market recovery not taking months, or quarters, but years. 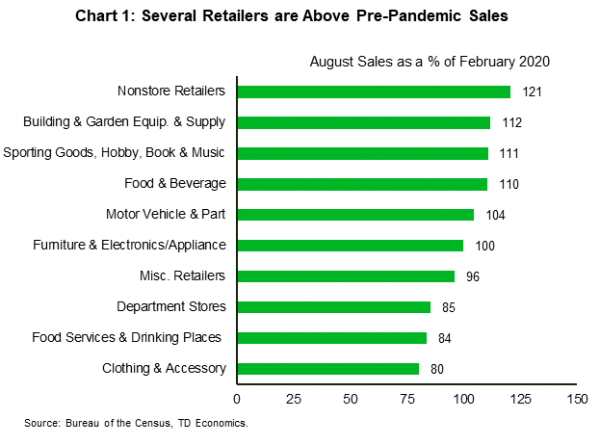 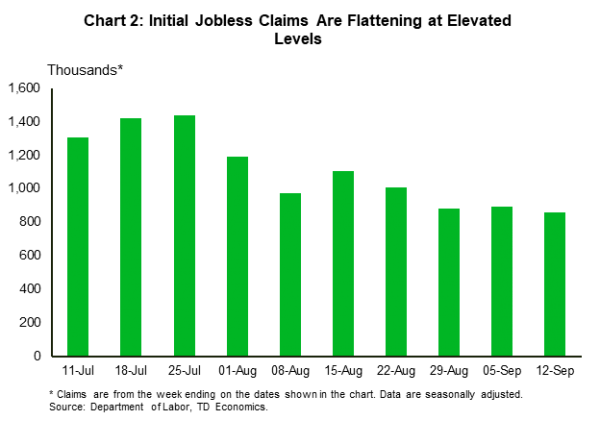 Financial markets were mixed this week, with risk sentiment alternating on global central bank meetings, ongoing uncertainty around U.S. fiscal policy, and the upcoming election. The S&P/TSX ended the week almost flat (as of writing). Turning to oil markets, WTI prices recorded a 9% gain on the week. This was driven by a bullish report from the Energy Information Administration (EIA) which revealed a larger-than-expected crude oil inventory draw in the U.S. Prices were also helped by messaging from major OPEC+ producers on their commitment to rebalancing markets.

Domestically, news flow focused on the U.S. decision to reverse tariffs on Canadian aluminum – a welcome development that should prevent an ill-timed drop in exports for aluminum producers, namely in Quebec (see our latest Provincial Economic Forecast).

Data releases this week point to a recovery that remains intact, but with varying “shapes” across different sectors. Our latest Quarterly Economic Forecast imbeds a Nike “swoosh”-shaped recovery – a middle ground between the V-shaped snapback seen in areas such as housing, and the more elongated recoveries observed in other sectors.

At one end of the spectrum, existing home sales clocked in another 6.2% month-on-month gain in August, leaving overall sales 20% above pre-pandemic levels. Average prices, likewise, saw a 4% boost (17.8% year/year) as markets remained broadly in sellers’ territory. The stark divergence between housing market activity and other economic indicators is driven by a combination of pent-up demand, borrowing rates, and stable incomes. The solid rebound will support the economic recovery. That said, pent-up demand is unlikely to have lasting power, giving way to some pullback in activity in Q4.

Elsewhere in the economy, retail (+0.6% m/m) and wholesale trade (+4.3%) also recorded further gains in July. Retail sales remained above pre-pandemic levels for a second consecutive month, with a further 1.1% increase anticipated by Statistics Canada in August. However, this swift rebound in retail sales masks diverging trends across the subsectors. For instance, gasoline and clothing sales both were still 14-15% below February levels.

All told, positive data received this week are a welcome sign, but the recovery appears to be slowing. More timely indicators (such as Google’s mobility reports, TD spending data) suggest that momentum is tapering off as we enter the autumn season. Perhaps best capturing lingering economic slack is this week’s CPI inflation release for August, which at 0.1% y/y, underperformed consensus expectations for a second consecutive month. Although firmer core inflation measures provide some respite, the persistent weakness in headline measures and notable softness across some hard-hit spending indicators (i.e. clothing, recreation, travel) is a reminder that we have a long way to go before pandemic-induced losses are fully recouped. 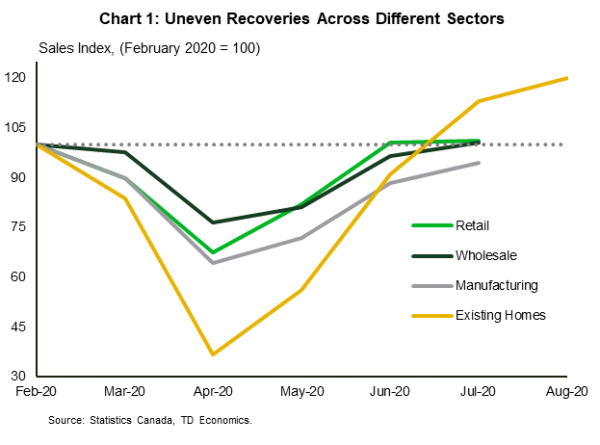 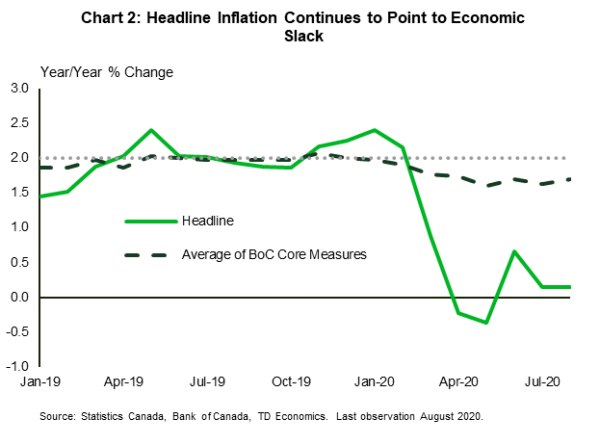