Major U.S. equity markets continued to edge lower this week, with the S&P 500 down 1.8% from last Friday’s close as at the time of writing. This disappointing performance, which extends the losing streak to four weeks, came alongside a recent uptick in COVID-19 cases and growing evidence that the economic recovery has shifted into lower gear.

On the data front, the housing market – one of the brightest areas of the U.S. the economy – continued to be a source of good news. Existing home sales rose by 2.4% in August to 6.0 million units (annualized), which marked another post-Great Recession record. The improvement spanned both single and multi-family segments and all four Census regions, though gains in the latter were concentrated in Northeast (13.8%). Meanwhile, in part due to a low inventory backdrop, home price growth accelerated sharply into double digit territory, with the median existing home price up over 11% in August relative to a year ago. New single-family home sales were even more impressive, rising 4.8% even after hitting the highest level in nearly 14 years in July. The level of new home sales has only been higher in the frenzied housing market of the mid-2000s that preceded the Great Recession (Chart 1).

As we argued in a recent publication, housing can’t remain divorced from the broader economy forever (see here). While we expect record-low interest rates to continue to support demand as the economy recovers, the acceleration in prices goes in the other direction. Diminished affordability will become a barrier to further increases. At the same time, the end of mortgage forbearance programs could result in more distressed sales in the quarters ahead. Finally, historically low population growth will weigh on demand growth once the initial recovery phase has played out.

Indeed, the jobs recovery is already showing signs of fatigue. After a relatively steady drop in the months prior, initial jobless claims have remained near the 900k mark since the end of August. Last week they rose modestly to 870k, extending the mostly-flat trend. On a more positive note, continuing claims decreased by 167k to a still-elevated 12.6 million for the week ended September 12th (this data is delayed by a week). Meanwhile, the number of people collecting unemployment benefits from ‘all programs’ edged lower, but remained elevated at 26 million at the start of the month.

All in all, the labor market is generally still moving in the right direction, but it is doing so at a much slower pace. The capricious nature of the health crisis remains a downside risk, with a still-elevated infection spread to continue weighing on the recovery (Chart 2). In the meantime, without additional income supports, spending could take a tumble as the high numbers of unemployed are forced to reduce consumption. With the Fed clearing up its stance (and limitations) on monetary policy last week, the ball is clearly in Congress’ hands. On this front, yesterday it was announced that Treasury Secretary Steven Mnuchin and House Speaker Nancy Pelosi have agreed to restart stimulus talks, in what marks a small positive step in the right direction. 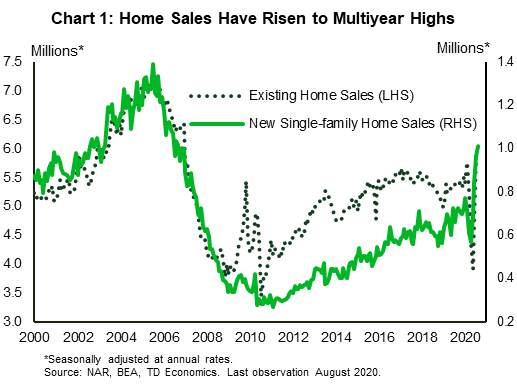 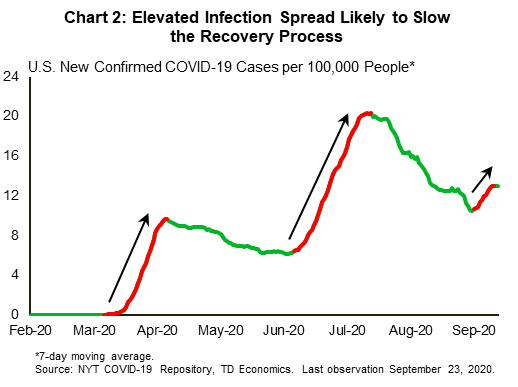 Canada – Government Lays Out its Plans Amidst Second Wave of Infections

Financial markets continued to sour this week as Covid-19 infections rise around the world. As a result, the Canadian dollar weakened, and the TSX was down on the week (at time of writing). Like many other countries, Canada is in the grips of a second wave of Covid-19 infections (Chart1). Canada’s government, meanwhile announced a proposal for additional income supports this week but will require parliament to agree.

The Liberal minority government outlined its broad agenda for the current session of parliament in its Throne speech this week (see commentary). It plans to focus on four pillars: tackling the pandemic, short-term personal income supports, fostering a sustainable economic recovery, and creating a more equal society. This is a high-level thematic document, with nitty-gritty policies, along with their price tags, to be fleshed out later. Given the government’s minority status, these also need to be negotiated with opposition parties to garner enough support to pass.

The government wasted no time in announcing specifics on at least one element of its agenda. It is proposing increasing income support in the new programs meant to replace CERB. Both the Canada Recovery Benefit and expanded EI will now offer $500/week as floor in weekly benefits, unchanged from CERB. Applicants will still be required to search for work, like in regular EI. The program length is unchanged at 26 weeks. This is more generous assistance than we assumed in our latest forecast, and so if it is passed presents an upside risk to our view on personal income and consumer spending.

The expanded program would appear to appeal to demands made by the NDP, which would be all the support needed to pass the legislation. Further meat on the fiscal plan is expected to be laid out in a yet-to-be-announced Fall Fiscal Update. Many are concerned about the sustainability of Canada’s federal finances, with the deficit currently at $400 bn (around 20% of GDP as of Q2’s Covid-depths). However, a major credit rating agency reaffirmed Canada’s AAA rating and stable outlook. The agency said that Canada continues to have space to provide some additional stimulus and maintain its AAA rating.

Further assistance is warranted, with many areas of the economy struggling under the realities of life in a global pandemic. As our report, “Uneven Paths: Employment Recoveries By Industry” outlined, sectors that involve many people gathering closely together (arts & entertainment, travel, etc.) are likely to struggle to gain traction until the pandemic is contained. This means the job market recovery is likely to be slower and more uneven than it has been in the months early in the re-opening process.

Indeed, labor demand at small businesses appears weak according to the September CFIB Business Barometer. While the headline index was unchanged from August at 59.2. The near-term hiring and capital spending plans remained below their respective pre-crisis performance. Only 15% of respondents were planning to add workers to their payroll in the next three to four months, lower than the share of businesses planning to cut jobs (25.6%) (Chart 2). 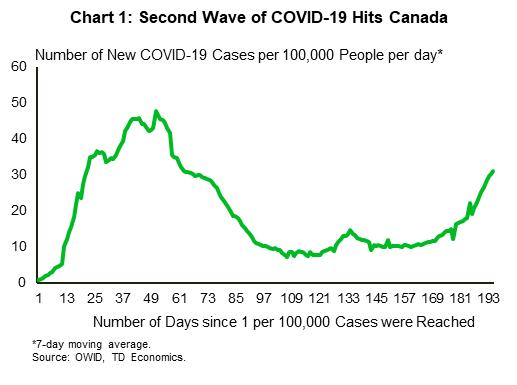 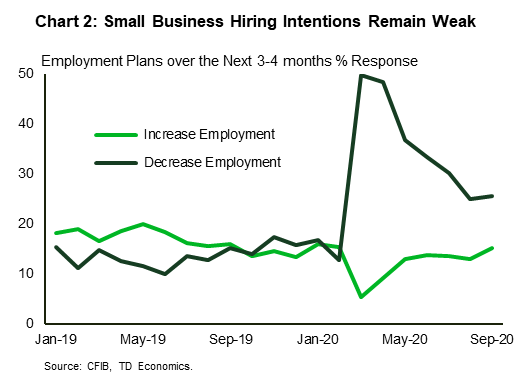 Consumer spending probably slowed again in August, with the boost from continued growth in employment offset by a waning of fiscal support. Even with slowing, spending is on track for a sharp increase in Q3 on a q/q basis. The slowing could be ominous for Q4, however, particularly if there is no “Phase 4” fiscal package. Income probably fell in August, dragged down by the expiration of supplemental unemployment benefits. The PCE price index likely accelerated, including at the core level. The net of recent COVID-related swings still appears to be slowing. We estimate core prices were up 1.4% y/y in August, up from 1.3% in July and as low 0.9% in April but still down from 1.9% in February (pre-COVID). 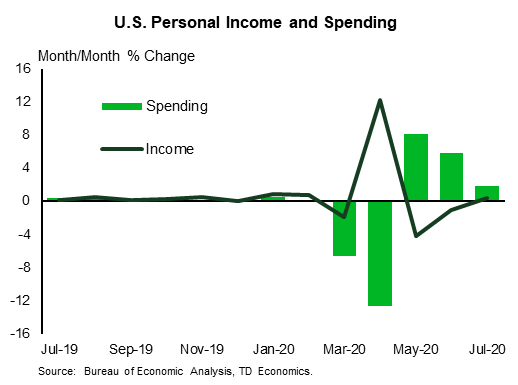 More regional manufacturing surveys for September will be released before the ISM report on Thursday, so expectations could change, but most of the surveys already released have signaled strengthening. We forecast an increase to 56.5 from 56.0 in August. That said, we suspect momentum will fade as fiscal support wanes. 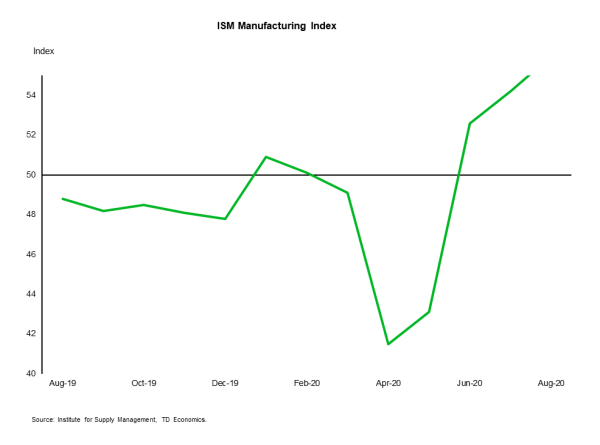 Payrolls probably rose fairly strongly by pre-COVID standards (forecast: 400k), but with the pace slowing again, and the level still down around 11 million since February. We are assuming a 200k seasonally adjusted decline in government payrolls, due largely to weaker-than-usual education hiring at the start of the school year. We expect the downtrend in the unemployment rate to stall, with relatively modest employment growth offset by a rise in the participation rate as active job searching among laid-off individuals picked up. Average hourly earnings likely continued to show a net pickup due to mix shifts—with more net weakening in low-wage than high-wage jobs boosting the average level; the 12-month change was around 3% through February. 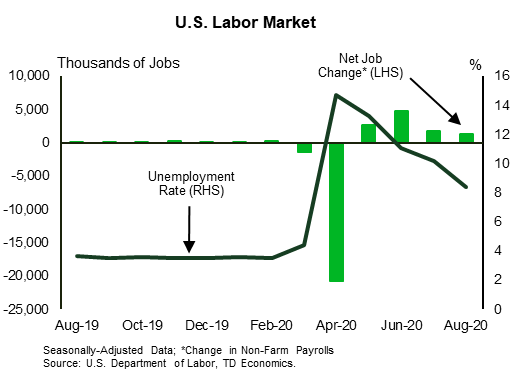 TD looks for industry-level GDP to rise by 2.5% in July, below StatCan estimates for a 3.0% advance. This follows a stronger than expected performance in May/June and if realized would leave economic activity 6.5% below levels from February. Goods-producing industries will be led by another solid increase in manufacturing and residential construction while energy should provide a slight offset, with monthly crude-by-rail exports falling to their lowest level since 2012. Service sector growth will be weighed down by the muted performance in retail trade, but a record month for real estate transactions and continued recovery in restaurant spending will help support growth. We should still see Q3 growth in the low-40% range even with the expected slowdown, thanks to a strong handoff from Q2, but momentum will be much weaker going forward with labour market data showing further deceleration in August. 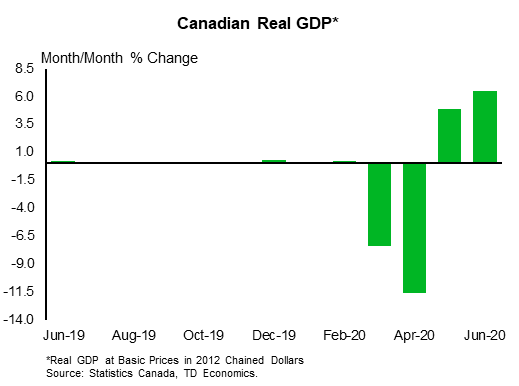