Dollar Steadies As Trump’s Health, US Stimulus In Focus 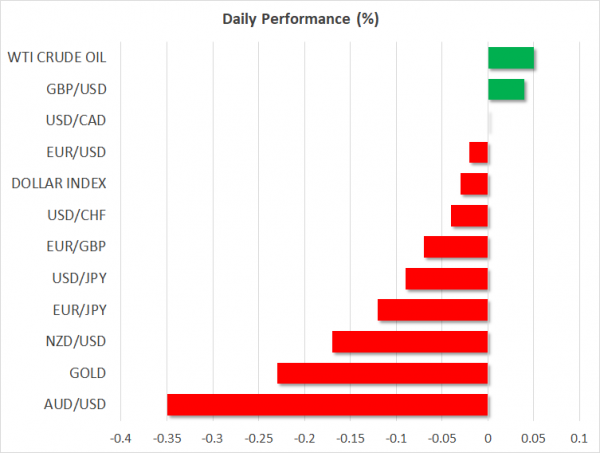 Relief as Trump returns to the White House

Markets were calmer on Tuesday as the panic over President Trump’s health subsided further while negotiations for a new coronavirus relief bill continued. Asian stocks got off to a positive start, lifted by news that Trump had been discharged from the Walter Reed Medical Center after spending three days receiving treatment for COVID-19. But the gains were modest and European and US stock futures were mixed amid ongoing speculation about the severity of his illness.

Contradictory reports from Trump’s physicians as well as from the White House about the seriousness of his condition have added to the mystery surrounding his diagnosis and recovery. What is clear is that Trump is not out of the woods yet and if the President and his team continue to downplay the virus, there is a risk his health could deteriorate again if he goes back on the campaign trail in full force.

Trump has already been criticised for endangering his Secret Service agents when he went for a drive-by to greet his supporters during his hospital stay. Hence, how he chooses to respond in the next couple of weeks to upcoming events such as the second presidential debate will be watched closely and is bound to keep markets on edge.

One eye still on fiscal stimulus

But as investors try to make sense of the increasing unpredictability of the 2020 US election and although Trump catching the virus has thrown a spanner in the works, what matters more for the markets is whether or not there will be another big fiscal stimulus package.

Talks between House Speaker Nancy Pelosi and Treasury Secretary Steven Mnuchin are ongoing as the two sides try to bridge the gap on the size of the package. There is growing hope that a deal in the range of $1.5-$2.2 trillion is possible and that would be large enough to keep markets happy.

But until then, any bounce in risk appetite is likely to be limited, with stocks probably struggling to break outside of their sideways range.

It’s been a similar story for the currency markets with the election uncertainty and rising virus cases in Europe and other regions putting the brakes on the impressive rallies such as that of the euro and the aussie.

The Australian currency was the worst performer today after the Reserve Bank of Australia flagged further easing at its monetary policy meeting. The RBA indicated that lowering the high unemployment rate will be its priority as Australia’s recovery hits a bump in the road.

The US dollar meanwhile was flat against a basket of currencies as it moved off a two-week low. Although the greenback has pulled back somewhat since the end of September, there are too many unsettled questions that have yet to be resolved and until their outcome is known, investors are unlikely to be deserting the world’s favourite reserve currency in big numbers.

One of those unresolved matters is Brexit and signs that the UK and the EU are determined to keep talking until they reach a deal is supporting the pound, which brushed the $1.30 level earlier today. Optimism for a Brexit trade deal has risen after Boris Johnson and EU Commission President Ursula von der Leyen agreed on Saturday to intensify the negotiations despite the recent stand-off.